Buck and Ken at ease

As an actor you are creating with every living breath. Ken Farmer is a guy who has been creating characters and breathing life into the written word for many years. What happens when an actor becomes a writer? Well, sometimes guys like Dirk Bogarde make it. Sometimes they don’t. Ken Farmer made it, and he made it big. What do you need to make that happen? Well Ken got himself a fine writing partner in the form of Buck Stienke. The two of them crafted a series of books that hit the spot for readers around the world.

Ken Farmer, along with Buck Stienke, runs a publishing company called Timber Creek Press, a growing concern with bestsellers by the bushel. Alex Cord of Airwolf fame and Steve Daniels are two of the best known names at home with Timber Creek. I think it’s safe to say that Ken and Buck will be running a leading independent very soon.

Now, I am lucky enough to have interviews with these two powerhouses of the literary world. An interview with each singularly and an interview where I will attempt to grill them together. The heat is on…

Q) Tell me about yourself, Ken. Experienced actor? Writer? Veteran? How does it feel to have achieved so much?

A) (laughs) Well, yes, forty years as a professional actor, but I never made the ‘A’ list. I worked enough to make a living and receive a monthly retirement check. I started re-writing then writing screenplays and teleplays because I found I had a knack for it. I suppose my mind works in such a way that I tend to hear all the voices (characters) as they talk. It sounds right or it doesn’t.

I’m a USMC veteran. A happenstance. I had attended the University of Oklahoma as a freshman in ’59. I played on the football team (they actually had a freshman team back in those days), but I got mono after spring training, and missed my finals because I was in the hospital. I went to work for Shell Oil in the seismograph division in eastern Oklahoma. At the end of the summer, my best friend from high school, Dennie Clark, called me and said, “Hey, I just joined the Marine Corps, come go with me.” What the hell. If I’m going to serve my country in the military…it just as well should be the best. So we went to Parris Island in September. They found out I had played football at OU and said, “Private Farmer, you’re on the base football team.” What the hell?

When I got out of the Marine Corps, my high school football coach, Buddy Ryan, got me a scholarship at Stephen F. Austin State University in Nacogdoches, Texas. I finished there with BS degrees in Speech and Drama and Business.

Q) When did you start your professional acting career? 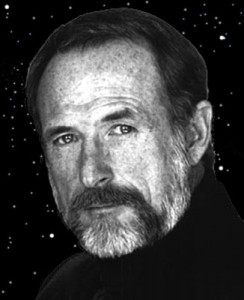 I started professional acting at the age of 32, because an agent thought I had a great look. That’s when the writing started.

Q) Right then and there the writing started for you? It was that simple? How did you build on that?

I had written (or ‘doctored’) a number of screenplays by the time I moved from Los Angeles back to Texas and met Buck Stienke at his gun store in Gainesville, Texas. I went in to buy a semi-auto pistol to take to the Conceal and Carry course. He knew I was an actor and script writer, and wanted to read some of my scripts. Long story short, he wanted to produce a script I had written, called “Rockabilly Baby,” and asked me to direct. What the hell.

We then started writing more scripts together. I found Buck to be very creative and I taught him the mechanics of screen/teleplay writing. We had written some twenty-five screen/teleplays when a friend from the Marine Corps, Major John Eastman (ret.) asked if we could adapt his novel, “Verdict in Search of a Crime” to a screenplay. I said, “Sure, John, send it down.” He sent us his three hundred and fifty thousand word novel. Oh, wow! Ten weeks later, we sent back a one hundred and twenty page screenplay. (It’s now going through the Disney system.)

Buck and I looked at each other and said, “Hell, we can write a novel.” That was almost three years ago; five complete and published novels (around 500,000 words) and we are nearing completion on novel six. What the hell?

As far as answering your previous question how it feels to achieve so much? I’ll let you know when that happens.

Q) What actually drove you to start writing? What was the catalyst for you?

A) I suppose, as with any writer, you have stories running amok in your head and they have to come out. It’s the curse of being right-brained, I guess.

The catalyst: Originally seeing scripts that weren’t written well. A lot of writers seem to lose the direction of ‘Just tell the damn story.’

Q) Tell me more about the way you write. How do you find inspiration? What is the key ingredient for you?

A) Inspiration? I am a voracious reader, and have been since I was a kid. I have thousands of books. We didn’t have a TV until I was fifteen, so it was either listen to the radio or read books. One of my favorite authors growing up (and still is) was Edgar Rice Burroughs. I still have almost all of his books. He said, “I have been successful probably because I have always realized that I knew nothing about writing and have merely tried to tell an interesting story entertainingly.” I like to feel I’m an instinctive writer and a good storyteller. But what do I know?

Q) Do you ever use your past experiences (cowboy actor, military man) as inspiration for characters in your books? I was wondering if sometimes you actually write about yourself.

A) Sure, all the time. Either myself or people I have known.

[pullquote align=”left” textalign=”center” width=”30%”]Unless what you write is from your heart, you’re peeing up a rope.[/pullquote]Q) What makes a great book for you? What are those musts to include?

A) This is a toughie. To me, it’s all about story. Content is king. Unless what you write is from your heart, you’re peeing up a rope. Doesn’t matter how many words you vomit onto pages every day, how much you study to improve your skills, how diligent you are with promotion, how many people you convince to like and talk about your book– the second you lose sight of the story as the thing that really matters, it’s over. As a writer, if our story doesn’t entertain me, it won’t entertain the reader either.

A good writer learns from other writers the way a kid goes into a candy story, steals what he has a taste for and can put in his pocket and take with him.

Q) Do you feel that you have written your best work or is that one still on its way to the world?

A) No. It’s kind of like the little boy in the room full of horse shit…gotta be a pony in here somewhere.

Q) Many of the writers I interview write alone. Why is it so important for you to have a writing partner?

A) In our case, we think alike but have different skills and background knowledge. We often finish each other’s sentences or one of us will start a scene, the other will finish it.

An example is our military novels– Buck is a graduate of the Air Force Academy and a jet fighter pilot plus an expert on all types of firearms. He brings that, I bring my experience in the Marine Corps (helicopters) and acting, characters and dialogue.

In our westerns, I bring an in-depth knowledge of horses, tack and Old West speech patterns. We write phonetically. Again, Buck is a firearms expert. As I mentioned earlier, after retiring as a pilot from Delta, Buck became a gunsmith and opened a gun store. We are both Constitutional conservatives and staunch patriots.

Q) Which of your works are you proudest of? 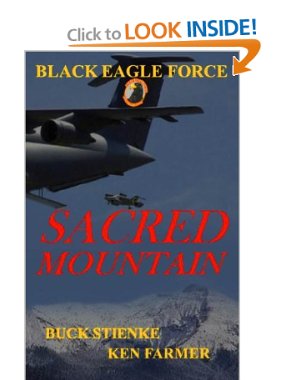 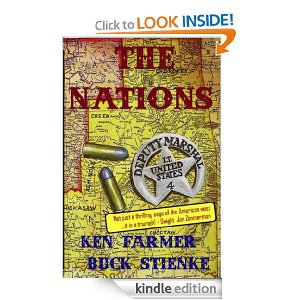 Q) Is there a book you wish you could have written?

A) Well, I guess a book I wish I would have written it would be “Tarzan of the Apes” by Burroughs, 1911. I have an original printing and have probably read it twenty or more times.

Q) How do you feel about the self-publishing trend? Is it the future?

A) I’m definitely for it. In traditional publishing, the publisher makes the money; in self-publishing, it’s the author…notwithstanding that content is always king. Crap is crap, no matter if it comes from one of the big six or a first timer publishing an e-book. However, the reverse is also true. A great book is a great book, no matter who publishes. Often times, a great book is ignored by the traditional publishers. See below. The public will decide if it’s a good or great book or not.

Let me reel off a partial list of authors who self-published their first novels:

Q) So, why did you start Timber Creek Press, Ken?

A) Our first novel was published by a traditional publisher. We saw how long it took, the arguments with the editors and illustrators, and the 15% royalty. Duh! After being in the film production business, it wasn’t really much of a stretch. We have published eight novels including the latest by film/TV star, Alex Cord – Days of the Harbinger.

Q) What’s your aim as a publisher? Many people say that the western is dead. Do you feel there’s still a market for western books?

A) Our aim is to work with talented authors, give them a much bigger piece of the pie, and try to create a domino effect of putting good books out there.

There will always be a market for westerns. The short-lived history of the Old West in America is unique in all the history of the world. Who isn’t captivated by cowboys, outlaws, lawmen, Indians, mountain men and the taming of a wild country? Much of the mystique has to do with the ‘attitude’ of those westerners. We call it the ‘Cowboy code’. “Head ’em up, move ’em out.”

Q) Where do you see the TImber Creek Press in ten years’ time?

A) Hopefully with a reasonably sized library, including our own novels. We are going after quality as opposed to quantity. We have published five; almost done with #6– the sequel to The Nations–another historical fiction western, Haunted Falls. Alex has started on his next novel also.

Q) Cowboy actor or author? Would you have preferred a major role in True Grit or to have written one of the best selling books of all time?

Ah, the impossible decisions. I would have loved to have that one to make back then, I assume you mean the original True Grit with John Wayne? (Yes) Today, no question…one of the best selling books of all time.

As an author, I have more control over my creation than I do as an actor.

Q) Thank you for your time, Ken!

A) Great meeting you, Nick.