Excerpt from The Gift Part 2 – The Air Force Years 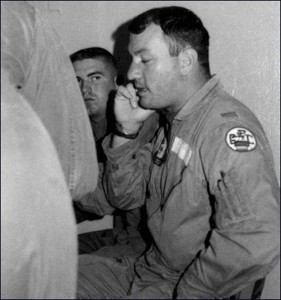 Getting my grade for a flight. David Kinton looks on

Flying over the jungle in a C-47

“It was during this last combat mission that I remembered something I promised myself when I was twelve years old. The promise had to do with the old Tarzan and other Jungle movies I watched back then. In almost every one of them a planeload of people would crash land in the jungle. Invariably, the aircraft they were flying was a C-47. Cannibals, huge snakes, or lions and tigers always ate the people, who were lucky enough to survive the crash. I was smart enough, even at that young age, to say, “You will never catch my ass over a jungle in a C-47.” And now, just a mere fifteen years later, here I was in a C-47 over the most hostile jungle in the entire world. In addition to the lions and tigers, that were ready to eat me, there were people down there trying to shoot me down so they could. This was another one of those ironies of my Vietnam tour.”