Stuart Yates Yammers about the Wonders and Pitfalls of Publishing 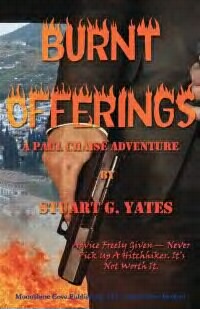 Stuart Yates. I’m sure many of you will be happy to meet him through my latest interview. Stuart is a prolific writer who has had many brushes with publishers contracts. We talk about the wonders, the pitfalls and getting those all important sales from the publishing world. All of this and we still managed to talk about his new book “Road Kill”, too! Enjoy!

Q) Hi, Stuart, great to meet you! Are you ready to begin?

Q) So, tell me about your beginning– your influences, for example, at the start of your writing career.

A) In those early days…I mean, we’re talking late 60s, early 70s… I would have to mention Deighton, James Mitchell, Ian Fleming. I love Diamonds are Forever, and still rate Casino Royale as one of the great spy thrillers of all time. My preferences change all the time. Right now, I’d have to say Robert B. Parker and Elmore Leonard. They have a very sparse style that allows you to effortlessly enter their world. I like that.

Q) Who would you say was your single biggest influence?

A) Whoah… influence is a hard one to answer because I don’t consciously try to write because of anybody really. All I ever knew was that I wanted to write. I know everyone says you should read to learn. I suppose I have…but not sure who my biggest influence is at all. My favourite author writes nothing like me– Thomas Hardy– but he’s a genius. Not sure if the other people I’ve mentioned are really “geniuses”.

Q) I’m sure you were disappointed by the original incarnation of Casino Royale?

A) The David Niven thing? Awful.

A) Hang on, let me think– no! Some do, but it is not a given. Producers like to play around with the plot, don’t they? And what works on paper doesn’t always come out well in film. There are exceptions, of course! David Lean’s Oliver Twist is a masterpiece.

Q) Can you see your own books as movies?

A) YES!!! Wow, I would so love that! The Pawnbroker (that’s a Glenn Stuart YA book) would make a good film; and recently BURNT OFFERINGS would transmit well to the screen or the TV. I could see the BBC doing that!

Q) You’ve written a large number of books, am I correct?

A) Written or had published?

A) Yes, I guess I am. I have not self-published. That was not something I ever thought of, to be honest. I’ve written over 20 books now, with 14 published. Next year, I should have at least 4 published, if not more. Actually, make that 30. I’ve just recounted. Over 30 written, some I’m rewriting, or finishing.

Q) If a reader had time to read just one, which would it be?

A) The problem with that is that if I could I would rewrite them all! That’s one of my biggest problems. I’m never satisfied. I always think I can do better. I suppose– whoa, I don’t know– stuck for choice if you are into YA (Young Adult), then The Pawnbroker. However, if you like grown up stuff, Burnt Offerings. Turns out, they are same as my film choices strangely enough, although I do love my very first published work Cold Hell in Darley Dene. Believe it or not, I cried at the end of that. It’s very personal to me.

Q) Yet, from recent postings on your blog, you tell of an almost non-existent sales record for your work. Why do you think that is? Your work gets picked up by publishers often. Are you perhaps more of a writer’s writer than a commercial writer?

A) I write what I’d like to term ‘entertainment’. I’m not literary nor, hopefully, pretentious. I just try and write good stories. I don’t know why my sales are low. Everyone who has read them likes them, so I think it must be the marketing. I don’t know. Maybe I don’t sell myself very well? I guess that could be a problem.

Q) Do publishers in your experience fail to push your work, perhaps?

A) Yes, every one of them. My latest publisher has been the best so far, but most just sit back and do nothing. I have signed a deal with a good publisher for a historical novel I’ve written, and they seem very proactive so far! Fingers crossed. That’s why I’m still totally convinced that the only way to make anything out of this business is to be signed by a big publisher like Harper Collins. Everyone will tell you differently and we all know the stories about self-published successes (like 50 Shades of whatever hue it is) but the reality is you can’t get noticed unless you can market your work. To do that effectively costs money.

Q) So, when you were first signed by a publisher, what did you expect from them?

A) Wow!!! GREAT things! But he was a crook. Stole my work, put his own name on it– it was awful. When I got Darley Dene published I was full of hope! I sold a few… but I soon came down to earth. However, I said to myself very early on that nothing was going to stop me from writing to the best of my ability.

Q) Have you had experience of editors who ruin work rather than add to it?

A) It still depresses me actually. I think ‘ruin’ is perhaps too strong, but I had one editor who seemed to think he knew more about my story than I did. He wanted changes and I should have resisted. I was still learning at that point. When the contract expires, I’ll put it back to how it should be. That’s something I have to make right.

Q) Which book was that?

A) Oooh, can’t tell you that! I’ll let you know when I get it re-published! Safe to say it’s nothing with STUART G YATES on the cover.

Q) A lot of my readers are self published and would love to have a contract with a publishing house. Would you warn them against it?

A) No! Getting a contract with a publishing house is great. All I would suggest is if it’s a small, so-called independent, check them out first. POL ANDERSON’S site is brilliant, so is PREDATORS AND EDITORS, but also RALAN and AUTHOR BEWARE. I would also check them out on Amazon– look at their sales, etc. Look at their web sites, too. Any publisher that spends time creating a good site is likely to take care of you.

Q) Would it be okay with you if young or newbie writers came to you for advice?

A) Absolutely. I submitted my first book in 1979 in the days of tippex and carbon paper. I have learned a lot since then– mostly about life, but also how to create stories. Anything I can do to help, I will.

Q) I’m sure a lot of people would appreciate it. I think it’s important that writers help each other out. Would you agree?

A) Yes, no doubt about that.

Q) You know, I’ve interviewed a lot of people and I have to say, you are one of the friendliest people I’ve met. Just sucking up a bit, you know!

Q) So, moving on– do you read a lot of self published books?

A) No. I’ve tried– but, no. Sorry. I hate sounding negative.

Q) Would you say many are badly written? Boring? Is ‘self published’ a stamp for unwanted books?

A) I think that perception is changing, but unfortunately, now as it is so easy, a lot of them have not been properly edited for grammar, simple spelling mistakes, etc. Some, well, simply don’t read well. If you do self publish, you have to take the time to get the book right. As Anne Fine said, ‘IT’S WORK’ and it is. There’s no substituting critical editing. Unfortunately, that doesn’t always happen.

Q) I agree. So, would you say writing is a full time occupation?

A) Wow, I would so LOVE IT to be. But, yes, it is because even when I’m at my day-job, I’m thinking of writing. I often go into work with a few pages printed out, so I can go through them during my lunch break. You have to immerse yourself in the world you’ve created. You have to constantly say, ‘COULD THAT BE BETTER?’ You need to be hard on yourself, force yourself to cross out those bad bits, add good, turn it around and…throw it away and start again. I said I have written over 30 books. I’ve published 14. So where are the others? They simply are not good enough. To write, you have to know what is good and what is not. That means a full-time commitment.

Q) Would it be true to say that you have to learn your ‘trade’ as a writer?

Q) Would you say that your books can show the progression of one writer through his life?

A) I think they can show a writer getting better at what he does. As I write my latest book ROAD KILL, I am conscious of it being better than anything else.

A) I used to live and work on Bodmin Moor in Cornwall. There were often stories about the Moor– most famously Jamaica Inn, but also legends of THE BEAST. I thought it was all something of a myth– a huge cat taking sheep.

A) Yes, a cat, a wild cat, set free. There were reports in the papers. Somebody had taken a photograph but it could have been anything– a little like the Loch Ness Monster I guess; but then, one night, me being me…it came to me, “What would happen if one night, I was driving home across the Moor, and the damned thing ran out in front of me? What if it was huge, black as night and I was absolutely terrified?” Well…so, I wrote ROAD KILL about a guy who lives out on the Moor and who takes Road Kill but then….ah ha….he is confronted by…..THE BEAST!!!! (dramatic chord) I wove in a sub-plot about a teacher (me!!!) and how he becomes involved and the story grew and grew. It is very grim and very violent.

Q) Let me stop you there! We need to save some material for our next interview! It’s been a joy interviewing you, Stuart!

So, there we have it, I have interviewed one of the most prolific writers I have ever met. I think he gave me some good advice. I hope he gave you some as well. Next week we will have more for you. Adios till then! 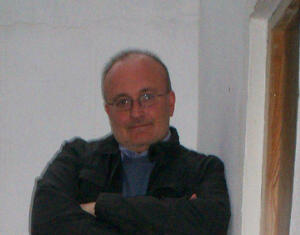