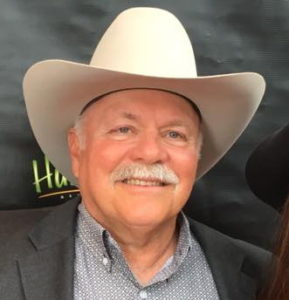 Have you ever wondered what it’s like to be a titan of the entertainment industry? I sure have. This interview is with Troy Andrews-Smith. A man who has acted, written songs, written books, produced motion pictures and lived among the Hollywood elite. He has been entertaining himself lately with a new kick. That kick is… Westerns. Let’s catch up with Troy and find out how much he is enjoying being a Western writer…

What made you want to become a writer in the first place?

I was thrown into it purely by accident and my big mouth. I’d always lipped off about how I was going to write a book someday but claimed I never had the time. Then I broke my back, had surgery, and suddenly I had the time and no excuses. That’s how Radersburg Gold came to be.

Have you written any other books that are not published? Do you have ideas lying around that you may work on one day?

All the books I have written so far have been published. It did take seventeen years to get the first one done, but hey, I’m persistent.  Yes, I have lots of ideas for books and movie scripts both.  Hope I live long enough to get them written.

What do you think about the e-book revolution?

I think e-books are great, but there are some drawbacks to them. Same with self-publishing.

How would you describe your writing style?

Not sure what to say here. I seem to write the way a story dictates. Like, in Radersburg Gold, I had no idea where the story was going. I just went where the characters took me. Whereas, in the screenplay A Town Too Small, I knew how it was going to end before I ever started writing. Guess I could put a whole ‘nother meaning to the term freelance.

I wrote the first draft of Radersburg Gold flat on my back, in a back brace, using Bic pens. This was after the surgery on my back. I’d write until the pen quit working then get a new one out of the jar I’d put next to my bed. I can’t say I recommend this method. Since then, personal computers came into prominence, and I do not plan on ever writing another anything any other way.

Do you write alone or in public?

I’ve done both but mostly alone.

Since moving from Montana where I lived at the end of the road a couple of miles away from my closest neighbor, I find I crave silence more and more. So, most days, the quieter the better, but some days I like to listen to Don Williams, Merle, Jim Reeves, Alison Krauss, or others. Problem with that is, I get excited about the music and have to go write another song. It’s a vicious cycle.

When you are in full writing mode, do you have goals of a certain number of words a week, or do you just write when inspiration strikes?

I don’t worry about the numbers of words per day. I just try to write something every day. Some days, I may write ten words; other days, twenty pages and have to force myself to stop and eat. It’s all about where the story is going on that day.

I’m a jumper. Outlines I use when I already have a good idea of the story, like if I’m doing a writer-for-hire job and the other person has already told me the basic idea of their story. On my own books and scripts, I write out of my head but make key-notes as I go along and think of something I don’t want to forget or leave out but it’s not going to be needed until later in the story.

What has your experience been like as an author?

I’ve wondered more about my sanity than I ever have before.

What have you put most of your effort into regarding writing?

Entertaining the reader. I love it when a totally unexpected person comes up and says they loved my book (poem, song). They don’t have to do that. I don’t even know they’ve read it. But, if I can entertain them for a while, I feel I’ve done a little bit of good in this life.

What is your new book about?

Murder! Maybe? is a murder mystery wrapped inside of a contemporary Western that I guarantee is different from any other book they’ve ever read. They don’t believe me? They can buy it, read it and then tell me what they think.

Why don’t you catch a copy of “Murder! Maybe” and discover the wonderful writings of Troy Andrews-Smith today! 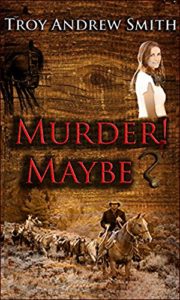