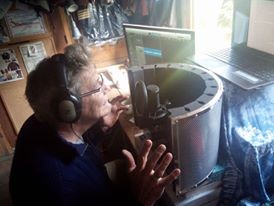 This new interview is with audiobook voice Paul Provo. Paul, who resides in Spain, has just completed working on the mammoth task of recording a train orientated audiobook for the Railroad Artifact Preservation Society in Amarillo. This brilliant new book will entertain all train enthusiasts from 1 to 101.

I love Westerns and have done several. Being Texan, I enjoy playing with the drawl and twang of cowboys as I imagine them jawing with one another out there in the hot desert, cussing and trying not to step on rattlesnakes while Indians are charging. You get me. Yep, Western audio books are doing very well. Something about the former Wild West and its lawlessness, mixed with pure dangerous living on the edge, generates interest for readers from all over the world.

The new Paul Provo project will be available on the market over the next few weeks. You can hear samples of Paul’s voice work by watching the video below.