This interview is something a little different. B.W. Hedgepeth is the descendant of one of the greatest bandits of the American West. The book is called “The Debonair Bandit,” and it’s hero is a man called Marion Hedgepeth. You can learn more about his ordeals here.

So, why did B.W. want to write a book about his famous ancestor? Well… who wouldn’t, and who better than B.W. to write the story. A story filled with action, love, deceit and honor… a book that will be hitting the marketplace fairly soon.

So, without wasting anymore yakking time… let’s head over and find out what B.W. has to say about Marion, writing and how he feels about writing a story ripped straight from the newsheets of the American West…

What is your latest flip? Can you give us a little insight into what you’ve been working on?

The Debonair Bandit. It really covers the spectrum of genres.  It’s a Western, adventure, romance, crime drama, and tragedy, but if I had to peg it into just one, it would be Western.

Who is your intended audience and why should they be interested in reading your book?

Anyone who loves and enjoys a historical drama that is laced with sprinkles of true life. Marion Hedgepeth was overlooked by the history books because he wasn’t a cruel and vicious killer, but he was one of the most colorful and daring outlaws of the West. I think readers will be entertained by his exploits.

With such an interesting story to tell– was it hard to come up with the title? You must have had a lot of choices?

That bit was easier than you’d think. Marion was also known as The Derby Kid, The Handsome Bandit, and The Montana Bandit, but the one title he was given, The Debonair Bandit, is the one that I thought best suited the novel. It was an absolute must.

It is definitely Marion. He went from an innocent fifteen-year-old Missouri farm boy to a daring outlaw in a way that anyone can relate to. It was tragedy and fate that created him, much like life itself creates us.

I don’t have any one character I dislike, but I really don’t care for the Pinkerton Detective Agency. Even though they are on the right side of the law, I don’t like their arrogance; then again, I’ve never liked authority. Guess I got those genes from the Hedgepeths.

Without giving away the ending of the book, I would change Marion’s outcome, but since it’s a historical drama, I really had no choice.

I researched Marion’s life for some time, reading news and magazine articles, after finding out he was a distant relative. I had no intentions of writing a book about him, but the more I discovered, the more I was compelled to do so. One interesting fact is that he shared a cell while he was in the Saint Louis, Missouri jail with Herman Webster Mudgett, better known under the name of Dr. Henry Howard Holmes, or more commonly just H.H. Holmes. Holmes was one of the first documented serial killers in the modern sense of the term. It was Marion who alerted the authorities, which resulted in Holmes’ capture and execution. Marion was also the first robber to use dynamite to blow a safe. His gang, “The Hedgepeth Four,” were the first gang to rob a train without stopping the train.

I love to fish. That’s my hobby. I tell people the reason I fish is because I can’t afford a psychiatrist. I also enjoy photography and cooking, provided I have someone to enjoy the meal with.

I can be found on Facebook under B.W. Hedgepeth, Outlawspublishing.com, Twitter, or you can email me via my publicist, Nick, at Nick@nickwale.org.

I am currently working on Scarecrow, another historical drama, but this time the lead character is fictional. He is an ex-slave, Civil War veteran who returns to the South seeking his family. Seeing the atrocities committed by the Ku Klux Clan, he takes on the persona of a scarecrow and conducts psychological and bloody warfare against his enemies.

Tell their friends! Regardless of how much marketing you do, it is the fans who make you a success.

If you are a reader, keep reading. In today’s society where people seek immediate gratification and want their entertainment handed to them, there is nothing like a good book in which to immerse yourself. Your imagination is far better than anything anyone can put on a screen. For you writers out there, keep writing. Don’t be discouraged by the word ‘no.’ J.K. Rowling of Harry Potter fame—her first rejection was just a slip of paper that read, “My list is full.” After over more than a dozen more rejections, she was finally published, and look at her success now.

Even though it was his suggestion, Marion couldn’t believe he was doing this. His heart was pounding, and his hands were sweaty. He was waiting in line at the Montana State Bank in Choteau like any other customer, with one big exception. He was not making a deposit, and the withdrawal he was about to make definitely wasn’t authorized. Bertie and Dink stood in the lobby, keeping watch. James was outside holding the horses. There was one more customer in front of Marion, and then it was his turn. The gentleman in front of him finished his transaction then Marion stepped forward.

“What can I do for you today, sir?” the teller asked.

George Crane had been a teller since the bank’s opening. He knew everyone in town, but this was a stranger to him. Marion sat his satchel on the counter.

“Fill up the bag with large bills, please,” Marion said.

“Excuse me?” Mr. Crane asked, thinking he had misheard Marion.

“Large bills, and please do it now, before it gets a little hectic in here,” Marion said, pulling back his long coat and drawing one of his revolvers. Slye and Dink followed his cue and drew their weapons. Dink guarded the door. Bertie covered the other customers.

“Everyone stay calm and no one gets hurt!” Bertie said

Mr. Crane looked at Marion, with eyes as big as an owl.

“Yes, this is a holdup,” Marion said

As he was putting the banded money into the bag, Marion felt a light tug on his suit jacket about waist level. He turned ever so slightly so he didn’t have to take his eyes off of Mr. Crane. Looking down, he saw the face of a little girl holding her mother’s hand who was standing directly behind him.

“You’re not gonna take my momma’s money are you, mister?” the little girl asked

Marion couldn’t help but smile. “No, missy, your mother’s money is completely safe, I promise.”
He looked at the little girl’s attractive mother and noticed something. She was wearing a diamond stick pin. “I do like that, though. Do you mind?” he asked her, pointing at it

“You want my stick pin?” she said

“Yes, please, unless it holds some sentimental value,” Marion replied

“Oh, heavens no. It doesn’t. My dead husband gave it to me, and he was a real bastard.” She removed the pin and started to hand it to Marion

“Now, would you place it on my cravat?

She did as she was asked, willingly

“Thank you, my beautiful lady. Now, sir, empty the other drawers, please,” Marion commanded of the teller politely, without missing a beat.

With the bag full, the teller slid it back to Marion.

“Thank you, sir. That will be all today,” Marion said. He took the bag and turned towards the door. Marion then tipped his hat to the lady with the little girl, gave her a wink and a crooked smile. She couldn’t help but smile back. Marion walked out with Bertie and Dink following. They quickly mounted their horses and took off.

You will be able to learn more about Marion Hedgepeth by reading the upcoming Outlaws Publishing release “The Debonair Bandit.” Watch this space for updates, further interviews and a few sneak peeks. You can also visit the official B.W. Hedgepeth website right here. 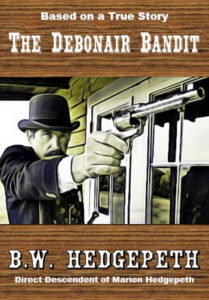