Finding the real Mike Walsh is one of those interesting projects that comes along only once in a while. Who is Mike Walsh? A soldier? A salesman? A loving father? In addition to all those, he’s a man who wrote about his son’s near-fatal brush with SIDS, and in retirement, decided to keep on writing and writing. Mike is friendly, approachable, and always has advice for those willing to listen. I guess sometimes finding the real man behind the book is simple– you just say, “Hi, Mike!” and you’ve found him… Mike Walsh is truly THAT down-to-earth. Read on to hear his wisdom…

Q) Mike, let me ask first, have you always wanted to be a writer?

A) Not really. Originally, I wanted to be an electrical engineer. When I was taking my English Composition course in college, I realized that I enjoyed writing. I didn’t really do anything with it until years later. There is an interesting story about that class if you want to hear it?

A) On the first day of class, the professor said that we should all write something and not put our names on it, turn it in, and by the end of the semester he would be able to tell who wrote what. I wrote a poem. At the end of the semester, when the grades were given out, he had to hand me back my poem saying, “This has to be yours. There is no one left. You are the first person to ever fool me with that exercise.”

Q) (Laughs) You were certainly something! So would you say writing and words were more important to you than the rock and roll boom taking over the world at that time?

A) The writing was something for me. The rock and roll was something that I needed to fit in, and as a teenager that was important.

Q) Do you think the rock and roll boom opened the door for creative free thought?

A) I think the messages did. There was always a message, a poem, an expression that triggered a response.

Q) The reason I ask is that I have interviewed a lot of ’50’s and ’60’s-era teenagers, and many have said that guys like Elvis and Rick Nelson influenced their writing. How does that fit in with your experience?

A) It was them and a few others for me– people like Roy Orbison and the Beach Boys.

Q) How about authors? Which authors influenced you at that early stage?

A) The only way to answer that is to explain the fact that our father was big on me and my three brothers all reading. He had me read all of the classics by the time I was fifteen. So, to have a single answer for that is difficult. As an example, he would have me read one of Shakespeare’s plays a week, and we would discuss it afterward.

Q) It sounds like literature was always something you were familiar with. So, you were part of the generation of Americans drafted into the Army. How did you feel about that?

A) At the time the draft was going on, I was in a technical school for electronics. My draft number was coming up and the only way I would be able to finish school was to enlist and go into the Army two days after graduation.

Q) Two days after graduation? That must have been a culture shock. How did you feel about going from a school environment to an army base in such a short time?

A) It’s hard to answer that. Culture shock doesn’t quite describe it. It did bother me, there was no question about that. At the same time, because of the things I had experienced before, I was almost ready for it. As an example, when I was thirteen, I witnessed two six-month old twins die of smoke inhalation and that had an emotional effect on me. A couple of years later, a good friend of mine was murdered. That also affected me.

Q) Would it be apt to say that, for you, the Army was a place to escape to?

Q) Once there, you didn’t enjoy being in the Army?

A) No. It didn’t take me long to realize that I was not destined to enjoy being treated like one of the herd. I like to think on my own.

A) It’s not what people would expect. Being shot at, no matter where you are, does not give you a good feeling. At the time I was there, 1969, there were mostly dirt roads, a few trees, and a lot of small villages all over the country with huts made of straw. I know that sounds strange, but it happened, and it was a real culture shock.

Q) To put things in context, you have gone from the U.S.A. and been taken to an alien country– what were your thoughts and feelings at the time? It must have been surreal!

A) It was. I told a story in one of my books about it. The book is Just Some Old Man. It was so different. The culture and the people were very interesting. I did learn a lot about the Korean people while I was there. 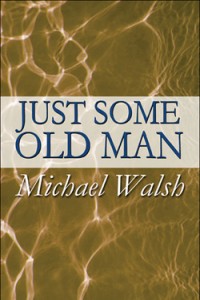 Q) Now that you’ve mentioned Just Some Old Man— let’s talk about your books, Mike. How did you get back into writing?

A) After our youngest son was born, we found out that he was a potential SIDS (Sudden Infant Death Syndrome) child. He would quit breathing for longer than thirty seconds for thirty percent of the time while he was sleeping. The emotions as a parent that came out of that started me writing again.

Q) That must be every parent’s worst nightmare. You wrote down all those emotions and feelings– how did the resulting book feel?

A) It felt good to write Kaeleb’s Dad. I didn’t complete until 25 years after. I wanted to make sure that he was going to make it. 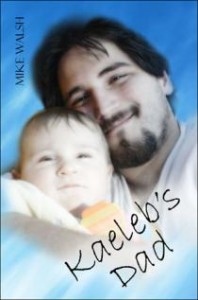 Q) Well, it’s great to hear that he did make it! Tell me, what is the writing process for you? Are you a night writer? A day writer? Do you like to write with music or without? What gets Mike Walsh into the groove?

A) Actually, I like to write with semi-classical music in the background. I am usually alone during the day and it makes a good time for me to write then.

Q) One of the things that drew me to you as a person was your obvious intelligence, Mike. You just came across to me as a really cultured and interesting guy. How would you stand with that analysis?

A) (Laughs) Thank you. My brothers would disagree, but I thank you.

Q) Well, it’s the truth as I see it! You’ve written a number of books– is it eight now?

A) I have finished eight and am working on my next one now. The first three were non-fiction books. Kaeleb’s Dad, was about our youngest son and his first nine months as a potential SIDS child. Eddie’s Method isabout my life as a teenager and how I managed to become who I am today, Just Some Old Man is about the four times in my life I experienced near-death experiences. The next five books have been fantasy books. The first two were Whetstone Chronicle and the follow up, Largo of the Whetstone Chronicle. The next three were a fantasy series, James of Elan, Gillbrath, and Key of Wands.

Q) Mike, now I have got to grill you– you are prolific. Do you find writing biography or fiction easier?

A) Grill away, Nick! Putting the emotions forward in a biographical work is hard. I really enjoy writing fiction more because I can just let my imagination go. While you are writing biographical subjects you experience the emotions over and over again until you finally get rid of them on paper.

Q) What would your advice be to a young writer starting a biographical or fiction work?

A) The old saying, “write what you know,” is the best advice I can give. Don’t be afraid to be yourself.

Q) That’s great advice.  I guess one of the burning questions I get requested to ask writers is a simple one. I will make it more personal in this case. Do you write for money or for person fulfillment?

A) I like it when someone reads my books and enjoys them. So I guess literary fulfillment. One of my brothers once told me if someone starts to read one of my books they will enjoy it. So far, that statement has held true. I like that.

Q) What are your thoughts on promotion? Are you a great believer in promoting your work?

A) I do. Just don’t ask me if I do well at it. I think the best promotion is word-of-mouth. I do try to use the social networks for promotion. In fact, a friend of mine, Angela Harris, has just started an online book club in which I am taking part, that will allow the readers to discuss the books with the authors. I think that an interview with credible people is important. The right questions allow the reader to get to know the author.

Q) I agree. I think a writer with personality can sell so many books, but the reader has to see the personality so the writer isn’t just a name on the front of a book anymore.

A) And that makes a big difference to the reader. If it is an author they can associate with, they will buy their books.

Q) Well, Mike, I will let you get back to your writing! Thanks for your time!

A) Not a problem, Nick! It was great spending time with you.

Mike Walsh answered my questions and went straight back to his writing. I think with every new book, more and more people find the “Walsh” magic. His sales have been steadily rising for years. If you haven’t already discovered Mike, now’s your chance! You can find him on Facebook.