Paul W. Meier is a guy I recently started to get to know well. We had our last interview scheduled for today and I wanted this one to really show the faith and beliefs of a man I have immense respect for. I wanted to know what he really thought about the religion he  writes about. I wanted to know what he really believes. What I found was not a surprise. Paul is a forward thinking guy with very practical beliefs. He believes in life, love and living. He believes in the word of Jesus, but believes that he himself can help the world, too. I think his opinions are noble and, through his work, he is achieving his goal… 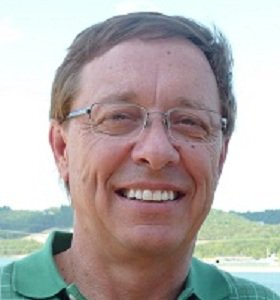 Q) What is the most important aspect of being a minister to you? What do you really need to be a minister?
A) In two words: know yourself…improve yourself…love yourself. I guess that’s six words. I’m still working on that. You’ll do a lot better at helping others when you take the most time to work on removing the log from your own eye.

Q) I guess it is a learning curve to be a minister. You are faced with new problems everyday. Would you agree with that?

A) It’s a learning curve to be human. I think I’m finally (at 62) learning how to live life to the fullest by trying to live in the moment, to appreciate what I have, and do the best job I can with what comes my way. Of course, that still requires gaining new knowledge and recognizing there’s a lot to learn.

Q) If you were talking directly to a young man or woman about your profession, what advice would you give?

A) Become a minister if you can’t not become one. I hope those who feel called into the ministry today will do so because they want to change the church rather than to join the church of antiquity.

Q) You mentioned ‘change’ there. Do you believe that change is a good thing for the church?

A) Anything that doesn’t change, dies. The church is dying because it thinks it has to believe the same things as were taught since the fourth century. That’s not faithful – that’s dumb. I can look at sermons I preached when I got started ten years ago and think, “I’d never preach that again.” My concept of God has changed in ten years. And we’re supposed to go by the concept people had of God in the fourth century?

Q) That, I would say, is a very strong point of view. Do you believe the church has become irrelevant then? Has it become outdated?

A) It’s relevant – and a blessing – to those who grew up in the church of the 20th century, but that’s what they were taught. It’s pretty hard to give up what you’ve thought would get you to heaven for six or seven decades. I guess that also means you have to become a new person – and that’s hard for people to do – change.

As for the church of today, we need new and creative thinkers in the church who can point to a better way of being Christ in the world, not to only worshiping Christ in a building on Sunday mornings.

Q) Would you say that the theory of God being “everywhere” and not just in church on a Sunday morning is valid? You don’t have to go to church to pray?

A) My opinion is that God is everywhere, including within you and within me. That means how I treat you is the same is my treatment of God. “I was hungry and you fed me.” The value of going to church is to gather together with others who are trying to improve themselves and the world by learning that God is within each of us. The Sunday church thing is a great practice so we are encouraged to be all we can become, to support each other, and to be reminded that we are blessed to be a blessing to others.

We are also to counteract the worldly way of thinking that says it’s okay to repay evil with evil – the eye for an eye thing. That’s why I wrote my newest e-book and released it last week – Be the Light: Overcoming Evil with Good. 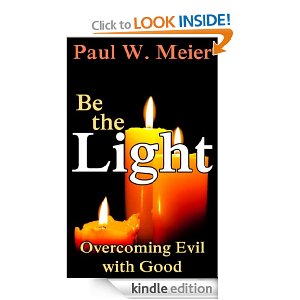 Q) You have a new book out this week? Tell me more about Be the Light: Overcoming Evil with Good?

A) It’s a response to the tragedy in Newtown, Connecticut in December when twenty children and six adult staff members were killed in an elementary school. A popular news correspondent tweeted that people should think about doing 26 random acts of kindness in honor of the innocent victims. It was a wise and compassionate suggestion. I found quotations from many of the world religions that said, “Repay evil with good.” The wisdom has been around for thousands of years, but few people follow it. My e-book lists the quotations, suggests why it works, and then gives 84 suggestions for doing acts of kindness. It’s free on KOBO, and since Amazon and Barnes & Noble require a price, it’s 99 cents (until they discover it free on KOBO and I hope they will price match it). All profits will be given as scholarships to financially challenged families of preschoolers in my community.

We won’t change the world until we change the way we teach our children to respond to evil.

Q) Does your community have a lot of financial challenged families? Is that a prevalent problem in your area?

A) Yes, it’s amazing to hear that over 60% of children in our elementary schools are on some kind of low-income subsidies that help pay for school lunches. I’m speaking only of the county in which I live, not statewide.

Q) That is a shocking statistic. How does that make you feel?

A) Like a very small fish in a very big ocean…so much need and so much to do. Yet, I know I can’t fix it all. However, maybe I can encourage a few more people to help.

Q) What is considered “poor” in your town? Lack of food? Health insurance?

A) That’s a good question, Nick. Poverty is more than financial. It starts with lack of self-esteem or self-respect. We learn to think less of ourselves as children, and the church doesn’t help us when it teaches that we are “poor, miserable sinners.” But to answer your question more directly, the poor in my county aren’t as financially depleted as they are health depleted. Many receive disability payments for having been injured while working (but I have to say that many have abused that part of the system). The truly poor get a meager amount from the state plus food stamps that can’t be used for tobacco or alcohol. In the overall scheme of things, our poor still receive more than most of the poor in third world countries.

Q) In England we have a social state– free healthcare, disability payments, free cars for the disabled, carers. Do you think a system like that would benefit America?

A) Yes, but too many capitalists are afraid of a government-run social service system. They are afraid someone will take more of their money and they’re afraid of not being able to get preferential treatment because they have money. They don’t trust government-run services because too many have been abused (usually by capitalists trying to make more money)! It’s a self-perpetuating cycle, just like repaying evil with evil.

Q) Do you think greed is one of the biggest problems in modern America?

A) Greed comes from a scarcity mindset– the glass is always half empty rather than half full. I think the real definition of lust is wanting more than you need. And the biggest problem for Americans is not being able to live in the moment. Tomorrow always looks better than today. Yesterday was always better than today. People don’t know how to live in today. So they can’t see the abundance all around them. That’s the theme of my next book in the In Living Color series – it’s called In Living Color: Heaven.

Q) You are a really forward thinking guy. Many believe ministers are conservative with staid thoughts. You strike me as a guy in the moment who wants to make change– do you find opposition to your opinions?

A) Yes. My first book in the series was on the Lord’s Prayer. My goal was to help expand the beauty and meaning of the prayer for people. Four people gave it a one star rating on Amazon because it wasn’t the traditional approach that affirmed God as a male humanoid figure that we should think of as our “father.” All I did was quote another author’s translation that he took from the Aramaic word for “father” and made it more abstract…”thou from whom the breath of life comes.” They called it “new age.” They couldn’t even think of God as more than a human in the sky sitting on a throne, holding a hammer and switches to a trapdoor that opens into heaven or hell.

Yet, Jesus spoke in Aramaic. Even the Greek word for father means “one who originates life.” In the first century, only the male seed was given credit for bringing forth life. The female was merely an incubator.

Q) People trashed your work for having a wider opinion of our creator? I’m sure many more welcomed your thoughts though, right?

A) Yes, I received many good comments with 4 and 5 star ratings.

Q) How have your fellow ministers taken to your work?

A) Ministers are a breed of their own. They like to impart knowledge but they don’t often like to read it from people they drink coffee with – kind of like the “prophet in his own country” attitude. One day, when someone “important” notices and makes a comment, they might give it a look. I’ve only had my work out there less than a year. I can’t get impatient.

Q) What do you think of guys like Joel Osteen who are preaching a new message to a huge audience?

A) Joel Osteen has helped more people to seek and find abundance in life than most who criticize him for not preaching old time religion and theology. They come to listen to him and turn on their television sets to watch because he gives them a message that will help them improve their life today. That’s why people were drawn to Jesus– because he helped them in life today– not because he promised them a better life when they were dead. What kind of sense does that make? You’ll be better off when you’re dead?

A) When people stop idolizing the theologies of yesterday and realize God gave them a brain to use for themselves, religion might become more relevant, and it may begin to attract people to itself because the church has become a sanctuary of peace, a beacon of hope, and a hospital for the wounded. Kind of like Jesus.