Brand New From Scott Harris: ‘When The Law Fails: Caz: Vigilante Hunter: Book One, Two, Three, Four, Five And Six’ Together For The First Time! 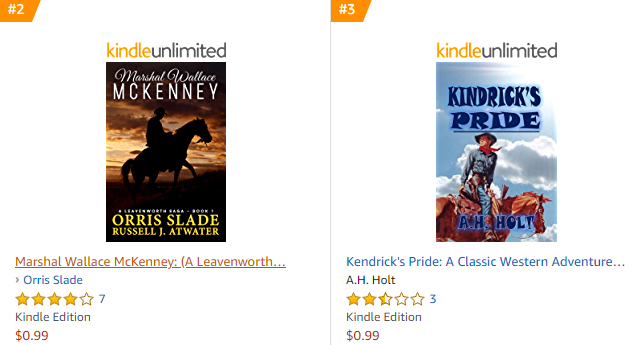 Sitting at number three we have “Kendrick’s Pride” from A.H. Holt. A.H. has been a longtime seller for Outlaws Publishing… and her new book has just continued the trend. This one was driven up the charts using a mixture of inter-author promotion techniques and pure advertising.

But what’s the book about?

A.H explains, “Kendrick is shocked when Hal Stinson’s brother demands custody of the twin boys he and Meg adopted almost eleven years ago. Meg is hysterical. Taken to court, Kendrick retains custody of the boys. Stinson makes threats and Meg is viciously murdered. Kendrick’s pride demands he join with Meg’s brother Jim to catch and punish the killers. On the way, they are joined by Davis, their friend.

In a mix-up created by the killers, Jim is captured and charged with his sister’s murder. The marshal is taking him back to Belden for trial. Kendrick is wounded is a gun battle and he and Davis find shelter with Reverend Armstrong and his daughter Elizabeth in an Indian settlement.

The town marshal leads a posse to capture Kendrick and Davis. Meg’s murderers join the posse. While fighting them off Armstrong reveals that the chief of the Indians in his congregation wants Elizabeth to be his wife. They decide to return to Belden for safety.

Back in Belden, Stinson tries to gain custody of the twins through the courts. He fails again. Then the twins are kidnapped.