Take Five of Seven: A Night At The Movies With Artist Judy Mastrangelo 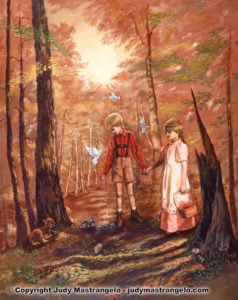 Besides being a film buff, I’m also an opera buff, and films of my favorite operas are a delight to me.  There are many to choose from, but there is a very special one I’d like to share with you:

HANSEL AND GRETEL: An Opera Fantasy –  This 1954 movie of the beautiful opera, with magnificent music by Engelbert Humperdinck, is a lovely childlike film with the characters done as stop motion animated figures.  These puppets were called “Kinemans,” and took many years to create so that they looked very lifelike, with wonderful movements and facial expressions.  It’s a real classic, like a fairy tale come to life.  This opera is one of my personal favorites.

There are quite a few movies about the life of Beethoven:

IMMORTAL BELOVED ~ 1994   The premise of this film is most likely a fictionalized theory that Beethoven’s nephew was his love child from an affair with his sister-in-law, but it is very enjoyable.  Gary Oldman is a great actor and portrays Beethoven’s spirit well.

BEETHOVEN’S NEPHEW – 1985  I think Wolfgang Reichmann portrays a very believable, eccentric and fiery Beethoven. This shows his stormy and troubled life, and sad relationship with his nephew.

AMMADEUS with F. Murray Abraham and Tom Hulce ~1984   This film was developed from the stage play by the same name.  It has some true details about Mozart’s life, but much of it is fictional.  For instance, fellow composer Antonio Salieri did not really poison Mozart, as implied in the film.  They were, in fact, friends in real life.  The sets and costumes are extremely beautiful, and I really enjoy experiencing the excerpts of Mozart’s operas depicted the way they were produced in his day.

COCO CHANNEL AND IGOR STRAVINSKY ~ 2009   This is a fascinating portrayal of Igor Stravinsky and his affair with Coco Chanel.  It shows the dramatic buildup to his performance of his ground-breaking composition, “THE RITE OF SPRING,” and the riot it caused at its opening night.

TV SERIES: The Life of Verdi ~ 1982, starring Ronald Pickup, narrated by Burt Lancaster.  This is a wonderful portrayal of Giuseppe Verdi’s life and music.

WAGNER – 1983, starring Richard Burton and Vanessa Redgrave. This is one of Burton’s last roles before his passing.  He doesn’t resemble Wagner, but he portrays his amazing spirit.  This film has great actors in it, and magnificent scenery and music of course. It was filmed in many original locations, such as King Ludwig’s castle in Bavaria ~ Neuschwanstein.  It is well worth viewing.

TOPSY TURVY  ~ 1999 is about the famous duo of operetta composers, W.S. Gilbert (librettist) and Sir Arthur Sullivan (music composer). I was raised on their music, since my parents loved it so much.  This film shows the relationship the two had together, and how they almost broke up their association.  But luckily for us, they reunited, and this fascinating and delightful film chronicles the making of one of their most popular operettas: “THE MIKADO.”   It’s a beautiful film, set in the lavish Victorian era.

These two films show the short life of Frederic Chopin, and his love relationship with female author George Sand:

SONG OF LOVE ~ 1947  This is a wonderful movie about the life of the talented but mentally disturbed  Schumann.   The composer Johannes Brahms was a friend, who fell deeply in love with Clara Schumann, the composer’s wife, a great concert pianist of her time.  Katharine Hepburn plays Clara.  I understand that Katharine practiced the piano diligently for the filming of this movie so that she could give a very believable feel to her piano playing.

SONG OF NORWAY – 1970    This is based loosely on the life of Edvard Grieg, the great Norwegian composer.  There is lovely scenery of Norway, and scenes of Tivoli, Italy when Grieg visits the great composer Franz Liszt there.  The movie contains some beautiful songs, sung to the music of Grieg, and wonderful dancing.