This interview is the first of a three part blog tour with Rachael L. McIntosh. Her new book, “Security Through Absurdity,” is currently available on Amazon, and there’s no book more worthy of your Kindle. Read this interview and then try out the book… You will be not be able to put it down.

Rachael, let me ask you this. How do you conceive your plot ideas?

Have you written a book you love that you have not been able to get published?

No.  I’ve never tried to write before.  This SECURITY THROUGH ABSURDITY trilogy just came pouring out of me.  When I submitted it to the publishers, they told me that I’d have to do three things.  #1.  Break it down into a trilogy because I had submitted the equivalent of 4.8 novels.  # 2. Use a pen name.  #3 Take out a life insurance policy.  I have done everything but use a pen name.  My family and friends have heard my accounts of these things in real life from me so I thought, “What’s the point?  It’s listed as FICTION anyway.”

How long did it take you to publish your first book after you started trying?

About two years from sitting down at the keyboard to seeing the first book in the series for sale on Amazon.

What do you think makes your book “Security Through Absurdity” unique, and how does it fit into the everyday lives of readers?

The fact that the publishers and I couldn’t come up with what genre this book falls into other than FICTION should tip people off that it defies classification and is unique. Corporate Crime or even Political Thriller would sort of work, but it doesn’t really fit in with the pre-scripted story line of these genres. It’s really a fictionalized whistleblower thing.  But the characters don’t know they are whistleblowing, and it lacks the typically outraged, angry tone.  It’s up to the reader to grab onto some of the info being presented, so it doesn’t even fit that whistleblower genre, either.  It’s just FICTION.   James Perloff, author of non-fiction Shadows of Power, has said that it’s “Working Girl meets The Net, but the issues are too real world to ignore.”

I guess that’s how it fits into the everyday life of the reader because it is so real life.  It is the story of an everyday life where truth is stranger than fiction, and the character just adapts.  This adaptation contributes to her foibles.   It makes the reader say, “Gee I wouldn’t do that…would I?”

Deaths and near misses.  Working for a corporation that was diametrically opposed to my nature. Illness.  Falling in love.  Having children.  War.  And, of course, money.  Add that to my involvement in national politics, well, all of these things impacted my perception of the world and caused me to focus on things that I probably would not have bothered with years ago.

What should readers know about the world of politics? What really goes on?

The way I came into it was via a lot of feel good rally-like stuff.  But then slowly I got acclimatized to the fact that there were rules you had to learn, or at least be aware of, like Roberts Rules of Order. Tedious tasks had to be performed like collecting signatures and keeping track of government deadlines and paperwork and accounting, and therefore, minions were needed.  It soon became a lot like a “real” job.  With the same kind of “office politics” vibe but more political (imagine that!).   That back door deals are made and that people who you thought were on your same team are not.  And it becomes apparent that a lot of people enjoy politics for the power trip and confrontation aspect (think: Debate Team captain from a private school).  There is a lot of “I’m more important than you” and hierarchy; and it’s just silly, especially when you discover that both teams are ultimately working for the same interests.  That despite the gift wrapping of a political slogan being bantered like a battle cry, it all comes down to money,  and the ultimate monied interests don’t worry about what colors the teams are waving around. They really don’t.  They control both teams anyway.  An individual voting has very little consequence on what will ultimately happen.  I now look at voting as voluntarily participating in a market research study.

“Security Through Absurdity” has connections with 9/11. Can you explain what that connection is?

Chapters 12, 13, and 14 relay via my fiction pretty much exactly what was going on inside the office I worked at on 9/11.  I have taken these chapters and published them as a tiny booklet called 28 Pages, making reference to the 28 pages George W. Bush withheld from the”Joint Inquiry into Intelligence Community Activities Before and After the Terrorist Attacks of September 11, 2001.”

I hope people will read these three chapters from Security Through Absurdity, think about them, and feel free to pass the information on to someone else.   28 pages will be FREE on Amazon starting on 9/11/14.

Do you truly believe 9/11 changed America, and how did it change America?

Yes. USA PATRIOT ACT, the core of which was written by now Vice President Joe Biden, was crafted well before 9/11, right before the Oklahoma City bombing took place and was supported by the Reagan and Bush Administrations.

USA PATRIOT ACT got passed with the quickness after 9/11 and blew America and its civil liberties, as everyone had understood them, out of the water.

Then the Department of Homeland Security was created and that opened the door for the full-on militarization of the police, the TSA and their body checks at airports and bomb sniffing dogs on trains, “If you see something, say something” campaigns lifted right out of Orwell and history, and of course the NSA and their eavesdropping and obsessive data collection on citizens.   It’s been over a decade now, and the population seems to have reached a point where people think this is normal.  It’s not.

When you think of America pre-9/11, what comes to mind?

My dad flying really close to the World Trade Center with me and my sister in his Beechcraft Bonanza.  Going to the airport to see the jets and other cool planes.  You could just walk right up to the planes on the tarmac without much trouble.  That was back when people sort of trusted other people.  They really didn’t talk about politics or religion in polite company and CNN was really a new thing.  Bombing and hijacking occurred someplace else and would never happen here.  Everyone felt safe and, as a nation, fairly well off.

Well obviously the scene at the airport has changed.  The scene in general has changed to include a hypersensitivity to danger.  Yet currently, people seem to feed themselves with inputs of fear on a regular basis via video feeds from all over the world.  I mean, I have a friend who walks in the city with a Geiger counter on him.  People feel very OK with cameras on them at all times and of course people talk politics and religion like it’s going out of style now.  People are obviously scared as is evidenced in newly developed and articulated prejudices.  This, to me, is one of the saddest of developments of our post 9/11 America.

What will the next instalment of “Security Through Absurdity” be about? How will the story progress?

Book Two: Bubbles Will Pop is where everything bad happens to the character.  It starts off with this quote:

“For a seed to achieve its greatest expression, it must come completely undone. The shell cracks, its insides come out and everything changes. To someone who doesn’t understand growth, it would look like complete destruction.”

And that quote lets you know that there is a transformation occurring in the main character.  Even though some of those bad thing are absolutely based in my real life experience, this is where the story gets even more fictionalized, especially with the character of Ethan.  He’s out of his mind.  This is all in preparation for the dramatic conclusion of  Book Three: The Big Show, which is also based squarely on a lot of reality in the political arena. 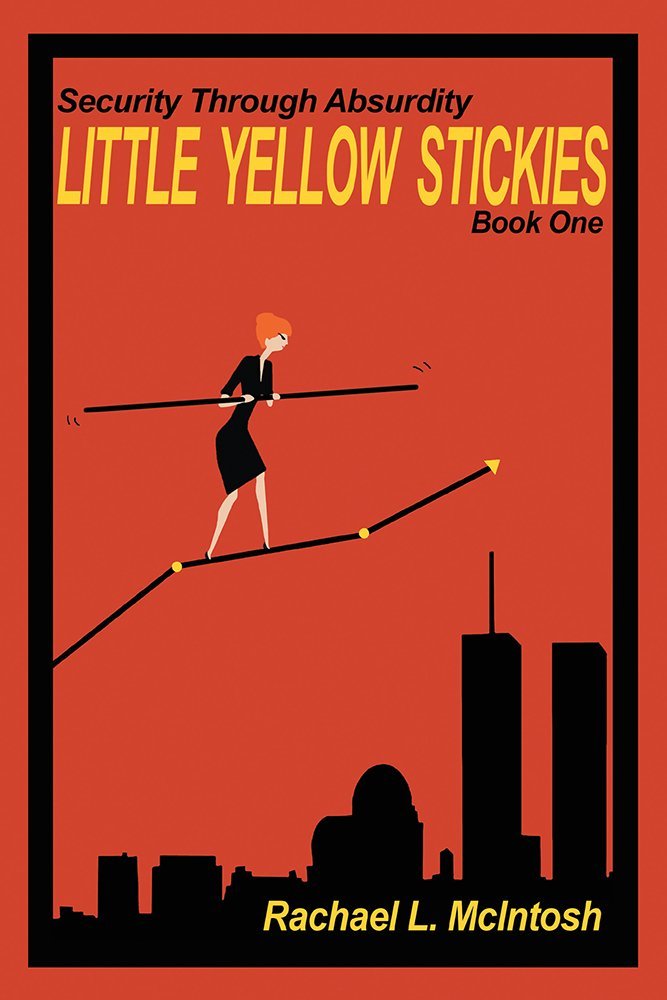 The Truth is Out There… Get Your Copy Today