It’s a Number One World: Randy Massey vs Cliff Roberts 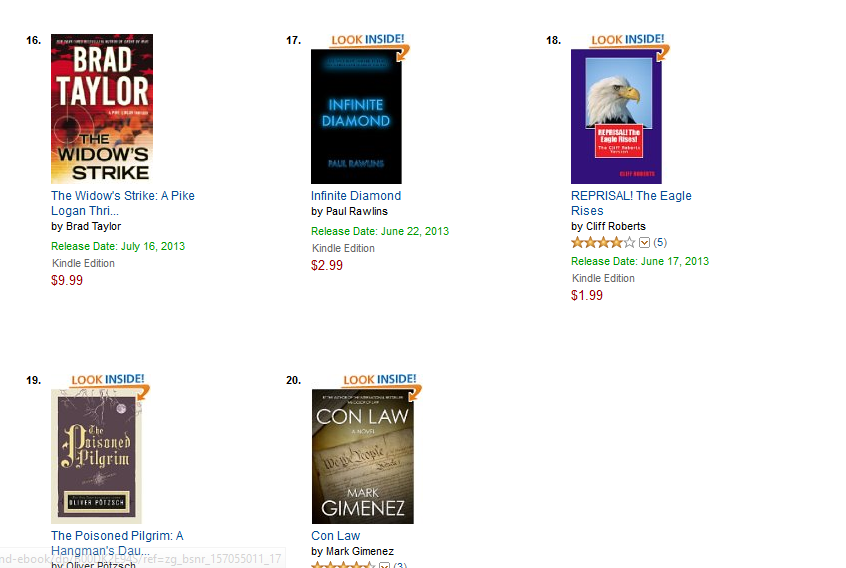 Roberts needs no introduction. His novel “Reprisal: The Eagle Rises” has been one of the fastest selling books of the year. In one week, he went from just another author to one of the bestselling authors of the year.

2013 will be known as the year of Cliff Roberts…

Randy Massey is another author who knows all about good fortune. His book “Summoner” has been at the top of the Goodreads lists for a long, long time. He puts his enduring popularity down to God, and I think he may just be right!

Randy: Good afternoon, Nick; and nice to meet you, Cliff!

Nick: Okay, Cliff. Let me ask you something. What, in your opinion, makes a bestseller?

Cliff: Nick, you need two things, I think. Number one, you have to write about a subject that people are interested in, and I mean lots of people. Secondly, you have to make sure the story draws a reaction from the reader. Ideally, it will cause the reader to experience a full range of emotions.

Nick: It’s all in the emotions the reader experiences?

Nick: Randy, how do you feel a bestseller is born?

Randy: My thoughts are that it must come from the heart, no matter what genre you write in. Speaking from the heart and with the passion for your topic filling the pages will in turn draw the readers into the story. For them to spread the word about your work they must feel as if they lived it, breathed it, even died in it.

Nick: Interesting. Cliff, when you first sit down to write, what’s going on in your mind?

Cliff: Let me just state that I really like Randy’s answer. He struck a hole-in-one. As to what I do with my own writing, I don’t do outlines or anything close it. I start with an idea, and I write down the general idea at the top of the page and then just start right in with the prologue. I tried starting with what I thought would be a pivotal point, but I found I write better if I write chronologically. I tend to let the story lead me where it wants to go.

Nick: Where do your ideas come from, Randy?

Randy: Life and all of its problems. Simple as that. For the genre I write in, YA Science Fantasy, people are looking for an escape. Unfortunately, too many turn to the wrong things. But the ones that don’t go in for the drugs and drink just fill the need by reading. So my story lines and ideas are generated by this need to escape from reality for a while, get lost in another world, another time, another place.

Nick: This leads me to an interesting question. Do you ever write to escape, Cliff?

Cliff: All the time. I suffer from many health issues, and I have days where I’m fairly immobile. So I write about what I would like to be doing, or how I would be spending my day if I wasn’t stuck sitting on ice packs. With a book you can do anything, be anyone, and I often get lost in my characters as a way to escape my personal issues.

Nick: What does it mean to “escape,” Randy?

Randy: When life gets you down, and it will, or circumstances seem to be overwhelming and you have no control and don’t know where to go, the need for at least a temporary relief comes upon us. A need to forget our pains, our dilemmas, our bad relationships, our past, our present, even our future if we see or have no hope of who we are, where we are going, or even how we might get there. Daily pressures are on all of us, no matter how rich or poor, how secure or insecure, or great or weak we are in our relationships with others. A great book, a good movie, or an extended vacation, are just a few examples of what we do to escape our struggles in life.

Nick: So, Cliff, what are you currently working on?

Cliff: I have a couple of new stories, but in the immediate future, I’m preparing to release the second book in the Reprisal! series titled, “Reprisal! The Gauntlet.” I hope to have it out shortly. However, most importantly, I have a new book on the way. My agent found a story online about a time-traveller. I want to write about time travel… So, I will.

Nick: The first Reprisal book sold many thousands of units, just recently. In your opinion, will the second “Reprisal” book be a blockbuster like the first?

Cliff:  I truly have to say that I think so. It takes the Kilauea team across the globe to Israel and into the West Bank in search of the money man behind the the terror attacks. Funny story here actually. The other night I was on Skype with an editor I just hired, and my phone started ringing. It was getting quite late, but I answered. To my dismay, it was a gentleman who had found my number to ask when the next “Reprisal” book would be released. His wife had ordered him to go through the phone book until he found my number. Wild man!

Nick: What did you say to him?

Cliff: I told him that he had reached Cliff Roberts and that I would send him a copy of the book for free. I also had to tell him that the story has lots of intrigue and plenty of action.

Nick: It just shows how wild things have become for you, Cliff! Randy, what’s next from you?

Randy: I now have been blessed with a publisher who has given me a contract for four book. The first will be a rewrite of my very first book “Summoner.” That is on schedule to come out in late October, with book two set for December. I have just heard that the a new cover I commissioned has been designed and approved for the first book. It is starting to get exciting to say the least!

Randy: There are a lot of pros and cons, good and bad, in either route. But, yes, I have pretty much always wanted to have a publisher. There is something to be said about being recognized and taken seriously for my work, even though the feeling is hard to explain well! Floating on cloud nine would come close for me! It was quite the exhilarating moment when they approached me. My wife would tell you that I Iost some sleep for sure.

Nick: I have been hearing rumours that you have been inundated with publishing offers for your second “Reprisal” novel. Is there any truth to that?

Cliff: Sure, they want to get their hands on a “Reprisal” manuscript. However, let me explain that I’ve some bad interactions with publishers. So, I guess I am a little bit gun shy. They have the potential of getting my work more exposure than I’m able to get on my own, although you have made a huge difference in that area, Nick. Your PR is what pushed me over the edge into becoming a #1 bestseller on Kindle. I’d need to be sure the publisher is going to give me good PR and a reasonable royalty before I’ll sign. I don’t like the idea that too many of them just want to skim the profit of the top and run, leaving you to figure out how to get things moving beyond the initial bump. I guess I’m saying yeah I’m interested, but it has to be a good deal.

Nick: Thank you, Cliff. It was one helluva ride taking that book to number one. Let me ask you, Randy, what is “The Summoner” about?

Randy: It is really about a young woman coming of age, an ancient prophecy being fulfilled, a magical sword of destiny, a bunch of really bad guys, lots of strange creatures– both good and evil–her rescuing her family, finding love, a beautiful heroine that saves the world that they live in. All the right things! And that’s just the debut novel and the beginning!

Nick: You are, of course, writing these books for the YA audience. Are you trying to spread a message, Randy?

Randy:  Good question, and it could have many variable answers. Mainly my message would include, but not be limited to, some of the following thoughts: you can be far more than you ever dreamed of, but it takes determination, perseverance, and a relentless pursuit of your goals. Don’t rely only on yourself, for help often comes from others when you don’t expect it. Be willing to accept what you can’t change, but be empowered by your goals to change the things you can. Have a purpose that will drive you forward towards your destiny while always remembering all that you do does affect the lives of others around you. Do what is right, even if it means self-sacrifice. Have deep and true values that you live for and are willing to die for.

Pick up the latest Randy Massey release alongside the latest Cliff Roberts offering!