A Trilogy of Aviation: An Interview with Mike Trahan

When The Sins Of The Past Claim The Future, The Craving For More Can Turn Deadly…. Paranormal Romance From Megan Elizabeth 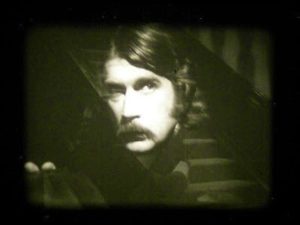 Many people know actor and author Alex Cord from his work in the Western field, or from his iconic role on TV’s Airwolf. But have you ever wondered what his darker side is like? Recently, I was contacted by Steve Carver, a very talented photographer, who wanted to work with Alex. To my surprise, he told me that he made a movie with Alex back in the 1970’s. Long story, cut short, this is the movie: “The Tell-Tale Heart,” and to go with it ,we have an exclusive interview with Steve Carver.

How did you happen to find yourself making a movie with Alex Cord? Did you know you’d be making a picture with him?

In March 1971, as a second-year directing fellow at the American Film Institute’s Center for Advanced Studies, I had completed a final draft of a screenplay based on Edgar Allen Poe’s classic horror tale, THE TELL-TALE HEART. With a budget of $10,000 for this second short film project, my hope was to produce, direct, photograph and edit a 35mm black & white, 30-minute movie that would be exhibited commercially in theaters and on educational television.

I sought casting recommendations from several Hollywood directors mentoring at the Institute, and the suggestion of Alex Cord came from Martin Ritt who had directed him in THE BROTHERHOOD a few years earlier. Alex fit nicely into the role of the man servant in the story.

What was the picture about—and why did it appeal to him?

THE TELL-TALE HEART was considered a classic of Gothic fiction genre, and one of Edgar Allen Poe’s most famous short stories of murder and revenge. The eerie tale follows Alex as a man servant, who narrates as he is gradually driven mad by his obsession with the repulsive, filmy “vulture eye” of the old man he cares for, played by Sam Jaffe. After murdering and dismembering the old man, the man servant hides the body under the floorboards. Ultimately, his guilt manifests itself in the hallucination that the man’s heart is still beating under the floorboards, and when police come to investigate, he offers a confession, convinced that they can also hear the heartbeat.

While there is an ambiguity and lack of details about the man servant’s character and plot, I think the appeal of the role to Alex was in the narration leading up to the murder. In the film, the narrator denies having any feelings of hatred or resentment for the old man who had, he says, never wronged him. He also denies that he kills for greed and endeavors to convince the audience of his sanity. In declaring that he is not mad, he instills in the audience the sense that he might indeed be mad and confirms it as the story proceeds. The specific motivation for murder that he commits becomes focused on the old man’s sinister, clouded eye, which represented some sort of veiled secret, or power. Alex developed this interpretation for his character.

As an inexperienced student filmmaker, it was less scary to direct a camera than to direct an actor. However, it was a privilege and pleasure to work with Alex. He arrived on the set fully prepared, full of energy and positivity. Although I had a vision for every shot in the film, Alex’s performance, his saturnine demeanor in front of the camera, far exceeded what I imagined in my preparation. He enjoyed rehearsing, which gave me opportunities to connect to him, improving the overall film quality dramatically.

Alex and Sam Jaffe worked well together and made me feel at ease and confident. Our relationships off camera added more depth to the acting, and as a result, created a positive atmosphere on the set. It was clear that Alex and Sam connected better to their characters because they were doing what they loved.

What are your favorite memories of the shoot?

The entire production of THE TELL-TALE HEART was a great, memorable experience. It was my second theatrical short film and a real labor of love. We were a very tight-knit group of filmmakers, partly students from the Institute, on a mission, no drama, committed to getting the filming right. Everyone was focused and driven since we had only ten, eight-hour days to film the script, so we really had to make the most of it. The entire film was shot in a large home in an exclusive residential area in Hancock Park belonging to James W. Fifield, a prominent doctor in the community.

A solid cast with Alex, Sam, Ed Binns, Dennis Cross and Dan Desmond made every day magical. The wardrobe, props, dressing, and equipment was on loan from Universal Studios, Warner Brothers, and Mole Richardson. Famed animal trainer, Frank Inn, participated with a black cat that was a spooky cutaway. The film also has an excellent, original and appropriate musical score by the brilliant Elmer Bernstein.

Another memory, although not particularly my favorite, concerns an incident that nearly took Alex and the other actors off the production. It began with a “Confidential” letter that I received from George Stevens, Jr., the AFI Director. In part, it said, “I was dismayed to see the item which appeared in the gossip column of Daily Variety. It served no purpose and was a disservice to the Film Institute. It has generated disquiet over our purposes here and unbalanced out relationship with the Screen Actors Guild which was based on a careful understanding.”

Shaken and angry, I wrote back to George and explained that a zealous crew member had called the gossip columnist without my knowledge or approval and related some erroneous information regarding the actors’ compensation. Because the incident greatly jeopardized the production, I immediately contacted an SAG executive to discuss the informal agreement and satisfy the problem. Fortunately, SAG and the cast were very understanding and cooperative, and the production continued the following day.

The incident caused a great deal of embarrassment and damage to my relationship with the Institute. However, a few days later George received a letter from Dr. James W. Fifield which said, “A group from your institution has leased a property from our family. I wish you to know how proud you can be of them – each and all.” He went on to praise our activities in making the film and mentioned his future support of AFI’s program.

Later that day, I received a personal note from George. It read, “Dear Steve: You have made a speedy recovery. The attached note to me from Dr. Fifield was nice to read. George.” 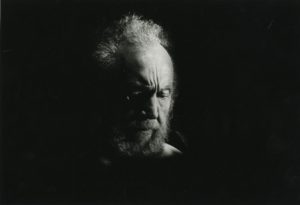 How was the movie received?

THE TELL-TALE HEART was shown in November 1971 with MARY QUEEN OF SCOTS in several popular theaters in Los Angeles to qualify for consideration of an Academy nomination. As a result, it was reviewed by numerous movie critics as “a good adaptation of the Poe story” because it did not rely on big budget techniques. Kevin Thomas of the Los Angeles Times wrote, “Carver has adapted the classic Edgar Allan Poe study in psychological suspense and terror with considerable skill. It is an effective mood piece, a beautiful work in ominous light and shadow.” Other film critics stated that it was arguably the best film version of the story ever done.

Most memorable compliments that I received were from my mentors at The American Film Institute, George Stevens, George Seaton, Charlton Heston, and Gregory Peck. I will never forget their kind words.

In December of that year, the American Film Institute invited an audience of industry professionals to view a showcase of work by some of their student filmmakers. At the informal meet-and-greet reception afterward, I was approached by Roger Corman, who told me that he had directed film adaptations of Poe’s work and was impressed by my short film. Shortly after that meeting, I received a job offer at his new production company and went on to direct four feature films for him.

In 1972, THE TELL-TALE HEART won the Cine Golden Eagle Award and the Cork Film Festival Award in Ireland.

Can people see it still?

Yes, a copy of THE TELL-TALE HEART can be seen at the end of this interview. Also, there are several VHS tapes available for sale on eBay.

How do you feel about the movie now, looking back?

To this day, I am amazed by not only the movie that was made, but by the practicable knowledge I received at The American Film Institute that allowed me to go out and make the film. THE TELL-TALE HEART short film has had an immeasurable effect on my career in filmmaking. It gave me an invaluable opportunity to work with and learn from established actors like Alex and a keen sense of accomplishment and confidence.

Did you want to work with Alex again?

Yes, definitely. But the opportunity never materialized. Right now, I would like to photograph Alex for my photography book project described below.

What projects are you currently working on?

Seeking to refine my artistic vision, and motivated by a desire to take a break from directing, I have turned my attention to a different kind of creative challenge, hoping that it would provide a path toward deeper self-fulfillment. Motivated by a passion for black & white photography, I built a photographic studio and darkroom in Los Angeles to create exceptional images for exhibition, publication, and prestigious collections around the world, offering new interpretations of cultural heritages. I am currently creating a body of work that I consider to be among my highest artistic achievements.

Are you enjoying putting together a book of Western heroes?

Yes. The portraits that I am creating for UNSUNG HEROES & VILLAINS OF THE SILVER SCREEN are of some of Hollywood’s most respected and remembered character actors, many known from iconic Western movies. As celebratory chronicles, they capture the allure and mystique of the Westerner and the Old West, significantly incorporating the complexion of stylized 19th and early 20th century portraiture.

The volume will contain creative, rich and powerful visual representations with the camera searching into the nature of each actor, defining their diverse and auspicious personality, giving each portrait its special dimensions of inwardness and dignity. It will serve as a unique resource on the history of American cinema, and because of the interest generated from recent Westerns and classics playing on television, will attract readers all over the world and never become obsolete with a long life in print. 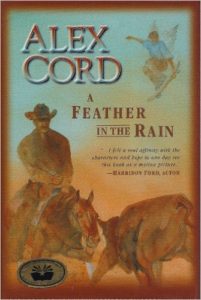 And don’t forget to check out the award-winning “A Feather in the Rain” by Alex Cord today! You can download your copy from Amazon here!