Roselyn Kachuck has been writing for many years. I ran into her through another writer– Sandra Carrington-Smith. Would Roselyn like to appear on my page? Would I like to interview her? Would I like to run extracts from her latest book?

SURE! What’s your book The Memory Lingers On about Roselyn?

It’s an emotional rollercoaster ride across time and within alternate realities that gives a unique perspective on Alzheimer’s as it follows Anna Metz Segal’s evolving spirit reliving over eighty years of life spanning the tumultuous 20th century. 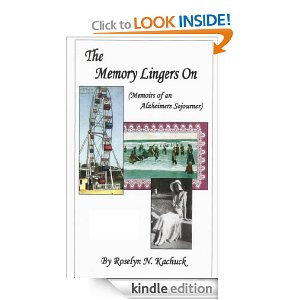 Sounds interesting to me! Let’s run it!

Okay, I’m looking forward to reading them. Shoot them over.

Here is the first from Alice Elliot Dark who wrote In the Gloaming and Think of England? You read that right?

Yes, I really enjoyed that one.

Me too! She wrote this:

I must tell you I loved it. (Kachuck) told Anna’s story with such sensitivity. I loved the scenes in her youth when she was a young girl and woman full of hopes and dreams; I think (Kachuck) really captured the uneven nature of a person’s personality at that age, how they are ahead of themselves in some areas and not in others. I was also fascinated by Anna’s memories of other lives and times. I’ve never seen anyone interpret the loss of present memory in that light. It’s brilliant and moving.

WOW! She wrote that?

Yes, and I also got a review from Robert Cohen who is editor for the St. Louis Jewish Light!

Seriously? Let me see that one.

Kachuck’s narrative of Anna’s heroic journey evokes some of the best of the various Latin American and Italian schools of “magic realism” by such writers as Gabriel Manuel Marquez and Italo Calvino. Anna’s world is both very “here and now,” even when she is experiencing her “visions” which are both realistic and as fantastic as the paintings of Marc Chagall.

Okay, Roselyn, I really want to read this book!

Anna is awake in 1951.  Her children are coming home from school with identification tags in preparation for the next war.  She’s afraid it will come.

Poppa, I forgive you as I forgive myself sins that I have committed. Now, after the execution of Julius and Ethel Rosenberg, I know you had no choice. It’s not that you were a coward, but that you believed you were. You didn’t sell out to the devil; you just wanted him off your back. No, this isn’t Russia. I pray to God we can make it more than just another piece of land, on another ocean, with a different name.
So much doesn’t make sense. I can’t believe that a bomb is good because the Russians are bad. I can only accept so much before I break. And when my children come home with dog tags, practicing to die while they cower under their desks, I breakdown, like my father before me. But I don’t know what I have to say or do to stop it from going on. As I think these conflicted thoughts, I fall into a restless sleep.
What I believe is the sound of Harry snoring becomes the whistling of the wind past my ears. Soon it is howling around me as I stand on the beach. Dark clouds are overhead; soon, rain will follow. Am I dreaming? Or have I wakened from a dream?
The wind has a voice; it answers, “Does it matter?”
“Yes!  It matters. I don’t know where I stand. If my life means anything, I need to know if it’s real or an illusion.”
The voice has gone. I look at the dark swirling clouds knowing I should try to find cover but the boardwalk is too far away and the wind holds me back, almost pushing me toward the sea.
I lift my arms to heaven imploring, “Is any of this real?”  In the clouds, faces appear. Faces of the dead I remember, faces from another lifetime, including my own reflection changing in the shifting light and flowing patterns of the clouds. My face changes but I do recognize myself before the memory was forgotten. I don’t know who I am, if I am any one of the faces or all of them.
“Is any of this real?” I call out.
“There are no answers,” my mother says.
I am surprised she is standing beside me. “Where did you come from?” I ask.
But she only repeats, “There are no answers.”
EXCLUSIVE EXCERPT #2
In the summer of 1996 Anna has been moved to a Nursing home.  She believes she’s at resort in the mountains.  From this location the spirits come to her & take her back in time. Her she is waiting for her husband.
*****
Dozing on and off as the day wore on, she wondered when Harry would come for her. It seemed like a long time ago that he went for something but she couldn’t remember what.
A man came out to empty the trash cans. For a moment, she thought he was Harry, so called to him. He waved in greeting as he lifted the plastic liner out of one can then loaded it into a bin he wheeled behind him. “Nice evening,” he said.
How could she have mistaken him for Harry? Just as her fears were coming to light, an attendant came by. “They’re having a sing-along inside, Mrs. Segal. Why don’t you come in?”
“I’m waiting for Harry,” she answered. “I’ll see what he wants to do.”
“Maybe he’s already inside,” the woman said. “You can meet him there.”
Anna laughed and, as she did, could see him so clearly that she knew the wait would not be much longer and that he expected she would be here. “No, I told him I’d wait. I don’t want to lose him.”
What did you think, Nick?
I loved it! Can we interview?
I think that can be arranged….
Stay tuned for a great interview coming up with the lovely Roselyn Kachuk!