A Sinner Am I- Johnnie Ray. 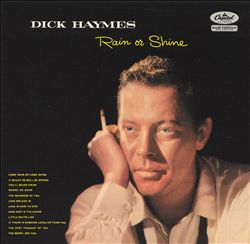 The time had come for Dick Haymes to make a bigger splash. Throughout the 1940’s he had matched Frank Sinatra in every single way. Hit records like ‘It Might as well be Spring’ and ‘Love Letters’ dominated those early charts. The movies had made him a household name and concert dates were bulging with fans.

Then, slowly it had slipped away. Haymes had married Rita Hayworth, he had conquered the music industry and the film industry, but by 1954 his career was in tatters.

Capitol gave him an olive branch- just as they had to Frank Sinatra, Haymes was signed up to make albums.

The first album did not have a hit single, it did not have a gimmick or any sales quirk. “Come Rain or Come Shine” was just a perfectly classy album by one of the worlds greatest voices.

What made it stand out? Emotive singing! I think a huge part of it was that he recorded the album shortly after his split with Rita Hayworth. The small, powerful arrangements and a hell of a lot of life experience added so much to the disc. From the first song to the last, the album was a classic. Now, I might be biased- but I liked that album so much I wore out a copy. I liked it as much as I liked ‘On Broadway’ by Robert Goulet and ‘Swing Easy’ by Frank Sinatra.

That 10″ Capitol album had a hold over me, and that hold stuck until I found the second album ‘Moondreams”.

The second album, another 10″ disc, was even better. The album hit hard in a powerfully subtle way, with its beautiful arrangements and lovelorn singing. It’s one of those late night albums that really groove you into the small hours.

So why isn’t Dick Haymes known better? Well, Capitol wanted a hit single. Dick couldn’t deliver, the songs he knew best were not rock and roll. The arrangements would not rock. The records he made were masterpiece albums, but without singles it was thought that an artist could not sustain popularity. How he must have looked with envy at Johnnie Ray and Frank Sinatra as their records raced up the bestsellers. Imagine if Dick Haymes had recorded ‘Cry’ or ‘Witchcraft’, he might well be remembered better today.

Alas, it wasn’t to be. Great singing isn’t a key to success, it just helps. Dick kept working the nightclubs and making the odd album. Finally he died in the 1980’s. If he had done nothing except those two albums above he would be still be a genius in my eyes- but with a back catalogue as strong as his was- he’s a legend. RIP Dick.