There’s a new wave riding over the mountains. A new wave of Western writers who have all the traditional values that readers admire and love—but they differ from the authors who came before. The concepts, the stories, the production—it’s all getting better every single day. But the key is that we are starting to see recognizable, bankable names popping up on the Western market. These are the men and women who have become ‘favorites’ of the Western readership. Paul L. Thompson, Scott Harris, Robert Hanlon, C. Wayne Winkle, Mike Mackessy, John Buzzard, Nerissa Stacey, and so on. The writers readers go to—and read the moment they lay their eyes on their books.

And all of this came from simple, straight-forward promotion. There were no billboards. No TV advertisements. No radio announcements. This all came from the serious, studied world of proven sales. The kind of sales you don’t hear about anymore. The old chestnut routine of placement, production, value and cost. Visibility, optimization, capitalization and plain old pop-up, in-your-face advertising. There’s no secret to any of this.

So what was it that caused Mackessy to score the number one position? Well… it’s a mixture of things. 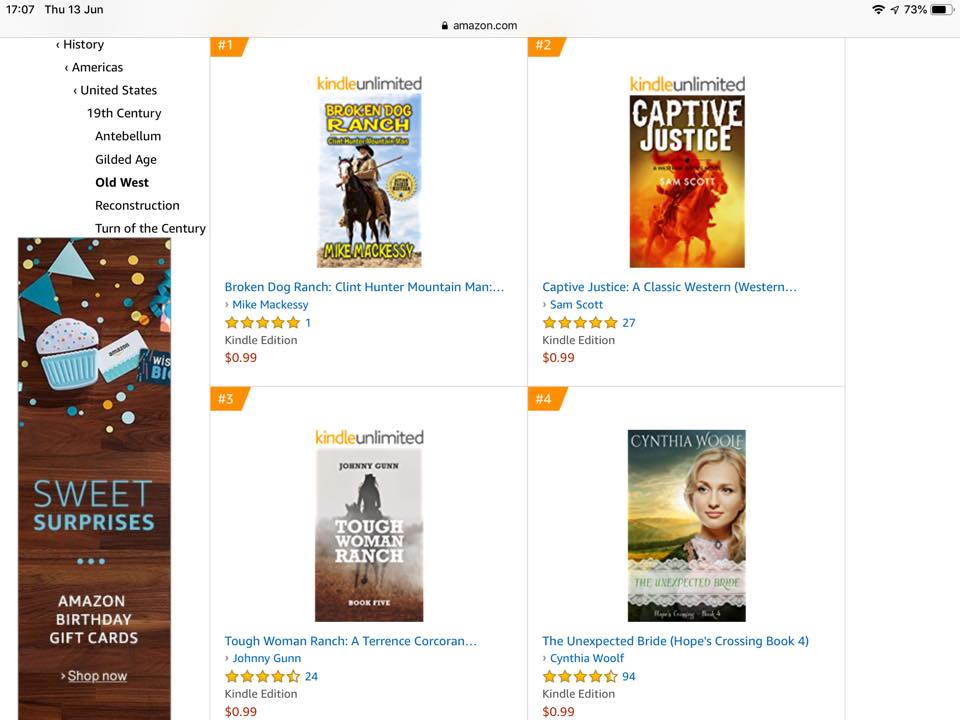 So there you have a marketing plan that allows for an author who was doing well to take the initiative and become a bestseller. The timing was crucial—the use of catalogue product (a box set) was absolutely necessary, as it pulled in new readers—readers who became the “street team” for the new novel.

Pundits who say that huge amounts of advertising are needed are wrong. What a good promoter of Westerns must have is the ability to see opportunity. All those big hits, and huge checks, are built on the back of opportunity.

Mike Hundley scored his number one with “Gunsight Justice” first in Australia. Then he found himself in the top ten Stateside. Gary Church had two books in the top twenty that had never gone past #10. By carefully timing his new release, he beat that record with his third book, “Good Man—Bad Enemy,” and took the number one position. Mike Mackessy was also a beautiful mix of things led by timing, and now he’s scored a number one bestseller.

Now—can you do something similar with your books? I reckon you can, and if you can’t, ask all the questions you want below. Always happy to meet new people. Don’t forget to go buy a few copies of “Broken Dog Ranch” too!