WIN A PART OF AVIATION HISTORY, GRACELAND, AND THE MEMORY OF THE KING!

In 1973 Delta pilot and professional photographer, Tom LeBoutillier, received permission to set up his equipment at the end of a runway at Houston Intercontinental Airport. Before taking his picture he had a discussion with Capt.  John Steiger. Steiger agreed that he would give him a show. At lift off Steiger sucked up the wheels of the Convair 880 and, instead of climbing, he leveled the airplane going straight for the camera. The airplane came so close that Tom snapped the picture and dived for the ground. The picture turned out to be one of the greatest shots in aviation history, the detail so clear that you can actually see the pilots in the cockpit.

The Convair 880 was the queen of the skies. On its first delivery to Delta Air Lines it set a transcontinental speed record. As Capt. Taylor says in his book, WHEELS UP,

“… The engines burned gas like a Maserati  and blew black smoke out of the noisy exhaust.”

The airplane in the picture became the last Convair 880 that Delta operated. The author flew this airplane on its last commercial flight. Some months later the airplane was sold to Elvis Presley. He spent three times the purchase price redoing the interior, including gold faucets in the bathroom. He named it  the Lisa Marie, and it sits at Graceland today.

The 20 x 30 print is unavailable in this size except by arrangement with the photographer. Framing not included in the prize. 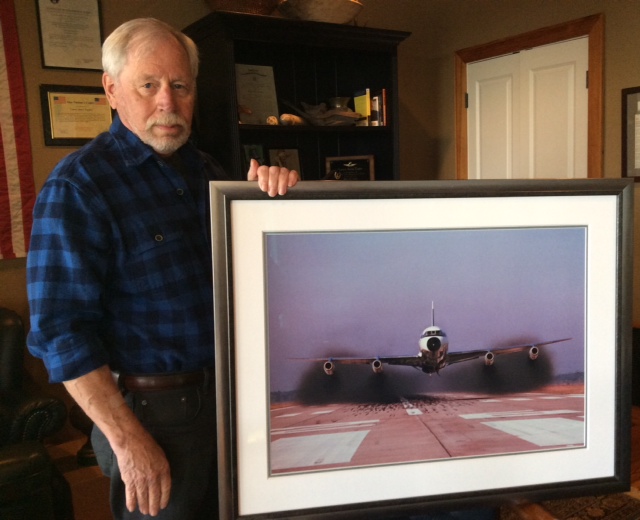 Author and retired Delta pilot Steve Taylor with the print of the Convair 880.

Enter the below competition to win your copy of this rare print and an important piece of aviation and Elvis Presley history!