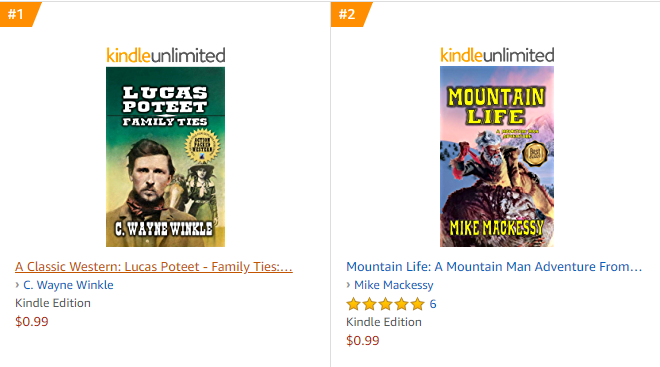 As predicted… C. Wayne Winkle has taken the number one spot with his latest Western “Lucas Poteet – Family Ties.” This one has all the hallmarks of being a long, long term Western success. C. Wayne has had several number one bestsellers. I’m sure he’s very excited to be at the top once again!

But… what is this one about?

On the ranch for about six months, Lucas faces hostility from the two hired hands and discovers a woman and her son living in a remote cabin on his property. Who were they? What were they doing in such an out-of-the-way place?
As he deals with this and the approaching winter, a young woman arrives in Santa Fe saying she’s the daughter of Ellis Conroy, Lucas’s cousin who tried to kill him and take the ranch. She begins making friends in Santa Fe and asking about the legality of the Spanish land grant that formed the basis of the ranch.

At the same time, Boone Jenkins escapes from a prison wagon and sets out with his gang to find the Deputy Sheriff who put him there. This puts the gang right on the trail to run across Lucas.

What follows is betrayal and gunfire. Click here to grab your copy of this number one bestseller!