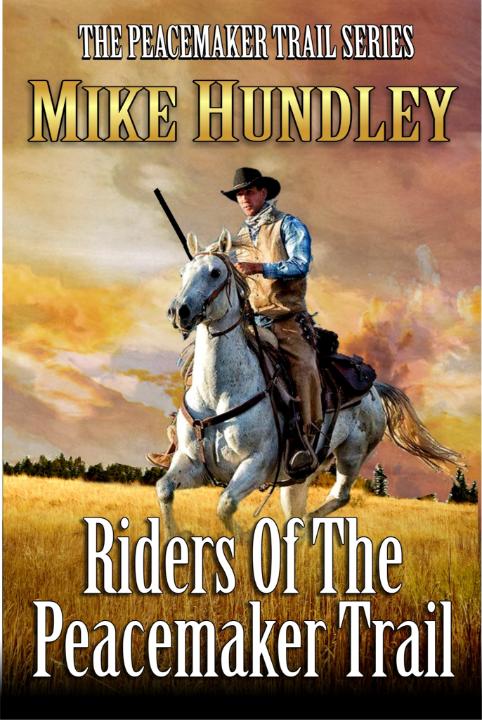 He’s back! This is Western writing superpower Mike Hundley with his latest, greatest, larger-than-life, cowboy-filled, goodness, gracious me… bestseller! This is “Riders of the Peacemaker Trail.”

The Western Your Kindle Has Been Asking For!

Colorado 1887, the Garrison boys, now young brave and honorable men, saddled their big horses and took up the trail south to Mexico. They had promised her to visit, that day as she rode off in a wagon, her murdered husband’s coffin riding beside her to his final resting place. That little Spanish mission was only six days ride. She had raised them and they had promised. A rider had summoned them. Madeira only had days to live. They loaded their Winchesters and Colts and set out onto a long and dangerous trail. They longed to see her and to say goodbye.

Shielding the new love in his life, Ransom becomes a match for every threat with his silver pistol. Fearing his little brother was becoming a gunfighter Gabe rides along taking risks to protect him and his new found love. The gate to death was opened wide and many rode through it on the Peacemaker Trail.

The trail of honor they had taken to pay final respects to the woman who had raised them, turned into a trail of challenges blood and death. Dead bodies paved the way back across the border in this wonderful tale of honor, love, revenge, death, happiness and sorrow. As with all books written by Mike Hundley, he keeps his promise in Riders of the Peacemaker trail that no bullet will be left unfired and no emotion will be left untouched. This is a full storied novel, in the style of old Western novels written by the masters of yesterday. Ride the Peacemaker Trail with Mike Hundley and see why his name is on the lips of readers of his very realistic Western stories.