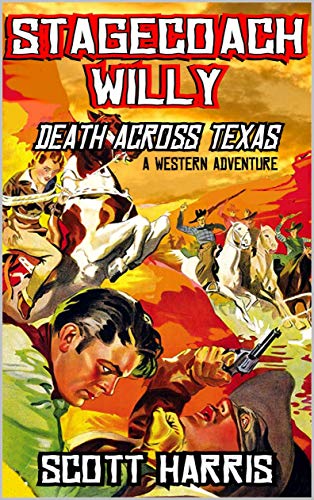 Stagecoach Willy and Ten are known respectively as the best stagecoach driver and shotgun messenger in the West, but they’re struggling to retire and enjoy life from somewhere other than a stagecoach front bench.

Willy is tracked down by an old boss, who’s also an old friend and runs a stagecoach business in Texas. His men have been hit—and hit hard—seven times in the past four months. One of those killed was the first stagecoach messenger Willy staged with, a man who took Willy under his wing and showed him how to get from point A to point B, on time and alive.

And now he’s been killed. Murdered. Willy prepares to leave immediately. Without question or hesitation, he is joined by his long time staging partner, Ten, and a beautiful, strong female Pinkerton agent, Kate Miller.

They leave for Texas, unsure of what they might find, but completely unprepared for what awaits them as they begin to roll across the vast landscape known at Texas.

Death Across Texas is the third book in the new Stagecoach Willy series, following the successful first book, 600 Bloody Miles, and the even more successful second book, Hunted, Wounded & Alone. All three are brought to you by Scott Harris, who is the creator and author of the tremendously successful Brock Clemons and Caz: Vigilante Hunter series.