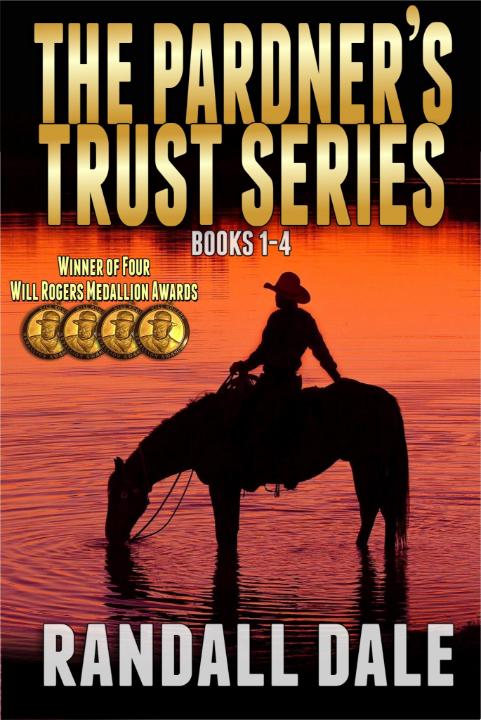 For the first time all four of the books in the “Pardner’s Trust” Western series are together—for your reading pleasure. Thrill to four award-winning Westerns from Randall Dale!

A good horse gone bad and a young, ambitious cowboy meet in an epic battle of wills in the dry and dusty southwest. Hard working and honest to the core Ricky Richardson, taught by one of the best, is injured in a freak horse accident that leaves him in the hospital and the horse dead. After six weeks of recovery and without work he is desperate for a job. An offer comes with a catch, he must show up with a horse to ride and the only horse in his price range is a mistrusting black with a history of having been mistreated. He is cheap for a reason as Ricky would soon learn. Both stubborn, one will have to give. Which one will it be?

Ricky Richardson, hard-working, honest to the core and cowboy all the way, is faced with the most severe test of his young life. His whole world comes crashing down as his beautiful wife Jessie is rushed to the hospital with a life threatening condition. As she lingers between life and death it is more than the young cowboy can bear. He needs to be there for his son and newborn daughter but the possibility of Jessie’s death weighs so heavily on his mind that he cannot function rationally. He shuts out his family and his friends, giving then every reason to abandon him in his deepest time of need. An emotional and heartwarming story of mistakes and redemption, of life and love and the pivotal role family and true friends play in all of our lives.

Karen hires Sammy, a down and out 18 year old to work at the nursery. When he is arrested for a crime she is sure he didn’t commit she must find a way to prove his innocence. Two men show up to help, one a detective and one a rich man but she wonders if they are more interested in her than in the boy. This book continues the saga of Ricky, Jessie, Karen and Flemming. Good guys, bad guys, horses and ranchers all the way through a stunning conclusion.

Eighteen year old Vicente Zermeno is being pulled deeper and deeper into the gang in East LA—his only future? An early grave. His frustrated parents have tried everything but nothing is working. Finally, in desperation they call a relative in a small town in New Mexico hoping that shipping the boy to the country will bring him to his senses, but his defiant attitude makes any chance of success almost impossible. A glimmer of hope arises only after an offer comes from Ricky Richardson to have the boy come to his ranch. West Texas ranch country with nothing but wide open spaces and miles of grassland in which to find himself may well be Vicente’s last opportunity.