Brand New Western Releases From Your Favorites: New Hits From Scott Harris, William H. Joiner, Jr and Many Others… 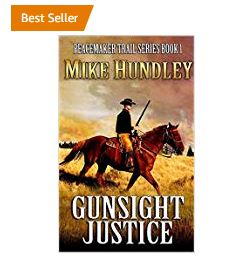 Sometimes talent comes along that doesn’t become a hit straight away. Take Mike Hundley, for example, a truly exciting writer who has written four Westerns we knew readers would enjoy. We just knew readers would go ga-ga for Hundley. He has this way of writing with a personal touch you don’t find too often. However, his first two books were released a couple of years ago and caught on… but then dropped off. Hot to cold in thirty days. Mike, not being a wilting wallflower, wrote another book—same thing happened—it caught on, went cold, and we all scratched our heads. The fourth book came out—caught on, went cold. Four books that some readers enjoyed, but most ignored.

What the heck happened?

Earlier this year we decided on an ambitious project—the reissue of all Hundley titles. A few changes here and there, plus brand new covers from the greatest of all the current Western cover designers, Kevin Diamond. We felt confident we might be on the right track.

The forewords were written, the keywords tweaked, the covers were on point, the content was perfect. The first two books hit hard and are currently hitting harder than ever before. Hundley, a modest man, sends me a note saying his numbers spiked. Why? He was number one in Australia.

Since then he has been making a huge impact in the United States with over 25,000 pages read daily. Two of his books are sitting pretty in the top forty with two others waiting for their turn in the summer sun. The Hundley explosion isn’t some gimmick, either. Readers are truly enjoying his books and sharing a plethora of positive reviews that tell the hardest-hearted author or publicist that future Hundley books may be just as well received.

So, you may be wondering what the point of this is—and I’m willing to tell you. Sometimes you shouldn’t just give up and go rest in the old folks’ home with a heavy heart. Retiring ain’t fun. Sometimes, most times, if you didn’t hit a home run the first time, you just have to turn over the apple and take a bite from the other side. Reconfigure the book and give it another chance.

Don’t be a wilting flower! Sway along with the breeze and get those books that didn’t catch on reissued with a new look, a new style and give it another go.

You only live once.

Got a question for you. What Westerns are you reading currently? Send those reading suggestions over through the contact form below. You can also purchase both, big Mike Hundley hits by clicking here.