For The First Time: The New Paperback Edition Of “Grizzly Creek Runs Red” From Scott Harris!

Meet Jack Bonham: An Interview With A Western Writing Sensation! 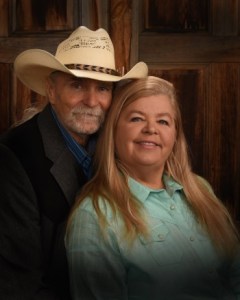 Jack Bonham is one of the latest sensations currently striking at the heart of the Western genre. Author of “Coming To America: Hercules and the Earl: A Western.”

The way that Jack and his wife, Judy, work is completely unique. When Judy has dreams, Jack turns those dreams into stories, which are then published through Outlaws Publishing. So far, readers have been enjoying these dreamed-up adventures, and after reading this great interview with Jack Bonham, I’m sure you will too. Sit down and discover one of the most interesting writing partnerships of today—by reading below!

Int: Thank you for agreeing to this interview, Jack.

Int: Where did the idea come from that finally turned into your novel Hercules and the Earl?

Jack: Over a five-year period, Judy had a series of seven dreams. Hercules & the Earl was one of those dreams.

Int: What were the dreams like? Were they vivid?

Jack: The dreams were like watching a movie in action. Judy knew exactly what was happening and why. They were very vivid, and she knew immediately when she woke up, this was a new story . . .  no question in her mind. The story, in and of itself, was not complete, though. Judy and I always talk about the dreams, then we build the story around the foundation of the dream.

Int: Are there any dreams you haven’t written about?

Jack: Judy and I are now working on a new book, The Last of the Comancheros, which is based on one of her dreams. We have one more dream after that to write around. But Judy believes that when we need more story lines, the dreams will come. If she dreams it, they will write. And no matter what, Judy always knows the difference between a story line dream and the normal day-to-day ones.

Int: How did you begin the writing process?

Jack: I’m a big fan of Anton Chekhov. Having emphysema, he could not live in Moscow with his beloved Olga Knipper, the actress at the Moscow Art Theatre. So, he would get up every morning in the countryside, bathe, then get dressed as if he were going out. I do the same. Rarely do I sit at my desk without being fully dressed to go out. Therefore, my writing process begins in the shower.

Int: Did you find it difficult to get started?

Jack: No, getting started is just that! One must begin somewhere, so begin!!

Int: Did you outline the story, or did you just put it together as it came together?

Jack: Judy’s dream is the outline. That being said, I remember what Arthur Miller said to our class at Yale. If you know the beginning and the end, then take the journey with your characters. Also, I love history and as the story progressed, I found historical people and situations that could fit in with the plot, and I used them. Why make stuff that’s already there if you look?

Int: How long did it take to complete the first draft?

Int: How much re-writing did you have to do?

Jack: All good writing is rewriting. Generally, the spine stays the same. Polishing a turd, however, will simply produce a shiny turd. There has to be something there to work with or rewriting is fruitless.

Int: How different was the final draft to the original story?

Jack: Different only in the quality of the writing and the plausibility of the plot.

Int: What is the book about? Why should readers pick up a copy?

Jack: The book is about death and rebirth. People’s lives are constantly running up against obstacles: bankruptcy, death, divorce, a death in the family, being fired from a job, etc… A story about a character who successfully navigates such obstacles will fill the readers with hope and purpose.

Int: Who is your favorite character in the book?

Jack: My favorite character in the book is Aaron Hawkinson, the Mountain Man. His moccasins may be in the mud, but his coonskin cap is in the stars. Judy’s favorite character is Wells Barkley, the manservant of the Earl. His righteous indignation at every turn tickles her.

Int: How do you feel readers will react to the story?

Jack: Readers will enjoy the tale, but some may be disturbed by the death of Custer. And yet, a man, who, if he lived, would surely have been President of the United States, a Boy-General who repulsed the Confederate Cavalry under Jeb Stuart and won the day at Gettysburg will always have controversy surrounding him. I got this story of Custer’s death from the great, great grandson of the Cherokee woman who committed the act. Sometimes, famous people meet ignoble deaths.

Int: How did you set about finding a publisher?

Jack: Thankfully, I found Outlaws Publishing and its chairman, JC Hulsey, the old cowboy, on a website dedicated to publishers of Westerns. Outlaws pays the best royalties in the publishing industry, and they have an amazingly fast production schedule. What’s not to like? 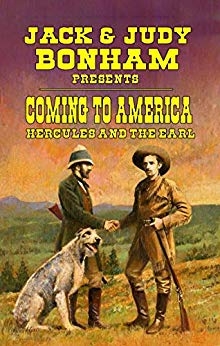 After losing his wife and daughter in childbirth. The Seventh Earl of Hernescroft along with his wolf hound Hercules and his man servant, Wells Barkley, the Earl heads for the new world. In St. Louis he looks up the brother of a friend in England who has written letters back home telling of his adventures in the Americas. The brother is hired to take them farther west. On a stern wheeler he meets a mountain man who takes him hunting with his wolf hound at one of the wood stops. Hercules chases an antelope and is lost. The Earl is heartbroken because this is the last gift his wife gave him.

He plays the fife in order to bring back the dog. Hercules hears the music being played and rushes to where he thinks his master is. Greeting him is none other than the 7th Cavalry. Custer thinks it’s as a sign from God that he will be victorious in his battle with Sitting Bull. Hercules is wounded badly at the Battle of the Little Big Horn and is rescued by a Montana Territory farmer who nurses him back to health.

The dog bonds with the farmer and his family and saves one of the girls from a bear attack but is wounded even worse than before. The farmer puts up a notice at Benton’s Landing about the dog.

The Earl sees the notice and travels to the farm. Hercules and his master are reunited. The Earl decides to stay in the Montana Territory, buys a ranch and raises cattle. He hires the farmer as his foreman, and Hercules enjoys the best of both worlds.

Where to find it:

You can get your copy of “Coming To America: Hercules and the Earl: A Western” from Amazon.