The Man Who Made The Magic: An Interview With Record Promotions Expert Harvey Cooper

The Truth About Hitmaker Cobb: An Interview With Current Top One Hundred Bestseller Douglas R. Cobb

This great new interview with Douglas R. Cobb was conducted by hit writer Scott Harris. Scott always features great talent– and Cobb is now exception. His latest book “Bounty Hunter on the Border” is currently racing up the chart, and currently sitting in the top one hundred. It’s taken a lot of hard work to make Cobb a bestseller! But, what was it about Mister Cobb that readers eventually went crazy for? Well… lets find out! You can read the original interview right here.

My Dad really loved reading Westerns long before I ever decided to check one out and see what made him love the genre so much. I’d say his love of reading Western novels, which he also passed on to my two older brothers, Robert and Richard, is what led me to loving the feeling that reading a great Western gives to fans of them. The drama, action and adventure in a well-written Western easily matches, or surpasses, the best novels written in any other genre.

I was, and still am, also a fan of reading science fiction, mysteries and other genres, though I have come to love Westerns and the skill it takes to write one. I especially enjoy the deep-seated sense of morality and justice that many Western protagonists have, and as far as Western TV series and movies go, I’ve also loved and still love watching them.

I’ll go old school with my first two choices, Scott, and say Louis L’Amour and Zane Gray, and when it comes to more recent ones, well, of course there are terrific books by authors like yourself. Loren D. Estleman is another one that comes to mind, along with the Westerns of other very talented authors like Clint Clay, Cherokee Parks, Wesley Tallant, Juliette Douglas and many, many others.

Any that are filled with pulse-pounding action and realistic depictions of what life was like in the era when the Wild West flourished. “Lonesome Dove” would have to be very near the top of my list, if not at the number one spot. It’s a perennial best-seller for a very good reason — it’s a fantastic and engrossing Western. I totally love watching and re-watching the miniseries based off the novel, so that’s for sure one I would have liked to have written, without a doubt. “True Grit” is another one.

Hmmm … Well, I anticipated that question, I suppose, answering an earlier one. “Coyote Courage,” which you wrote, Scott, would be one of them, though the most recent one I’ve read is the latest Marshal Timber novel, written by Robert Hanlon. There are many excellent Western authors writing today, though, and eventually, I’d love to read even more by you and by authors like Clint Clay, Cherokee Parks, Robert E. Woods, Paul L. Thompson and others.

It’s hard to choose, but let’s go with “Riders of the Purple Sage,” “The Quick and the Dead,” and “Lonesome Dove.” The order is not necessarily written in stone — they are all terrific Westerns, to be sure!

That might change on a daily/hourly basis. I would have to include “The Good, the Bad and the Ugly,” as well as probably any other Eastwood flick. I’m a big fan of John Wayne movies, also, and have favorites depending on the stages of his career — “True Grit,” “The Cowboys” and “The Shootist” are examples I really like, and “Big Jake,” etc. For a third (I’ve named more than that, but I’m cheating by going by lead actors), “Lonesome Dove” — “What would Gus Do?” and other iconic memes, T-shirts, etc., prove that the miniseries is still extremely popular, and the acting is impeccable.

If I were to narrow the choices down to not just Westerns by my favorite actors in Western movies, I would say “The Good, the Bad and the Ugly,” “True Grit” probably, and “Lonesome Dove.” Great question, though, and there are many fantastic Western flicks to choose from.

All of them, if I’m being serious, but for different reasons. “Crossing the Dead Line: The Guns of Bass Reeves” will always be up there for me, as it was my first Western. However, when it comes to my more recent ones, all of them once again — while I’m writing them, for sure! “Gunshots on Hell’s Border,” which focuses on the life and adventures of the fictional bounty hunter Matt “The Boot Collector” Hardy, is also one of my favorites, Scott, as it’s the first one I wrote for Dusty Saddle Publishing.

That would be the short story collection “The Guns of the Gringo,” which is scheduled to be published by Dusty Saddles Publishing next month. “Bass Reeves Outwits the Devil” is the most current one that’s out now, and I’m right now in the process of writing a novella with an iconic Robert Hanlon character, Marshal Jake Timber, as the lead male protagonist.

I jumped the gun with my answer to this one, revealing my incredible psychic abilities! Either that, or maybe I just might have read on ahead, LOL! The next one that will probably be out before the end of September will be the Marshal Timber one I mentioned. I can say the title of it is “Marshal Timber Rides to Hell’s Border and Beyond.” It will definitely be action-packed and full of adventure, gunfights, and it will team Marshal Timber up with a few of the Deputy Marshals of Hell’s Border that I have written about.

Any place with modern plumbing and toilet paper, though none of that existed back then. If that’s not taken into account though, and the question is meant to be asking which era/year based on things like the Wild West heroes who lived then, possibly Fort Smith, Arkansas, would be my choice, though I’ve also lived in Arizona and in Texas, so any of those would be fine by me. As far as the year, probably a few years after the Civil War, so that there would be somewhat of a distance looking back at it, so folks could reflect on it and its aftermath. Maybe 1883 or 1884. 1883 is the year I have set the upcoming Marshal Timber book in.

All of the questions you’ve asked are terrific ones, Scott. Maybe one of the only other ones might be what’s your favorite beverage and/or cigar to enjoy while you write your Westerns and/or read them! Though whiskey or bourbon might be obvious choices, and I do like drinking on some occasions, generally it’s black coffee that fuels my nights of writing Westerns, and when I have a cigar, more often than not, it’d be a decent Maduro.

Another question might be, who would you say is your favorite lawman of the West/Wild West?

Again, what a great question, I have to say! Let me think about it … okay, I’m ready now!

U.S. Deputy Marshal Bass Reeves, probably, though maybe Heck Thomas, Bat Masterson or Wyatt Earp would be other good choices. It’s difficult to say, as we now think of them as primarily historical figures. What sort of people they were in real life might be somewhat different from our idealized conceptions of some of them.

I’ve truly enjoyed answering your questions, Scott! I recommend any fans of Westerns to check out all of your fine ones, and of course, mine, as well as the ones I already mentioned and other excellent Western authors who are now writing some of the best literature around in any genre! 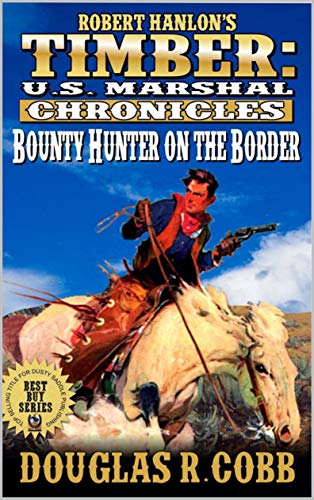 This is the latest novel from Western adventure bestseller Douglas R. Cobb! With pistol and rifle in hand— Timber blasts his way through the bad guys to bring peace and justice to the Old West!

Marshal Jake Timber sets his own rules when it comes to hunting down outlaws. He has his own brand of justice, which usually does not involve the courtroom. He prefers to shoot first, and not ask questions, ever.

When his childhood friend and his family are brutally murdered, Jake, seeking to avenge the deaths, teams up with the lawmen from the Hell’s Border town of Fort Smith to track a notorious band of outlaws who have set a trap for Timber, leading him and his posse into Indian Territory and entangling them in a web of deceit and lies. Available now from Amazon!