REBLOG: How To Write A Bestseller With Western Writer Scott Harris: Mile 5: When to Write

REBLOG: How To Write A Bestseller With Western Writer Scott Harris: Mile 6: Software

You can read the original interview, conducted by Scott Harris, by clicking here.

I suppose the mid-1980s was when I first started getting into Western films, but Western writing came much later — 2011 or so. I liked the drama in it. It was similar to science fiction, which focuses more on the future; Westerns focus more on the past. There’s something romantic about a wide-open world that is filled with endless possibilities. It’s what the pioneers faced, and I suppose that, after so many vacations spent all throughout the West, it was only natural that I somehow would craft stories that took place there, in the past.

Juliette Douglas and Kenneth Pratt are the two that have been the most help to me as a writer. Juliette’s characters are spunky, easy to relate to. Ken’s work is much more detailed and involved, with a depth that makes his books highly realistic. Scott, your style of storytelling is refreshing, and I see a lot of similarities in our work. Like yours, my stories are told in a combination of first- and third-person narrative, and I’ve always liked that way of conveying material.

There are LOTS of books I wish I’d written. “To Fame’s Proud Cliff” by Bob Dunbar is as fine a piece of historical fiction as I’ve ever read, and much of it takes place in the West. Sam Houston and Andrew Jackson’s story is a fascinating one, full of political intrigue and Native American background. I find the level of research that he put into it to be mind-boggling. “Willow Falls” by Kenneth Pratt is a classic Western told in a Christian style — not an easy thing to do with characters that can be violent, etc.

“Colorado Wind,” my first book. It is the most personal, took three years to write and established the characters in the “Western Wind Series.” My dad always wanted me to be a writer, something I hadn’t done since I was in high school. He knew I was writing a western and probably never dreamed I’d ever see it to completion. He never got the opportunity to read a single word of the rough draft, and died unexpectedly 15 months into the project. So I have a lot of regret that I didn’t work faster.

“Yukon Wind,” the second installment in the “Western Wind Series,” was released April 7 of this year, and re-released under the Outlaws Publishing label last week. It took about two and a half years to complete it, and it takes place during the Klondike Gold Rush in the late 1890s.

I have a number of projects in the works at the moment. The next book will be the first in a new series, tentatively titled “Cody,” a dramatic retelling of the life of Buffalo Bill Cody. “Wyoming Wind,” the third and final book in the “Western Wind Series,” is something else I’ve been working on. Then there’s “1906,” a fictionalized story centered around the Great San Francisco Earthquake and “Pilgrim,” a science fiction exploration story about people fleeing religious persecution on Earth. I’m also about a third of the way through an original “Star Trek” novel.

The mid 1880s in Colorado. I’m drawn to Colorado mountain history in general, and have always found the mining and gambling industries in the state to be fascinating.

Do you ever wish you might write a screenplay of any of your work?

I do! I have no experience writing this kind of material, but could see myself someday completing something like this. 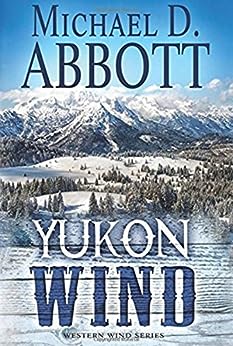