REBLOG: How To Write A Bestseller With Western Writer Scott Harris: Mile 2: Why Write?

Isn’t it wonderful that so many authors are being recognized? Recognized as writers of great western fiction. Thanks has to be given to Scott Harris, a great western seller himself, for putting together interviews with many of the latest, and greatest names in the genre. I think Harris is becoming the Alan Lomax of the western genre. This new interview is with Juliette Douglas. Her latest hit “Pocketful of Stars” is currently riding it’s way up the bestseller charts! You can also read the original interview by clicking here.

I loved Westerns as a kid, then fell away from them. Picked back up watching and reading when I began writing them.

Hum … I think honestly for me there is only one. Louis L’Amour.

None of them. I know that’s weird, but I like my own unique style of writing and telling stories that are different from the countless other Westerns out there.

The “Desert Island” question. What is your favorite Western book?

Don’t think I could pinpoint just one.

“The Rare Breed” when they first introduced the Hereford to American cattlemen. Though, if you go back in time, it was Henry Clay of Kentucky who first brought that breed to the young United States. Back before 1834. And, to this day, you can still buy descendants of his original stock from his estate here in Kentucky.

That’s a tough one for me to answer. The “Freckled Venom” series was my first set of books. I loved how the characters developed and continued with each novel. I loved writing “Perfume Powder & Lead: Holy Sisters” because of the absurd idea of soiled doves masquerading as nuns to rob a bank. It has a lot of comedy in it, and I got to revisit old characters from the “Freckled Venom” series in that one. I wrote a mail-order bride book, but again, it’s not your typical mail-order bride book. It has a lot of action and adventure in it, and it covers the mountain men era of that time. I love writing about strong female characters who have grit and stamina and ain’t afraid to shoot. I manage to put them in quirky situations that make the story come alive, and my readers seem to like that. All of my novels have a special place in my heart.

I just finished and published “Pocketful of Stars,” my eighth novel. My female character, Carlie Anne Russell, is a little scatterbrained, but that adds a fun twist to the story. She’s trying to keep a land baron from running her off her land. A friend of hers, Harley, calls in reinforcement by the name of Colt Rawlins, and he can’t stand Carlie Anne, but he promised Harley he’d do his best to help her. It also has quite a bit of comedy, and it was fun to write.

My next novel, which I hope will be published by Dusty Saddle Publishing, is titled “Freckled Venom Vixen, The Early Years.” This one covers the backstory of bounty hunter Lacy Watson before she met Marshal Rawley Lovett and the gang in White River. I make reference to her in “Perfume Powder & Lead” working with a Tate Morgan. This is their story.

Next up will be “Bed of Conspiracy.” I am writing this fiction novel based on little-known actual facts in history dealing with the Knights of the Golden Circle, President Grant, and the attempted assassination of him and take over of Washington, D.C., by this powerful, underground secret society. It’s coming along quite well.

For Christmas this year, I have the return of the Freckled Venom Gang. I’m combining the characters from first four books together once again in a reunion of sorts: “Freckled Venom Plum Dickens of a Christmas.”

Then I have my first children’s book, “We Are Awesome Possums.” I raised eight abandoned possums, and this story is told through two who could not be released back into the wild due to birth defects.

After the Indian wars in Montana or Wyoming.

Is there a question you’d wish I asked? The answer?

I know readers always like background info, so here is mine. I write under the pen name of Juliette Douglas.

I had never written a thing before in my life — I didn’t spin stories when I was a child or anything. I’m a late bloomer? I woke up with these stories one day when I didn’t have a computer, or internet. My step-mom gave me an old one of hers that used floppy disks. Since then, I have fried four computers and a printer. I now have eight books published and am writing more. God has blessed me with a talent I never knew I had, and I thank him every day for that. I also thank a retired publisher who read my first raw draft and told me how to format into MS style and who insisted I needed to publish. He also suggested the title “Freckled Venom,” which now has become a series.

In my other life … I wash, wax and detail boats, which is a seasonal job and allows me to spin my crazy stories in the winter.

So here it is in a nutshell!

Thanks, Scott Harris, for this interview! Until we meet again … Happy Trails! 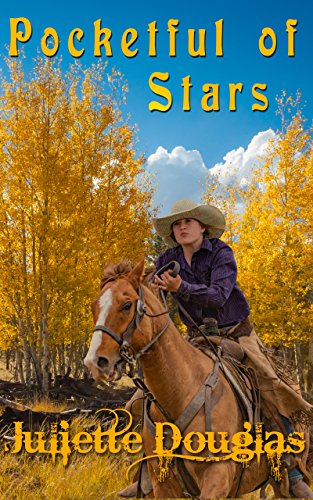