Pastor Jim Burnett, With A Grin, Holds Copies Of His Hit New Western In His Hands For The First Time

It’s always good to see a brand new interview from Cherokee Parks. Cherokee, who has been writing for many years, has been one of the big western success stories of 2018. Each of his books has been a topseller, and he has many more to come. This brand new interview comes from “Forum.” You can read the original by clicking here.

As a child, I fell in love with the lifestyle as much as the Westerns themselves. Why is harder to answer, and yet easier in some ways. When you grow up a cowboy, it becomes a part of you for life, something you never let go of willingly. Having gotten buttonholed into writing mystery/suspense/thrillers by publishers who didn’t want to believe there was still a market for good Westerns, I all but stopped writing for publication. It wasn’t until I broke away and started writing Westerns again that I found my love for creating stories that I enjoyed, in hopes others would also find them enjoyable.

It’s really hard to pick just three, as there are so many really good Western authors out there, both living and deceased. But my top three would have to be Louis L’Amour, Zane Grey and Elmer Kelton. Larry McMurtry comes in a distant fourth. Then again, I’m one of my favorite Western authors, though not famous — yet.

“Hondo,” “Conagher” or the Sackett series.

Another tough question, as I really like so many of them. But “Hondo,” “Conagher” and the Sackett series immediately jump to mind.

“Hard Ride to Cora,” as it was my first Western in decades and contains a great cast of characters, many based on the tales of my ancestors. However, I like every story I write, and find myself going back to read and reread them several times.

“Colt’s Justice: Town on Fire” continues the story of Coulton Raines, Jr. as he does his best to bring justice to a wild land. And even though he does this “for hire,” he is far from being a bounty hunter. The story takes place in the same area of Tom Green County, Texas, as the original short story that introduced Colt to the world in “Colt’s Justice: Almost Home.” In this one, a number of the characters in the original story are back, and this time Colt comes to the aid of some of those same individuals as they face the loss of what is theirs to two bands of outlaws.

Western Wyoming, in the area south of Yellowstone, during the 1880s. But why just a year? A lifetime would suit me better!

Is there a question you’d wish I asked?

What do you consider the hardest part of writing Westerns?

The answer? The research, all levels of it. Like my mentor, L’Amour, I only write about areas I’ve actually visited, so my geographic detail is as close as possible to the real thing. Like all authors, I use some “artistic license” in my geographic detail, just to make things fit better at times. I also do a ton of period research just to make sure my clothing, weaponry and other elements all ring true to the reader. Do I make mistakes in that detail? Certainly, as there has yet to be an absolute authority on any of it, at least that I’ve found. Also, making certain I reference actual history, or people from that area and era, correctly is very important to me. But I rarely allow history or famous/notorious people to be more than a reference in the story, as creating fictional characters is much more fun to me than tempting the fates by tracking real events or people throughout history, especially a history that is between 100 and 150 years old with many parts widely challenged or openly disputed.

I suppose some authors would say that writing the story is the hardest part, but to me the only hard part about that is keeping my timelines straight so that the sequences are believable and as realistic as I can make them. And the only reason I find that to be the case is that my stories tend to take on a life of their own as I write them. I may have an idea about where they start out, but that soon disappears after the first few chapters. In the words of Louis L’Amour, “One day I was speeding along at the typewriter, and my daughter — who was a child at the time — asked me, ‘Daddy, why are you writing so fast?’ And I replied, ‘Because I want to see how the story turns out!’” 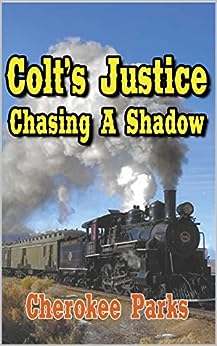