Submitted for your consideration… a writer of westerns who I recently met. A man who has made a living out of noble deeds—politics and the military. A man who has served. A man who now continues to serve by writing westerns for an appreciative reader base. Meet Charles Ray. His latest release “The Adventures of Bass Reeves Deputy U.S. Marshal” is currently climbing the charts—and you’ll love it. 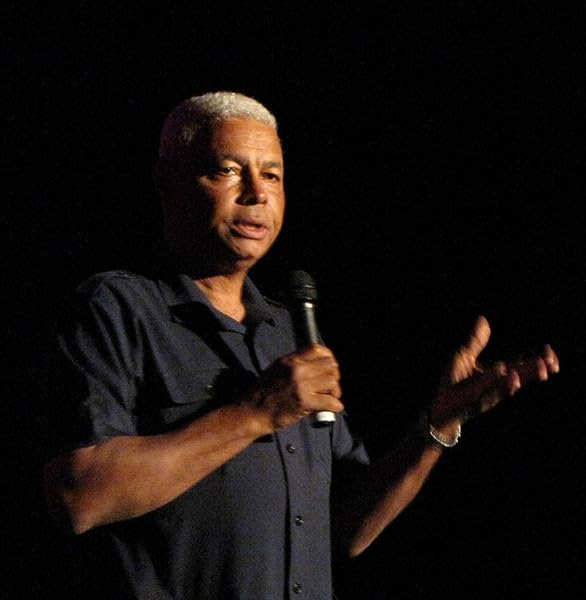 “I’ve been writing fiction since my teens, having won a national short story writing contest sponsored by a Sunday school magazine. During the 1960s I wrote poetry for the European edition of Stars and Stripes, and have done articles, reviews, cartoons, and photography for a number of publications in Asia, Africa, and the U.S. I write in several genres, mystery, fantasy, urban fantasy, and humor, in addition to non-fiction; but, my favorite is mystery.

I wrote a book on leadership, Things I Learned from my Grandmother about Leadership and Life, in 2008, which continues to enjoy modest sales but a growing reputation on three continents. In 2009, I went back to my first love, fiction, with Color Me Dead, the first in my Al Pennyback mystery series.

I was editorial cartoonist for the Spring Lake (NC) News from 1977 to 1981 and had a regular cartoon page and did cover art for the now defunct Buffalo magazine, a publication geared to showcasing the contribution of soldiers of color in US history.

I began the Al Pennyback mystery series from a desire to see stories about Washington, DC, my adopted home, that focused on the ordinary people rather than spies, lobbyists, and politicians.

I write for a number of Internet sites; I was a featured travel contributor on Yahoo Voices from 2010 to 2012 until the featured contributor program was terminated, and am the diplomatic correspondent for asnycnowradio, an Internet radio station based in New York.”

How did you get involved with Westerns, of all things?

When I was ambassador to Zimbabwe, I’d already been publishing, mostly mysteries, for several years. I noticed, though, that the young people on my staff were abysmally ignorant of the true history of the Western frontier, so I decided to write a few novellas to set them straight. Initially, I categorized them as historical fiction, but soon after publishing the second in the series (the Buffalo Soldier series is now 15 volumes and counting) I noticed that reviewers were calling them Westerns, which I suppose they were. So, I started tagging them as Westerns on Amazon, and sales began to take off. Amazingly, I found that I enjoyed not just writing them, but doing the research to make sure they were as historically accurate as I could make them, so I began writing other ‘Westerns,’ such as The Last Gunfighters and Mountain Man. The latter is one of my more popular books, which continues to sell well six years after publication. I don’t consider myself a Western writer or a mystery writer anymore, but just a writer who tries to tell a story that the reader can identify with and enjoy. If I had to choose, though, I’d have to say that I enjoy writing the Westerns most of all.

Now, you’re a heavy reader, aren’t you? Do you actively read Westerns, or are you interested in other kinds of books?

I’m an avid reader of just about everything (except possibly romance—not my favorite genre.) I’ve been reading since my mother taught me to read when I was four, and by the time I was in fourth grade had read every book in my school library.

Where did your interest in Bass Reeves come from? Was he always someone you wanted to write about?

I learned abut Bass Reeves when I was doing research for one of my Buffalo Soldier books. I was instantly fascinated by his story and felt that this was one that should be shared with a wider audience. I did the first one, Frontier Justice, and was planning one or two sequels, when I was contacted by a Western publisher in Texas and asked to do a series of stories about Bass Reeves that would appeal to younger readers. That series, The Adventures of Bass Reeves, Deputy U.S. Marshal, has become five books that are doing quite well with readers of all ages, and I’ve got at least five more in the pipeline. So, I suppose the answer is that I became interested in Bass Reeves after learning of his existence, but now he has become an integral part of my writing life.

Why do you think we are currently seeing a huge resurgence in interest when it comes to Westerns?

The Western is a truly American creation, describing as it does—not always accurately in the past—a defining era in American history. The world is currently in such a state of turmoil, I think people see the Western, with its codes of conduct and themes of man against nature and other trials, as a haven to escape for a few hours from the seemingly insurmountable problems of the present.

How do you feel about the writers who are currently having such success with Westerns? Do you enjoy the new wave of Western writers?

Now that I’m writing in the genre, I’m discovering that the community of Western writers is much larger than I would’ve imagined it to be. I’ve also discovered that Western writers, in the main, are a much more sharing group than those in many other genres. I’m as happy as a hog in mud to be associated with such a community.

What will your next Western be called… and what will it be about?

I haven’t made up my mind. My journal of future writing projects has about twenty potential plot lines, mainly about Bass Reeves, but I’m also writing about a young man who travelled with his family from Iowa to Oregon and who is growing up on the frontier (the Daniel’s Journey series), as well as some general Western stories, including a few stories about some of the African-American outlaws of the Old West, like Isom Dart. I’m sort of leaning, though, toward a story about Bass Reeves before he became a marshal, that I’ve tentatively titled Bass and the Preacher, which is a play on the title of an old movie, Buck and the Preacher, which I recently saw again on one of the retro TV channels. This is a fictionalized account of Bass running away to Indian Territory during the Civil War and during his flight encountering an itinerant preacher who lectures him constantly about ‘doing the right thing and living a righteous life.’ This is intended to be sort of a back story to explain Bass’s tendency to give morality lectures to the outlaws he captures. A totally made up story not supported by any historical evidence, but I feel that it adds an interesting dimension to the character.

How was the writing process? Did you have an easy time writing it, or was it more difficult?

I’ve worked as a newspaper reporter and done magazine writing, but writing a full-length work was difficult for me at first. A novel, even a novella, is so much different from the shorter stuff like articles and short stores, it took me a while to master it—that’s probably an overstatement, because I don’t think we ever master it, but I get better with each book. My first book, a nonfiction book on leadership, took me four years to write. Each book, fiction or nonfiction, is structurally and administratively easier than the one before it. By the time I wrote Frontier Justice, I’d already done over twenty mystery and Buffalo Soldier novels, so, once I decided how I wanted to structure it, the writing was easy. I think I finished the first draft in two months, and then another two months to polish it up. I can now complete a Western in a month. So, I guess the short answer to your question is that it has become easier for me.

How do you balance writing with your everyday life?

I was in the army from 1962 to 1982, and a diplomat in the U.S. Foreign Service from 1982 to 2012, and I wrote in my free time. What that means is, I got up every morning about 5:30 or 6:00 and wrote for an hour before going to work, and then wrote again from about 9:00 to 11:00 pm at night. Since I’ve retired, my day is: up at 5:30 and get the emails and other administrative stuff out of the way, then write until around 10:30. I take a break until about 4:00, and then write for another two to three hours. I do this six or seven days a week, depending on what other projects I’m working on. Occasionally, I will take a day off, about once a week, and take the wife out for the day, or spend the day with my three grandchildren. But I always keep a notebook with me to jot down plot ideas, interesting dialogue or descriptions, or ideas for characters. Even when I’m doing something else, like the summer workshop on professional writing I run for Rangel Scholars, I’m running over story ideas in my head. It sounds confusing but works for me. And a plus is now that I’m retired and don’t have to get up and go off to work every day, my writing in my home office keeps me out from under my wife’s feet and thumb, which she’s happy with.

How did you get signed by Outlaws Publishing?

J.C. Hulsey contacted me to interview me about Frontier Justice, and after the interview we got to talking about how to attract new younger readers. I mentioned doing stories about Bass Reeves and also about young people on the frontier, and he offered me a contract. The rest is history.

What was the first record you purchased?

Wow! That’s a hard one. I have a collection of over 500 vinyl records from the ‘50s and ‘60s and have no idea which one I bought first. I have every Elvis album, the Coasters, Jackie Wilson, and so on. I imagine a Jackie Wilson album was my first, because I was always captivated by his vocal range and his songs, but it could also have been an Elvis album.

The first book you read?

The first full-length book I read was Edgar Rice Burroughs’ Tarzan of the Apes, which was in my school library. I think I was in third grade at the time.

What was your first experience of the Old West?

In 1972, I was posted at Fort Huachuca, Arizona for intelligence training, and on weekends when we had down time, I would explore the region around the Huachuca Mountains and as far away as Tucson, Tombstone, and some of the other Old West towns and sites in the area. I even went horseback riding in the mountains, often alone, and pretended that I was an Old West pioneer trailing outlaws, which was a bit childish, considering that I was a captain in the army, but I’ve always had a somewhat childish imagination. Since then, I ‘ve lived or worked in Nevada, California, New Mexico, Oregon, and Utah, and have the opportunity to visit a lot of the famous Old West sites, towns, and forts, and they figure prominently in my books.

Thank you for your time.

It’s been my pleasure. I’m always happy to share my writing journey with others.