Robert Hanlon– that’s a name many Western readers are familiar with. Why? Because he’s one of the biggest names in the Western book business. His first novel “Texas Bounty Hunter” was number one for weeks– since then he’s tied up the charts with a number of big hits… and… he has a new one. “Pecos Bounty Hunter” is the name of the book. It’s currently climbing the charts… This interview is with the man who makes the magic happen. What a man! What an interview! Let’s meet him.

An exciting new Western in the style of A.H Holt, Alex Cord, and Bruce G. Bennett filled with action, adventure and plot twists such as G.P Hutchinson, Robert Vaughan, and C.M. Curtis! This is a book that is filled with the bodies of dead bad guys!

A bounty hunter always catches his prey, even if the dead men are dangerous murderers who will stop at nothing to destroy the very fabric of American society. One particularly determined bounty hunter is hired by a town overwhelmed with crime. With murders at every turn, and death a way of life these townsfolk are desperate for help. There’s one problem. They don’t have money to offer.

The Bounty Hunter makes a deal with the townsfolk and together they fight to rid the town of a frenzied gang of outlaws.

Using any force necessary to get the job done– showing no mercy… they will stop at nothing to reclaim their homes, and their dignity.

This exciting new Western from Robert Hanlon takes the reader on a rampage as one bounty hunter, and a town of angry folk, go to war finding courage they never knew they had.

So if you like reading Brad Dennison, Dave P. Fisher, and Lou Bradshaw, then you’ll love “Pecos Bounty Hunter” from bestselling author Robert Hanlon! Download your copy now from Amazon! 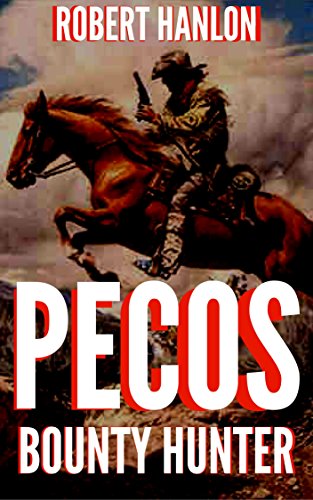