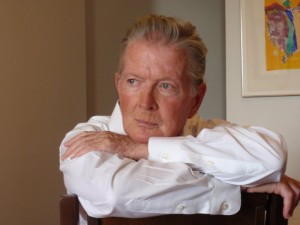 Gordon Osmond is a man accustomed to attention. After many, many years of success as a Wall Street lawyer he gave it all up. He became a writer and a playwright. Gordon has since become a lauded playwright, and a well-respected writer. His novel Slipping on Stardust and his unauthorized biography Wet Firecrackers have become hot sellers, and he has found the home of his dreams… Brazil. He now hosts a weekly radio show for authors and spreads his thoughts about writing across the world. I managed to snag Gordon for an interview and here he is!

Hi Gordon, are you ready?

I’ve been looking forward to this one.

Well, let me start by asking– how is life in Brazil? Why Brazil? Didn’t Belize appeal to you?

Brazil is my reward for thirty years of hard work as a Wall Street lawyer in the Big Apple. The love of my life is Brazilian, so Belize didn’t have a chance.

Yes, you had an enviable life as a top lawyer in perhaps the most vibrant city in the world. What drove you to take a leap of faith into the poverty stricken world of writing?

You’re right. There’s a lot of poverty in the world of writing. However, sometimes, in the right circumstances, writing can produce great rewards, whether it be writing a winning legal argument or penning a best seller.

You’ve done both of those, of course. Am I right in saying that Slipping on Stardust is approaching bestseller status? It’s an excellent read.

Thanks for your favorable assessment of my debut novel. I hope that others will agree with you.

I enjoyed it immensely and I didn’t know what to expect. I think you have a very original style and I guess one of the big questions for me is where do you find inspiration for your work?

Thanks again for your generous comment. I gain inspiration from life experiences that have a strong impact upon me. I believe that conflict and intensity are the driving forces that produce compelling writing.

Do you think the trend of self-publishing has lessened the quality of writing? Do you think compelling writing is a rarer thing than it once was?

Wow, what a question. There is no doubt that publishing has changed radically in the past several years. As a purely personal matter, I decided that I was going to foist on the public only a book that had at least been read by eyes other than my own.

Yes, being published was always a major goal. I’d be most gratified if others find entertainment or enlightenment in my work. However, my primary motivation is to achieve the personal pleasure of expressing myself effectively. If others find value in it, that’s a bonus.

Have you always felt a need to express yourself? Are you naturally creative or have you only indulged in creative endeavors recently?

Yes, always. I have always expressed myself through love, education, and creation. For me, that’s all there is. Love is innate; education is a bestowed blessing; and creation is a wondrous byproduct of the other two.

Creativity is a wonderful thing. I was really impressed by your opinion on Johnnie Ray. At 23, I’ve never met anyone who saw him live or heard anything more than his hit Cry. What was he like as a concert performer? Was he as dynamic as he seems on record?

Yes, he was a fabulous performer in concert. He selected his material with great care and gave it his all. l also treasure his film performance in There’s No Business Like Show Business with Marilyn Monroe, Ethel Merman, and other greats.

I loved that film, too– his only film appearance, I believe. Are you a varied listener? Do you like all kinds of music or do you concentrate on the “great” singers? (He writes, as he puts an Ella album on…)

Ella, of course, was the greatest! Unfortunately, in concert, she was a bit dull as was Nancy Wilson, an equally mesmerizing jazz vocalist. Even the great Sarah Vaughan was disappointing in person. But who cares? The recordings are immortal. By the way, Pete Kelly’s Blues, with Ella and Peggy Lee, is to my mind, the most undervalued film ever!

I can imagine Ella being quite dull in concert, but the songbooks are magic and, as you say, the recordings are immortal. I loved that movie and believe it or not, the soundtrack to Pete Kelly’s Blues was one of the first LPs I ever bought. How do you feel about Elvis? Over-hyped? Undervalued?

I was a fan of gospel long before Elvis purloined its magic. But to his great credit, he brought it to mainstream audiences without them even knowing from whence it came. Elvis was an outstanding talent who, like so many others, couldn’t handle the meteor that propelled him.

I like how you don’t just jump to the conclusions people have about Elvis. I have always had great respect for him and it infuriates me when people judge him based on the caricature he has become in recent years. How would you like your work to be judged in, say, fifty years? Do you ever worry about your work becoming devalued?

A) Never. I’m much more concerned about how my work is being valued today, by persons whose judgment I respect. For example, your opinion means a lot to me, as do the professional reviewers that have given my book 5-Star reviews on Amazon. Sorry for sneaking in that plug.

Thank you! It means a lot to me that you value my work to such a high degree. If you were a reader and you were looking at the work of Gordon Osmond, which of your books would you choose to read first?

Slipping on Stardust, my debut novel. It’s a work easily stuffed into beach bags and holiday stockings. If the reader is interested in knowing more about the author, my “unauthorized autobiography” Wet Firecrackers would be a logical next step.

You’ve written a guide to English language, too? How did you find the experience of writing a guide that would have all the so-called English experts out there re-examining their education?

Of course, if a reader is an English teacher or a language maven who enjoyed Eats, Shoots, & Leaves, my book So You Think You Know English–A Guide to English for Those Who Think They Don’t Need One would be a good choice.

How have you enjoyed this interview? Have you been surprised or disappointed?

Are you kidding? It’s been a blast, and I’ve so much enjoyed the wide range of subjects we’ve discussed. Thank you SO much for the opportunity to spout off, and best of good fortune to you and your website in the very important work you’re doing to help authors.

A multi-talented and entirely unique individual, Gordon Osmond, age 82, died peacefully on February 20, 2017 having lived his life in exploration and fulfillment of his manifold talents and interests. You can read his obituary here.