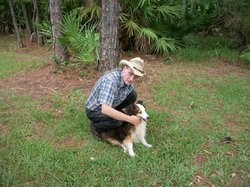 This interview is with one of the giants of the Western writing world… John D. Fie. Jr! You may already know about his books “Incident at Benson’s Creek,”  “Luke Pressor: U.S. Marshal,” and “Blood on the Plains.” These books have been picked up by Western readers, libraries and even bookstores around the world. If you haven’t heard of these great books… you may want to check them out by clicking here. Now… if you aren’t convinced to buy your copies now… you may be after this interview. Scroll down to learn why Fie is leading the pack when it comes to exciting Western adventures!

John… I’d like to start this interview by asking why it was important for you to write a Western?

The Western genre has had me excited since I was a young child. Westerns on TV became the main shows that I watched. I think I was so fascinated by the West that it turned me into a prolific reader of the Western lifestyle and the people of the time. It transformed into a fixation, with me digging through the library for anything I could find about the Old West. It also turned me into a real history buff. There is really nothing else I would care to write about.

As an America… how closely do Westerns represent the American way of life?

That would depend on which part of the country we’re talking about. Apparently, those living in the major cities, like the northeastern part of this country, have a different type of lifestyle where it’s more industrial and financial. The Mid-west has a more complex mixture of Industry, commercial, and farming with a large part of it being influenced by the Western lifestyle. The southeastern states below the Mason-Dixon line have a variety of lifestyles. Farming and ranching play a significant role here where a lot of the population is influenced by Westerns. But when you move west of the Mississippi and the farther you go, Westerns are it. I love visiting the seven western states and talking with people. You can find out so much about their family traditions and history. I use a lot of those findings in my books, so when someone reads one of my books, they’re getting a taste of realism, although I’m writing a fictional story.

Where did it all begin? How did you discover your love of Westerns?

I’ve done a lot of different things in my life, always looking for another adventure. I have a curious nature, I guess you would say. I would see someone doing a job and think, “I wonder what it’s like?” Naturally, I had to find out. But curiously I always stuck with the being free outdoor types of work. Here’s where my earlier childhood comes into play with my fixation with the West. Farming (I’ve done a lot of it), ranching, horses and cattle, and of course, trucking (long haul). It was when I was trucking I started writing short stories. I’d tell a few to fellow drivers and found out they loved the stories. I would write those stories in my idle time in the cab of my truck. When you’re in between those two doors, you’re in a world of your own. You have only the CB radio as a connection to the outside world most of the time. Writing and reading became my only enjoyment. Now, I’ve discovered writing books and sharing my stories with a larger audience is complete happiness.

Where did your cover art come from? Who designed it?

Blood On The Plains, when I first wrote it, had a different book cover. I was with a different publishing house at the time. Contract time was coming up, and I was going nowhere. I began looking around and stumbled on Outlaws Publishing and J.C. Hulsey. My immediate thought was Outlaws—the word stuck in my head. I’m a bit of an outlaw myself, and the name of the company in my mind fit the bill. Well, J.C. took a look at the book and loved the story. We both decided it needed a new cover. The design of the current book cover became a team effort, and when it was released under the Outlaws Publishing name with its new cover, it took off, rocketing up onto the Best Sellers list.

Let’s talk about characters. Who are your favorite characters from your books?

There is no one favorite character. The main characters in my books play a large part in the story I’m trying to tell. They live with me in my head. When I’m writing, they take over and talk to me. It sounds crazy, I know, but that’s what happens.

How about your least favorite character? What makes them less appealing to you?

My least favorites are the characters who pop into a chapter and are gone by the end of it. Most of the time, they’re the villains I’m building as part of the action in the storyline. What makes them less appealing to me is they’re just pop-ins, and they’re not the main story that I’m trying to tell.

If you could change ONE thing about your novel, what would it be? Why?

That’s a hard question to answer, but in book one of Blood On The Plains, I would have to say the ending. I left my readers a little short with the ending. In Luke Pressor: U.S. Marshal, I would introduce him earlier in the story. Some of my readers loved it, and a few, well… they were a little disappointed.

Give us an interesting fun fact, or a few, about your series:

I had a lot of fun writing Book 2 of the Blood On The Plains Western Action Series “Incident At Benson’s Creek.” I wanted to expand the story and make the characters in the book more enjoyable. I don’t remember the town we were visiting, but my wife and I were sitting and eating at this resturant in Kansas. In walks this guy with this accent, and his voice reminded me of an actor we all know. His name I just couldn’t remember, but I said to my wife, “Listen to that accent. It fits Clem, the livery owner in Blood On The Plains.” We both had a good laugh over it. Well, to make a long story short, it turned out that the actor’s name was Strother Martin. The idea then became a reality, and I started to match my characters and came up with another character who would match Bea Arthur (Maude). Now it’s up to the readers to figure out who that is.

Which other books are similar to your own? What makes them alike?

I’m told I have a different writing style than all the other Western writers. I don’t go into lengthy detail on descriptions, and I throw in a lot of quick one-liners. So I don’t really know if I’m different from any of the others, and I can’t think of any really. I just know what I like in a book, and I write mine that way.

Oh, yes. Several, in fact. The Colt, and the Winchester.

Anyone can contact me by going to Outlaws Publishing.com or by writing to Nick@nickwale.org. And if you prefer, johnfie@outlawspublishing.com

I’m currently working on several new projects that I’m researching right now, and I have been asked to please turn the short story of The Bender Brothers into a book. I have the discussed the idea with Outlaws Publishing, and we’re going to run 5 chapters of the Bender Brothers on the Outlawsecho.com free online magazine, in which four chapters are already available. We will then continue it as a book. Also, there is another book 2 of Luke Pressor almost finished, and you can look forward to it after the first of the year with another surprise story coming later with “Cattle Queen Of The Pecos.”

Write those reviews after you’ve finished reading. It makes a world of difference to hear from you readers, and it gives your author a better idea of what you’re looking for.

To my readers, write me, and please let me know your ideas; or if you just want to say hello that’s fine also. You have all the information on how to reach me. Writers, take it from me. That book is your baby, and please don’t be in a rush to publish. Look around and research. Then, when you’ve finished doing that, do yourself a favor and talk to J.C. Hulsey at OutlawsPublishing.com. You will never have a more thrilling experience in your life than when you hold your first published book in your hands.

You have to figure in several factors between the two. John Wayne wears his pistol high on the hip while Clint carried his slung low and strapped down. Clint would win simply because of less arm movement.

Looking for a great Western to see you through the holidays? Why don’t you grab a copy of “Incident at Benson’s Creek” today from Amazon! Just click here to purchase your copy. 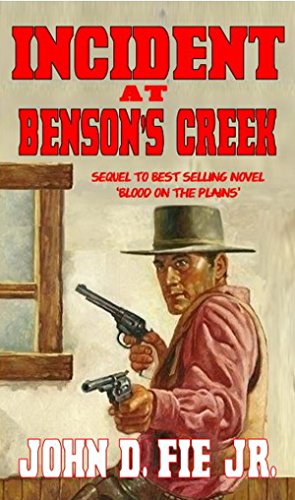