A Nation of Western Lovers: An Interview With Western Author Seth Nation… And A Very Special Free Gift!

It Is Now… The New Groundbreaking Book From Author Rebecca McLendon

This interview is with one of the most interesting authors of 2016– Rebecca McLendon. Her new book “It Is Time” is an exciting look at the state of our world today. With fast-paced action, believable characters and a touch of the ‘divine’ it is highly advisable that you give this book a chance. You will love it… but before you do… Why don’t you take a look at this fascinating interview… It may help you make up your mind!

Being a lifelong reader and teacher of literature for many years, I would say my bibliography/library is almost too extensive to list!  At the top of my list would be the Bible.

As this book began taking form, I reviewed many years of personal notes, stemming from bible studies and personal experiences, and then paid particular attention to books, news articles and the like that substantiated the trends I saw unfolding before my eyes.  The aviation scenes were products of my knowledge base as a private pilot.  I even made out the flight plan in detail for Zoe’s very long cross country flight.  I changed airport names but paid attention to elevations, terrain, etc. to make her flight very real.  I also researched pre-flight and pre-take off procedures for a jet airplanes because the Paradigm 777 is a jet, and Zoe had never flown one.  It was a rather supernatural event once she was airborne.

What did you want to avoid doing with your book?

I did not want this story to be a preachy-preachy type of story, not so overly moralized to the point that people who read it feel stomped into the ground without hope. You will not see “chapter and verse” after every other sentence.  It is simply not that kind of book.  It is a story, unfolding as a story.

How did you try to keep reader interest about such a dry subject?

First and foremost, I set out to write the story of a subject that is NOT dry.  The underlying story within the story is powerfully real, though too many have taken the absolute LIFE out of theological issues.  The very name Zoe means abundant life, abundant health… a soul that vibrates reality in an unreal world.

It was a challenge.  I, like most people, prefer good, happy people and good, happy endings.  However, life is not like that.  The Bible is full of villains. The first villain resided in the Garden and from that villain emerged all things villainous. His treachery begat treacherous creatures, especially among humans.  I have read volumes of novels that accurately depict the human heart of darkness, and the news is full of deeds of darkness that boggle the mind.  I had to consciously get inside the movers and shakers, the plotters and schemers in It is Time, as have story writers before me.  I had to think thoughts and say things that are against my nature even on my worst acting days.  These villains are in this for the long haul.  And they don’t care what you or I think of them.  The brilliant thing about the story is that, for some of these villains, they find hope!!!

There are situations all through the novel that have been inspired by real life situations.  The challenge was to fictionalize them.  This is not a “Dear diary, today this happened and that resulted in this” kind of story.  The supernatural experiences are more real-life than the people experiences in the story.  I want it that way because that is the way it truly is!

Where do you think the world is heading? Is it dying or growing?

When I speak of the world, I speak of a system.  My entire novel is about the clash of two kingdoms, or worlds.  One is a world built by men with men’s quest for power, fortune and dominion over other people.  This world is the dimension that resulted when men bought into the lie of the original Villain. That world is heading for destruction.  It is not the way things are supposed to be.  It is dying.  And it must.  There IS a world out there that is growing.  It grows because more and more people are opening their eyes, their hearts and their ears to understand the world as it was originally meant to be.  The bottom line is, even though these two kingdoms are at war, HOPE will win.  It always has.  It will, however, be on a much different dimension than we mortals are even capable of embracing at this time.

What was the hardest part of writing this first book?

I would say that is answered in the first seven questions!  Character development was my biggest challenge, if you want a practical answer.  I literally had to become my main characters, and now I am carrying some of them into my sequel!  I’ve gotten to know them that well!

I do see it in film format, as well as audio book format.  However, I would be the head watchdog over that film… the message of Hope must remain, or it’s a no-go.  We have too many that glamorize the hopelessness with occasional temporary solutions.  This one must lead to the Hope that is within our reach … if we were to reach.

Writing fiction is addictive.  I would suffer great withdrawals if I had to stop writing.

I want to be Zoe St. James when I grow up. If I cannot write about her, I will just go do what she does.  I will most likely be doing that anyway.

You can go to my Facebook Page and leave a message. You can also check out my Amazon Author Page. I’m looking forward to seeing you there. 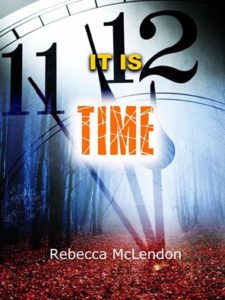 Zoe St. James and those around her have a keen sense of what “time“ it is. A dark kingdom announces, “It is Time,“ while putting an evil agenda in place that will take over all humanity with oppressive control—control of their economy, their faith, and their minds. One man thinks he is the one who will dominate the world, not knowing he is controlled by an even darker power from an unseen world governed by an unseen power structure. On the other hand, there is a Company from another Kingdom whose Head quickens their hearts to know there is a Plan which involves a clash between these kingdoms on a great battlefield. At first the war is subtle and distant to most, but it rapidly moves to the forefront as a significant supernatural events impact the Marginals who have been rejected by the broader society. The clock stands poised at the two-minutes-until-midnight position and all things are ready for established institutions of human kind to wrap up and make way for Something new and exciting to take their place. Why don’t you purchase your copy today, from Amazon! Just click here to start reading in minutes…