As humans we find ourselves being negative more often than being positive. As a writer, it’s easier to be negative about the reception your books have garnered than to find the good. In my everyday job as a promoter of books, I have found that, at times, you are working against a wall of negativity—a writer who doesn’t believe their book will be a success, a writer who doesn’t believe they can write, a writer who feels that other writers are superior—these mindsets, or doctrines, have set up authors for failure. To negate is to take away, to remove, to leave less. To negate is to start your journey as an author who feels as though they have less to offer—and that doctrine is a sure way to fail because believing you are a failure will make you a failure.

I’d like to share a story with you, if you have the time to listen. This story is about an author who wrote an incredibly moving book, a Western, a book that had commercial appeal, a book that could have been a contender. A book that may well have been considered a far superior book to others that were outselling it. This author told me from day one that his book would never sell. It wasn’t a “selling book,” he told me. “It’s a dream that I’ll never achieve to be a selling author,” he once told me as we watched football together. “Dreams are useless things.” I told him that he was setting himself up for failure, but he deemed what I had to say as “mumbo-jumbo,” and pretty soon he soured on the relationship. We parted ways, and I expected never to hear from him again. Several months later, however, I received an email from this man. He had been through a lot in those several months: had lost a job, a wife, a home, and was on the verge of losing his mind. He had taken solace in reading his book and had discovered that it was, indeed, a pretty good yarn. He decided to renew his promotion with vigor. The book wasn’t an overnight success, but it gained momentum and sold fairly well—it still is selling—and it’s with his blessing that I wrote about him in this blog article. In those few months he found the confidence to pursue his dream, and the faith in his own work to see it down the road and through the journey towards success.

The point of my story is that we all have things holding us back—we all have hang-ups, issues at home, issues with 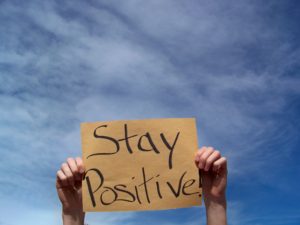 work, and problems to deal with. We all have issues that need to be fixed—and we have people who want us to fix them—but when we start a project on a negative note and we negate ourselves, we are only going to receive the very worst outcome. Time and time again, I have told people about the three C’s—and I’ve had arguments from hither and thither about the usefulness of such a thing. At this stage in my career, I couldn’t care less about what others think. Everyone has an opinion, but I do know that those three C’s have helped a lot of authors become successful, and I know those who are negative have been less successful. So if there is any inkling of good you can find in your book, your readership, and your reviews, take it and hold onto it because it’s the good, the positive and the forward that will lead you to success—not the backward, negative, negating thoughts that we all want to have so badly. Those thoughts will never bring a good thing to anyone’s doorstep.

So why don’t you start today? What happened with your book this week that made you smile? Did you get a great review? A fantastic new interview? A great trailer? A person who stopped you in the street and told you how much they loved your book? What happened to make this week a great book week? I want to know about it. Just drop me a line through the contact form below and fill my inbox with the good that is happening with your book. Let’s focus on success—and success will come from positivity.