The Black Eyed Kids – Urban myth or something more sinister? It’s not just kids with Black Eyes either but increasingly, Black Eyed People and more bizarrely – White Eyed People too….  G. Michael Vasey, a supernatural expert, carefully investigated this phenomenon using real-life encounters with these scary beings. The result is a truly unsettling and sometimes terrifying book that will have you listening fearfully for the knock at your door late at night.  This interview is with the man behind that new bestselling expose– “The Black Eyed Kids: Your Haunted Lives.” Let’s shine some light on the man who exposes these demons…. 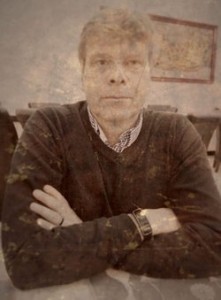 Gary—thank you for agreeing to this interview. Can I start by asking what got you interesting in the BEK phenomenon in the first place?

While I was familiar with the BEK, it was a story submitted to my website – Your Haunted Life Too – that got me interested. It is a very creepy phenomenon, and the encounter that was submitted had the hairs on the back of my neck up – that doesn’t happen too often these days!

Let’s go back to the start—what are the earliest accounts of visitations by these kids?

The problem here is that most people think the stories originate with a particular account at the beginning of the Interne era. Brian Bethel reported an encounter in a car back in 1996 in Texas. However, my research showed that Black Eyed Kid stories go back much further, and I found encounters in the 1950s and even earlier. Before the Internet, such stories were passed around verbally and rarely got wide distribution. In fact, black eyed humanoid stories go back all the way into prehistory.

Are they always kids?

Nope. Some of the creepier stories involve black-eyed people or adults. They share many characteristics with the kids – black eyes, monotone, hypnotic voices, asking for rides or entry. I think the kid stories are more popular because it is difficult to believe a child can be the host of evil.

Do you think these people have roots in mythology? Have you found any mythological basis for them?

Absolutely. Demonic creatures have been described by many races and social groups throughout history that had black eyes or even no eyes at all. Examples include American Indian legends, Japanese myths and much more. The bogeyman or woman of many cultures was here in the forest or the hills waiting to bring bad luck or death and often they were marked out by their eyes.

Have they always existed?

One theory is that Lilith, the first demon, had black eyes. If true, then yes. There are stories on groups like Reddit that are claimed to be written by the BEK in which the claim is they have lived side by side with us since time began, preying on our souls.

What do you think caused these people to become BEKs?

Interesting question. There is absolutely no evidence to support any theory so far as I can see.  However, if they are demons, then the shape that they present is simply a disguise and they are not kids nor human in any way. I don’t think there is any suggestion that BEK victims become BEKs themselves, but you never know.

Do the cases have anything in common—are these incidents connected?

There are many common features of a classic black-eyed encounters. These include unexplainable fear, wanting entry to your home or soul, the black eyes, the element of hypnosis that means even though you want to run, you cannot and more. It is a formula that works and is designed for maximum effect.

Do they pick certain people to visit, or is it seemingly at random?

It seems to me it is at random although in some stories there appears to be a casing out period. People have observed them watching from across the street, for example, for several days. It seems to me they favour remoter locations but then there are stories taking place in busy streets as well. There is also a suggestion that they select only those who have heard about them – so beware!

The one that shocked me most was the one where the couple let them in. They sickened and suffered afterwards as did their pets. Bleeding from the nose and tumors and so on. The suggestion is that they are soul eaters and feed on life energy. By letting them in, you give them permission to steal your soul. One worrying fact is that so many people simply disappear for good, and one wonders perhaps if some fell victim to the BEK?

Is there anyway to protect yourself from these people?

Avoid them like the plague and most certainly – do not let them in.

How can you tell when you are faced with a BEK? Other than their eyes—are there any other ways to tell them apart from your average door knocker?

Typically, it will be two small children – early teens. One will do all of the talking. You will be filled with an unexplainable fear and dread but not know why. The child will ask to enter and you may feel compelled to allow them to. They talk in a monotone and are apparently quite hypnotic. They may even demand entry. Those are the characteristics of the BEK – other then the eyes, of course.

What do you think causes the black eyes?

Eyes are the supposed gateway to the soul. To have black eyes is a common tactic used in horror movies to denote a soulless or possessed person. Black is the color of the lowest form of demon, as well, we are told, so the black eyes most likely denote low level demonic possession. There is also an alternate theory that they are alien-human hybrids that have inherited the eyes from their alien DNA.

Have these incidents only taken place in the United States?

Most of the stories – the ones that follow the form anyway – take place in the USA. However, I did find similar stories and accounts in France, the UK, Ireland and Australia. It certainly appears to be a western phenomenon. Other supposed BEK stories exist in other locations but lack the same formula – such as the black-eyed ghosts children reported in the UK in recent years.

What caused you to write a book about these incidents?

I became obsessed by the stories of encounters and thought I saw some things that were worthy of comment. The formula, the mythological origins of black eyed soul eaters and that sort of thing. It was a hoot to write!

Why do you think these people need to be ‘invited’ into homes?

Even in Hollywood movies and TV shows, a vampire or demon needs permission to enter. In many stories, the BEK not only ask to enter but actually tell their intended victim that they NEED permission to enter. This is entry into the threshold and once given, you have given them carte blanche over you and your soul. 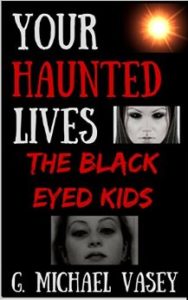 any accounts of people who have asked these people into their homes?

Yes, the one that I mentioned but that seems to be the only one I could find. Others are suggestive as opposed to definitive such as the people who didn’t let the BEK in but then their neighbors disappeared without trace the same night!

Are these incidents becoming more common, or less common?

I think neither. I think the Internet provides a vehicle for the stories to get around and make it seem as if they are more common than perhaps they really are.

Where can we find your new book?

You can find the book on Amazon. Just click here to check it out.

What would your advice be to anyone who wants to get in touch with you with an account to share?

Oh, please do. Go on over to the website and submit the story there. It will be great to hear from you.