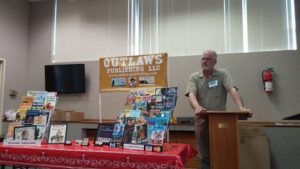 Being a Western writer is one of the most rewarding experiences a man can have. Being a Western publisher must give J.C. Hulsey a pile of pleasure. This interview is all about the man behind the books. It’s all about writing books. His books have sold thousands of copies, and have won awards. His first book “Angel Falls, Texas” is considered by many Western readers to be an essential read.  But what turns a man into a writer? What turns a writer into a publisher? What turns a publisher into a magazine magnate? Let’s find out…

So, you’re gonna start off with a hard question. There are so many, I can’t even begin to name them. Gunsmoke, especially the first ten years with Chester in it; The Rifleman; The Restless Gun; the list goes on and on. I also have to mention the old radio shows that I listened to like The Six Shooter, Death Valley Days, Frontier Town, Gene Autry, Gunsmoke; and just like TV, the list goes on. As for as movies, it’s the same story. Of course, anything with John Wayne, Glen Ford, Henry Fonda, etc.

I really didn’t do a lot of research. I did utilize Google quite a lot to make some of the things realistic.

Jedidiah Isaiah Jenkins is a young man who, because of circumstances beyond his control, had to go on the run because he killed the sheriff’s younger brother. He meets a couple of fellows who travel with him. When they travel to a town that is held hostage by a bad guy, Jed steps up and takes care of the trouble. It wasn’t long until he is called on to travel to other places and clean up their troubled towns. Therefore, he is dubbed the Traveler.

Do you prefer writing about the heroes, or the villains?

The Traveler Series is about a Christian gunfighter, and most of my stories are about the guy wearing the white hat; however, I got this notion in my head that the guys wearing the black hats also has a story to tell, so I have written a few about bad guys.

Villians are just human beings. They had a mama and a daddy, but someplace along the line something happened or perhaps they were just bad from birth. What I’m trying to say is everybody has a story, and it deserves a chance to be told.

I think each person draws from their life experiences when they write. We might not even realize that’s what we’re doing, but I find myself thinking about certain incidents that happened in my life when I’m writing.

Maybe in the distant past, the Western looked as if it were dying, but with the birth of the internet, I’ve found that there are many, many folks who are working very hard to keep the West alive. Authors, singers, poets and others.

That’s an easy question to answer. The hardest part is talking yourself into sitting down and get started. It took me basically all my life before I finally made that decision to, as Larry the Cable Guy says, “Git’er Done!” Your worst enemy is yourself. You’ll talk yourself out of it time and time again.

We can dream, can’t we? At one time, I didn’t think I could or would be an author—now look at me. Sure, I think any of my stories would make a great TV series or movie. Why not?

I learned it wasn’t as hard as I thought and not to listen to others when they tell you something isn’t possible. I learned that if you dream big, big things are possible.

I hadn’t really thought about any message in my stories. Perhaps with Jedidiah, I would want folks to realize that God has a plan for each of us, and it is imperative that we follow the path He has set before us.

I can’t really tell you what’s next. As far as my stories, I have put them on the back burner while I help other authors reach their dreams by publishing their stories in our publishing house, Outlaws Publishing. It’s a goal of mine to educate new and old authors alike to be leery of any publisher who wants to take money to publish their stories.

I’ve already traveled that trail. I’ve had a good life working in the world. I retired from all that, and now I’m enjoying my new career as an author, a publisher, an online radio host and a digital magazine editor.

Are you looking for a great Western adventure? Something that will keep you entertained throughout the week? Why don’t you try “Angel Falls, Texas” by J.C. Hulsey. It’s well worth the price of admission. 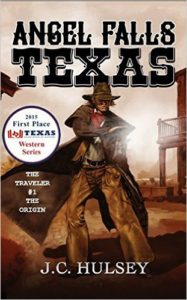