“Massacre! Book 1 in the Secret of the Lost Dutchman” is the first book in a new and exciting Western series from bestselling author Lon Safko based on the true story behind the legendary goldmine.

The secret of the Lost Dutchman goldmine has been legendary for as long as anyone can remember—this is the true story of that legend. When the Spanish government ordered distinguished officer Miguel Peralta to enter the United States with his military detachment, they have gold on their mind. The Spanish have been working the secret Lost Dutchman mine for years—but when a new deal is made with the United States, they will lose access to the almost infinite supply of gold held within it. Peralta’s mission is to remove as much gold as possible from the mine and transport it safely back to Mexico. As his small army winds towards the location of the goldmine, they slowly learn that they are not alone… and they crave only one thing—survival. As Peralta fights to keep his soldiers, including his brother, alive as a murderous enemy stalks them across the desert, he starts to realize the true cost of the gold, and the true meaning of how failure will change his life. Will Miguel Peralta manage to save his men, the gold, and his life, or will everyone die fighting for the gold the Spanish so desperately want?

Action-packed, fast-paced and written to entertain readers around the world, this new Western will be not only your introduction to Lon Safko, but the beginning of your addiction. Ride along with the Spanish soldiers sent to claim the gold of the Lost Dutchman goldmine. You can learn more about Lon Safko by visiting www.secretlostdutchman.com. 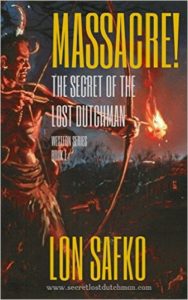 First there were the Western movies. You saw them all.

Then there were the Western periodicals. You read them all.

Now you are reading the Western novels. You read them on Sunday,when you have that kind of lazy day– ‘I’m watching the Alamo, honey. I’ll do that yard work next weekend” kind of feeling going on. You read them at night when you have that “I’m kinda tired, but too tired to watch Jimmy Kimmel” kind of way with you. You read them in the morning before work. Hell, you read them before you make your weekly pilgrimage to Walmart. Let’s face it– you spend more time reading Westerns than doing anything else. But you haven’t read anything by Lon Safko. This, too, will change.

Safko, by definition, is an epic personality. He has pretty much turned the world of business into his own private playpen. He talks, he walks, he sells, he buys. He’s the Don, the boss, the dude. But a Safko Western? You’ve got to be kidding me–didn’t you know already? He’s the Duke. Take this here little known novel “Massacre!” and read it, and tell me if it makes you move the way you want to be moved. If it doesn’t, we are going to making an appointment with Doctor Kildare to see what’s wrong with you. If it does–you’re hooked. You’ve bought into Safko’s epic writing style.

Soon, I hope to be able to afford another visit because he’s sure as hell has cornered the market of addictive reading. The Western is alive and well, and Lon Safko is the king at the top of the tree.

You can catch the latest interview with Western star Lon Safko today by clicking play below!