When it comes to Westerns, it really comes down to story. Most Western readers are careful buyers who really want to lose themselves in a story of the Old West. When I first met Stephen Wilson, author of the fantastic “Frank Palmer Stories” series, I was blown away. Why? Because he couldn’t stop telling me about his story. From the off, the story was the foremost thing on his mind. Now, any author that interested in telling you about their story must have a good idea– right? Right.

This interview with Stephen Wilson is all about his Western series, his stories and the great success he is having—and will continue to keep having. There are two books on the market right now, and those two books tell the story of a man on the run from the law… Let’s talk to Stephen.

I’ve always been a voracious reader, and I think that naturally leads you to thinking about writing stories. I remember in elementary school trying to understand why I liked some books and couldn’t make it through others. Over the years, I came to realize that I liked the books that managed to surprise me while keeping the logic of reality in place.

I found that a good story, the kind of story you remember, is a story that seemed to reflect the world I lived in but found ways to accent that realism with situations that seemed plausible and exciting to imagine. Today, I write books that I hope keep the reader involved by creating stories that seem to naturally flow from well-developed characters facing difficult but believable challenges.

When it’s important to a story, I research the things I don’t know. I was a history minor, and I love American history. But things such as what was the range of a Sharp’s Carbine? I look it up. I’m still challenged by some reviewers on some points, but I always ask them to research it. The Sharp’s Carbine was a heck of a gun.

I love The Unforgiven because it’s a story where everyone thinks they’re right but act according to their own character and world view. Of course, I like the John Ford westerns. Hombre with Paul Newman is another favorite.

In college, they let me write one-act plays for the theatre department. I usually wrote comic pieces, and I enjoyed listening to the laughter of the audience. I love the feeling that comes from telling a story that makes readers or audiences forget the cares of their world while they lose themselves in an imaginary world that I created.

Probably not. I enjoy non-fiction, but I love the creativity that comes from pulling something unique from my imagination. Also, I love finding the humor in the darkest situations, something that would be a detriment to a tragic, real-life event.

You bet. That’s the essence of writing. Without someone as a lead character whom the reader can root for, the story lacks a center. A hero can be an ordinary person with faults and failings, but in the story he or she discovers the courage that lies dormant in each of us – until we are faced with a life or death situation.

As long as I didn’t have to stay there – I’d visit the Old West, the 1920s and the Fifties. Time periods where things were rapidly changing in technology and the ways we lived. My grandfather knew people (by then, old men) who fought in the Civil War. Their world seems so different, but as he told me their stories, I realized they wanted the same things we all so – to be loved and live a happy life. I try to remember that in my Western stories. The characters should be like people we know today to make the story compelling. They were just facing very different circumstances.

Yes. Ordinary people faced with extraordinary challenges who discover strength inside of themselves that they never knew they had.

My next book is the third in the Frank Palmer Western series. Palmer is a young man who lost his parents when he was twelve years old. He was taken in by the notorious bank robber Sam Colter who saw advantages in having a locksmith’s son as a member of his gang. Palmer broke away from them at nineteen and tried to escape that life. Now living under an assumed name in California, he tries to start fresh, but the past has a way of catching up with him. In each book, his life becomes more complex and the threats to his freedom grow in intensity. By the end of the series, I hope it will be an epic tale of one man doing what he has to do to survive while raising his adopted son. In the third book, an unknown adversary demands he come to Sacramento or he will expose his true identity to every newspaper in the state. When he arrives, he discovers that criminals have planned a robbery beyond imagining, and success depends on the dormant skills of the former safe-cracker once known as Frank Palmer.

A large publisher can be a tremendous help with marketing. They have the promotional tools and their imprint’s credibility to provide a new writer with a platform to get his or her work noticed. Self-promotion is the nightmare of most writers, I think.

Yes, there are so many distractions in this world. I am so glad that there are still people who prefer their imagination to the instant gratification of kitten videos on Facebook.

Unnecessary blood and gore. There’s too much of it in the real world.

Writing takes up so much time, it’s hard to imagine writers reading more than the average reader.

Very well. I am pleased. The Amazon and Goodreads reviews for my mystery, “The White River Killer,” have been encouraging. I hope my Westerns do as well.

A yacht – to view the secluded island from a distance. I’m sure it’s lovely, I just think the yacht would be more fun.

You can check out Stephen Wilson’s official Amazon page to find out more about his books here. You can also check out the great interview with his audiobook narrator J. Scott Bennett talking about the “Frank Palmer Stories” series right here too.  Why don’t you pick up the first book in the series today for 99 cents? You may find yourself hooked… 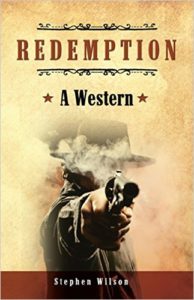