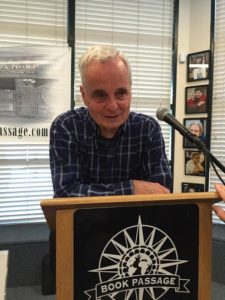 Growing up in Texas in a family with a “can do” attitude, he was always unfamiliar with the concept of limitations. Thus, David Watts has become a doctor, a professionally trained musician, an inventor, a radio and television personality, and an accomplished poet and writer. His literary credits include seven books of poetry, two collections of short stories, a mystery novel and several essays. He has received awards in academics, medical excellence, television production and for the quality of his writing. He is a Clinical Professor of Medicine at UCSF and Professor of Poetry in the Fromm Institute at USF.

This interview will swing as it’s all about Watts’ San Francisco. A time of love, magic and eternal freedom. If you want to continue that good feeling, you may want to check out his latest book, “The Lucifer Connection.” I can guarantee you won’t want to put it down…

I came slam-bang up against a mid-life crisis about twenty years ago. Needed something to make it go away. I instinctively turned to writing (don’t know why), and even though the writing at first was pretty awful, it gave me answers, made me resilient. And, of course, gave me a new addiction.

I use history to embellish the stories.  For my book, The Lucifer Connection, I used San Francisco during the 1967 Summer of Love. I thought it would be an attractive city and an exciting time. I did my research, but my trump card was that I was here for that craziness.

What were the most influential moments in your life that inspired your book?

Everything about my life is material for my books, if not specifically, then by way of deepening general knowledge and experience. How could I know pain if I hadn’t experienced any? How sorrow? How longing? A writer has to resonate well to tell his/her story. You can’t say it all in words. There’s a lot that rides between the lines in the vaporous realm of the emotions. I’ve done a lot of things in my life: Music, Radio and Television hosting, Medicine, Poetry, Teaching. I’ve Loved and Lost. It all bleeds into my writing.

Can you tell us in your own words what Lucifer Connection is about?

It’s a Hero’s Journey. It’s about throwing some interesting characters into a mess and seeing how they come out of it. Or not.  You only know your characters by treating them badly. Otherwise, how can you be authentic when it comes to behavior, to personal strengths and weaknesses? That’s the exciting part. The grist. So my hero gets caught up in a web of murder and mayhem, and in order to protect himself, has to get into the thick of it. He’s out of his element, so he’s in constant danger. You have to read the book to see how he outsmarts his enemy.

What was San Francisco really like during that era?

It was F’kin Crazy. Wonderfully open and loving. What a time to be on the face of the earth and in the middle of music, dance, open loving, free concerts in the park, everyone passing out flowers and wine and other stuff. . . never will we see that again.

How long did it take you to write “The Lucifer Connection?”

Where did the inspiration for this book come from?

It’s a made thing. One August, I’d finished the projects on my desk and said to myself, if I’m ever going to write a novel, it has to be now. You see, I came up through poetry. I could do that between things at work. But a novel gets under your skin for months at a time. So I synthesized it. I picked what I thought to be the most attractive elements: A murder mystery, San Francisco, the Summer of Love, and some outrageous, quirky characters. I plopped them all together and threw darts at them.

I would go forward.

Are you planning a sequel?

The Future. Ah, this one is crazy. And it’s already done. I’ve combined some interesting characters, a dangerous situation and some speculations on how sexuality, politics and standard of living might change at the end of this century.

No. It’s how you learn stuff. Books aren’t going away.

So, you’re going to flush out the ego. Okay, I’ll bite. I truly believe I could tackle anything and eventually figure out how to do it. I think we all have that capability. But there is limited time in this life and one, sooner or later, has to make decision. I’ll stick to what’s working already: poetry, short stories, radio commentaries, essays (ugh) and novels.

More than average, less who peak. We have to have time to write.

I’m grateful. Mostly they get it. But you can’t review a good book and get everything said. The beauty of books is that they carry so much as layered meaning. The object of the writer is to push language so that it means more than it says. That’s why we play with metaphor, image, the music of the line. . . how that all comes together speaks to our unconscious as well as our conscious mind, and we come away having a better understanding of some of the mysteries of life. Well, that’s the object. It’s not just entertainment.

Jack Barnstone is an outside-the-box, motorcycle-riding physician who, finding himself in two kinds of trouble, leaves Texas to start a solo practice near Chinatown in San Francisco. When a patient walks in his office with an undiagnosed mortal illness, Barnstone’s life changes forever. Finding himself in deeper trouble than ever, he must work his way through a malpractice suit, the mistrust of his colleagues and the suspicions of the San Francisco police in order to vindicate himself. Since he has arrived in San Francisco just at the start of the Summer of Love to pursue his quest, he has to learn the inner workings of Hippie culture, the sinister workings of the Satanic Church while he is dodging the unpredictable actions of the San Francisco police. With help from his new Hippie girlfriend and an old, flagrantly gay East Indian assistant coroner, he discovers why the case was so difficult to solve, confronts the perpetrator and stumbles upon a well-hidden and sinister web of criminal activity.

You can download your copy of “The Lucifer Connection” today from Amazon. Don’t forget to watch out for the upcoming audiobook edition!