The Meandering Trail: What Every Cowboy Needs

Mike Trahan, pilot, father, and author, has been writing books for some years now. His series of memoirs has now been completed and has been on the market for some time now. The series’ success has been a mix of understanding his audience, knowing how to write without incurring boredom, and being able to relate exciting stories in literary form. This new interview has two purposes– those who already enjoy Mike’s writing will be enthralled to learn more about the man. Those who haven’t yet had the pleasure will have the opportunity to download three books that will keep them entertained over the summer. Everyone’s a winner when they read this interview…

Thank you for agreeing to this interview, Mike.

At first, I didn’t think my story was any different than most others, but I came to realize that it was unique in many ways.  My three-volume trilogy is about a flying career that spanned forty-five years and included experiences in general aviation, military (including combat) and airline flying.

“The Gift – The Beginning,” “The Gift -The Air Force Years,” and “The Gift – The Delta Years” are all about the airplanes I flew and the people I met along the way, many of whom became mentors to me.

I started this career at age fifteen, and I felt that my story would be important to write because it might inspire some other young people to go for this dream – if it were theirs, too.

Since these books are autobiographical, and I had first hand knowledge of the events and experiences depicted, I tried to stay close to the facts as I remembered them.  I verified things (dates, places, names) where I could.  Otherwise, I just recounted what I remembered.

I suppose all the flying movies I have watched repeatedly over the years had some influence on it.  They gave me an idea how to present my flying career in an interesting and enjoyable way. I wanted this to be a journey the reader took with me.

I think I have always been fascinated with good storytellers, and that’s all writers are.  So I hoped to become one of them someday.

Probably not.  Those things have been covered from every possible angle by historical authors.  I have nothing to add to what they have written.  Now, if it were an historical event that I took part in or was witness to, I might write about it from that perspective.  For example, by a quirk of fate, I was in Selma, Alabama the day that famous Civil Rights March took place. I wrote about that in “The Beginning.”

If you are referring to good and evil, then yes I believe both of those exist.  I think that is a concept we all should keep in mind all the time, and hopefully, always choose good over evil.

I think I would have liked to have been born in 1922 instead of 1942.  That way, I would have come of age at the beginning of World War II and could have become an Air Force pilot back then.  I always envied those great pilots who flew Mustangs, Corsairs, P-47s and all those other magnificent prop-driven fighters in that war.  WWII and Korea were the last two wars where air combat was more like jousting in the skies at close quarters.  With the advent of air-to-air missiles, air combat changed, and it was possible to shoot down an enemy aircraft without ever seeing it.

My books tell the story about a man who had a very ambitious dream, of a career in aviation, and that dream was realized in ways that were much greater than anticipated.

I am working on an outline for a book about growing up in the ’50s in my old home town.  I was fortunate to spend my high school days in the late fifties, and those were fun years in which to grow up.  I am thinking about the title “Our Happy Days – Growing up in Orange, Texas in the 1950s.”

Is that a trick question?  I think any author would love to have some big publishing house throwing seven figure book advance checks at him, and marketing his book in every book store in the world, but that is rare.  I am just happy I have found a publisher/publicist (Nick Wale of Novel Ideas) who has helped me publish my books independently and has helped me achieve good success in getting my books out there to the readers.

I believe the most informed people will always be avid readers – whether it be books, newspapers, or even blogs and social media on the internet.  Many readers read to escape their day-to-day world, and because of that, I don’t think the supply of readers will ever run out.

I won’t write a hit piece, a kiss and tell, or pornography. Basically, I would never write anything that would hurt anyone or that I wouldn’t want my grandchildren to see.  What kind of legacy would that be?

I think the good writers do.

They have responded to them very well.  I am happy to say that most reviews I have received have been Five Star Reviews.

Since there is probably no electricity on a secluded island, I would want plenty of pens and paper, so I could continue my writing.  Even if nothing was published while I was there, maybe someday someone would stumble across it and want to publish it.

You can download all of Mikes books by clicking the banner below. Enjoy! 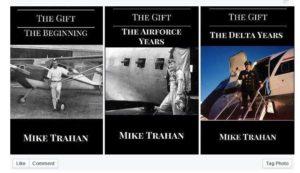