A Trilogy of Aviation: An Interview with Mike Trahan

Around The Campfire with Western Writing Raider W.M. Montague 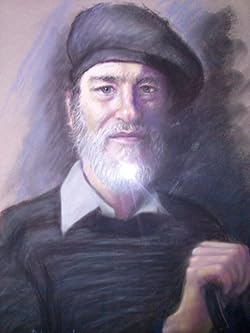 W.M. Montague is an enigma when it comes to the writing business. His original release was a seafaring tale of adventure, plunder and good deeds. It was called “Mr Bonner and the Amazing Adventures of Poseidon’s Charge.” After that success, he decided to turn his hand to writing the Westerns he so loved. Now he has a second Western coming out, and his first, “Treason on the Trail,” has been a major hit for the past few months.

This interview could very well help you decide your next Western adventure… Are you ready to take a short ride with W.M. Montague?

Mr Montague, what was your first experience of the Western genre?

As a child, I was given several Zane Grey novels, which were very popular in the late 1950s and early 1960s. Later, I became interested in the TV shows that were popular at the time, and I didn’t miss any of them. I tried to see every John Wayne movie—and the first one I saw? It was “The Alamo.” Surely the greatest of Wayne’s performances.

Why do you think John Wayne resonates with so many people?

Charisma. It’s the charisma. Wayne oozed charisma. He could take any story, any script, any character and give them the traits of, what my generation would call, the greatest Americans. A noble people, with principles, personality and the ability to think about others—not just themselves. Wayne was the mold for the American way in movie form.

Would you say the character of Dave Rose is based on the screen personality of John Wayne?

Yes, I would. Dave Rose is a man who wants what is best for his town. He doesn’t wait around for the government to give him a handout. He doesn’t want help. He just wants to do the right thing. When his son is held by the sheriff unjustly, he finds himself faced with a choice—he can save his son, he can save the town—or he can do both, and just like Wayne’s characters, he strives to do both.

Do you love country music?

I do. That reminds me of a story, actually. remember one time, my folks and I attended a Hank Snow concert. We bought an album, and Hank signed it for us. When we got home we found that we had actually purchased an Elvis Presley record. Needless to say the good folks at RCA Victor had to send us a new album, complete with a new autograph. That was back in the day when customers came first.

I think Westerns ARE the American way. Look at any good Western movie, book or folkhero. America, or at least the America I grew up in, is a place filled with decent, hardworking people. A place where your children can grow up safely in a society where people make use of their lives. Just like in the Western, there are rogues, vagabonds, and even bad men—but society doesn’t just sit around waiting for the government to solve these problems. Society acts. I don’t believe in others solving my problems. I solve my own problems, as do the Americans I know. A good Western is a true pictorial of the American way.

Where can we find your new book, “Treason on the Trail,” and will there be a sequel?

You can find it on Amazon worldwide. You will also be able to buy it at one of my book signings, and it will be available through my new website soon. There will be a sequel, and that sequel will be coming out in May 2016.

You can hit the trail with the first W.M. Montague western. It’s available now from Amazon. Ride on over, kick down the door and pick up a copy of “Treason on the Trail.” You won’t regret it! 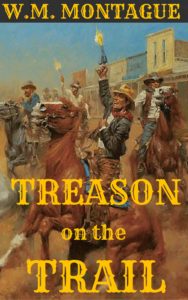