An Author For All Seasons: An Interview with Dennis Gager 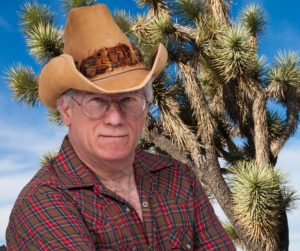 Frank F. Fiore has been one of the most interesting hit makers of 2016. His new book “Gunfight at Black Ridge” came out of nowhere and broke into the top 100. He has another on the way, and another, and another, and another. His next book will turn the western on its head and take the genre in a brand new direction. It’s called “Jonathan Smyth: Cowboy Sleuth,” and looks set to excite Western readers around the world… I think you’ll enjoy this interview with the mighty Frank F. Fiore!

Colson Rodgers returns from the Civil War to find that his home town of Black Ridge has been taken over by a ruthless gang of murderers. With the help of a few townsfolk, it’s down to Colson to either clean the town or get out of dodge.

Available as a paperback, a Kindle E-book and as an audiobook, Gunfight has been in the bestseller charts for several months, has achieved silver sales status within Outlaws Publishing, and has hit the top ten in both the Christian Westerns category and on the general Western bestseller charts.

Why was it important for you to write a Western?

How closely do Westerns mirror the American way of life?

They mirror the American individualist, frontier spirit that unfortunately is not reflected in the beliefs of most of our politicians today.  Case in point: Fifty years ago, we were a gun culture.  You would see kids drive to school with their rifle on a gun rack in the back of their pick-up and it was considered normal. Today, the sight of a gun throws people into catatonic fits.

Tell us a little about your forthcoming book, “Johnathan Smyth: Cowboy Sleuth?”

Well, the idea came to me some time ago. I have always been fascinated in myths and legends, and I wanted to write about the myths of the western and turn them into action adventures western tales with a twist. You’ll discover the twist when the book is released.

Tell us a little bit about your cover art for “Gunfight at Black Ridge.” Who designed it?

The cover for Gunfight at Black Ridge was designed by my publisher, Outlaws Publishing. He put together several ideas, and together we molded our ideas into the cover we currently have. We wanted it to be different—something that hadn’t been done on a Western cover before. That’s why we took the traditional image of a cowboy and added in what they would have called modern technology. It’s an homage to the changing West, the end of the war, the end of the frontier, and the beginning of modern America.

Colson Rogers – the protagonist. He’s a conflicted individual who stands up for what he believes to be right. His view of the world is black and white – not gray – and he acts on those beliefs.

How about your least favorite character?  What makes he or she less appealing to you?

The sheriff. He’s greedy and would sell out his own mother for a buck. He is both a coward and a turncoat, sunning the duties and responsibilities he was assigned with. He is the direct opposite of Rogers.

Give us an interesting fun fact or a few about your series.

Gunfight at Black Ridge is the first book in a series of Westerns that will concern Colson Rogers. There are homages to “The Shootist,” “Rio Bravo,” “True Grit” and other famous Western movies throughout the book. If you’ve read the book, and seen the movies, you may be able to pick them out. If you do pick them out—let us know, and you may win yourself a free copy of my next book.

Write. Write. Write. And don’t stop writing. Before my first Western, I have published 6 other novels and working now on my 7th.

You can pick up the first Fiore western today from Amazon. All you have to is click here, and ride, boldly ride your way to Amazon! 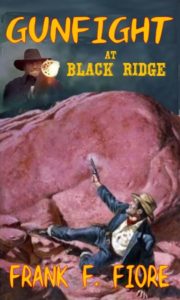