A Note About This Interview

Terry Pappas is one of the most interesting individuals to talk to. When this interview was first discussed, I knew that Terry had a huge reputation as a pilot and belonged to a select group of pilots who had flown the Blackbird. I knew he had written a great book about that plane, and I knew he had a style of talking that could hold one in the palm of his hand. I just wondered if that style could be transferred to the ink, or type, of an interview. This interview proves that it can be. You can hear Terry live on his upcoming appearance on the Carry on Harry talk show– and after you’ve read this interview, I believe you will certainly want to, and you will also realize that whether written or spoken, Terry has a style all of his own.

Terry spent 41 years flying aircraft, primarily for the USAF and NASA. His career started during the Vietnam era, conducting officer training while in college at the University of Florida, being commissioned there and attending AF pilot training at Reese AFB in Lubbock, Texas in 1971. After earning his wings, he became an instructor pilot in the T-38A, training USAF and foreign national pilots in that high performance aircraft.

He went on to fly numerous aircraft, in and out of the Air Force, to include the B-52G, while stationed at Blytheville AFB, Arkansas, ’81-’85. From there, he was selected to fly the mach 3 plus, SR-71, stationed at Beale AFB, California from ’85-’90. When the Blackbird ended its operational service of over two decades in 1990, he transferred to Edwards AFB, near Los Angeles, and served as an instructor pilot and flight examiner in the T-38A for the Air Force Flight Test Center, until he retired from the United States Air Force in 1994.

Terry flew Learjets with camera systems onboard, filming aerial scenes for the movie industry for a couple years. Then he accepted a position as a demonstration pilot for an aircraft manufacturer. There, he demonstrated new business jets to chief pilots and company presidents around the world. He flew for a privately held business in Las Vegas, Nevada for two years before accepting a position as an Aerospace Engineer and Research Pilot with NASA in 1998. There his duties included: T-38 Project Pilot, IP for astronauts in T-38, Gulfstream I, II and III executive transport, Super Guppy transport for outsize cargo, and DC-9 for micro-gravity research flights. He also managed a number of training functions for Aircraft Operations Division. He has over 10,000 flying hours, most of which are hour-long flights, with numerous instrument approaches and landings.

Terry retired from NASA in Oct 2011. He spends most of his time now pursuing writing and speaking projects. Terry’s hobbies include golf and photography. He lives in Houston, Texas.

Astronaut Walt Cunningham talks about this book: “Higher, farther, faster – what every real aviator aspires to. The SR-71 was the epitome of this dream for three decades. The only way to beat the SR-71 was to rocket into space, and every astronaut in the office with me in the 1960s would have loved to have flown the Blackbird. In many ways, it placed greater demand on piloting proficiency than any spacecraft. Terry’s book answers all those questions you ever had about the wonderful challenge of controlling an airplane, flying at 80,000 feet and more than three times the speed of sound for hours at a time.” -Walt Cunningham, Apollo 7 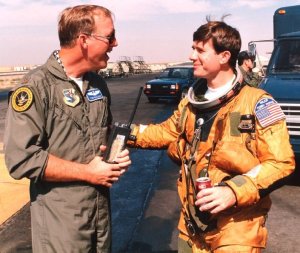 When it comes to writing a book about your own past—what do you really want to tell the reader? Are you looking to entertain or educate?

I wrote my book to educate readers about the SR-71. I’ve been told that many readers found it entertaining as well.

What did you learn from writing your book?

I learned a lot from M/Gen Pat Halloran’s ‘Foreword’ that he wrote for this book. Since General Halloran was among the initial cadre of U-2 and SR-71 pilots, he has a very unusual perspective on U.S.’s earliest high altitude manned reconnaissance aircraft. I didn’t realize that the early U-2 aircraft didn’t even have an ejection seat!

Do you think people can identify with you?

I think many readers can identify with a number of experiences that I touch on in the book. Many military personnel have been assigned overseas and have risked their lives on a regular basis in order to accomplish their missions. This often evolves into a ‘work hard and play hard’ mentality. You never know when it’ll be your last day on earth, so you tend to make the most of it. We partied hard when we were overseas flying combat missions.

Can you tell us your favorite memory from your flying career?

My favorite memory from my flying career surrounds the extremely long (11.2 hours) and challenging mission that John Manzi and I flew in the Blackbird in August of 1987. It required five aerial refuelings, each of which was stretched to 500 miles in length, so we wouldn’t need a sixth refueling. Our target area was the Persian Gulf during the Iran-Iraq war. We launched out of our Forward Operating Location at Kadena Air Base at Okinawa, Japan. The weather was the most difficult I’ve ever faced during my Air Force career. It required me to stay in close formation with the tanker aircraft for extended periods of time. Of the five hours that we spent in the air refueling tracks, I had to maintain the ‘close contact’ position (12 feet from the tanker) for a total of three and a half hours. In my book, I go into detail about the challenges and close calls that this mission entailed. These challenges include operational as well as physiological issues.

If you had one passion—what is that passion and how did you discover it?

I played sports continuously since I was a young boy. I sometimes played two sports at once, going from track practice to baseball practice daily for weeks. The only sport I didn’t find the time for was golf, until eight years ago. Now, I play golf daily. And I practice daily too. I think you could say that I’m passionate about golf.

When did you realize that you were a storyteller, and how long after that did you pick up a pen?

As the Blackbird program was winding down in 1990, I was approached by two photographer/writers who asked me to write a chapter for their new book about the SR-71. I decided to give it a try. I discovered two things. One, I didn’t know how to write. Two, I loved it. I could sit for 10 hours at my computer writing. I’d never been able to sit still for anything lasting that long. So, I began the never-ending process to educate myself about the writing craft, and I later attended a weekly workshop for advanced writers in Los Angeles for two years.

Why would the average aviation fan enjoy your book?

Though my book deals with the fastest aircraft ever built, and the details of what it was like to fly it, I also cover many day-to-day activities that surrounded our lives, particularly when we were overseas in Great Britain and Okinawa, Japan, as well as our activities while back at Beale AFB in northern California when we were home in between operational deployments overseas.

Are there more books in the wings?

I have assembled some ideas concerning a techno-thriller fiction book, based on my military aviation experience.

You can learn more about me by visiting my website and by checking out my book, “SR-71, The Blackbird, Q&A” on Amazon. It’s available in paperback and as an eBook there. I currently autograph every one of the paperback books.

Thank you for your time, Terry.

You can get your copy of “SR-71, The Blackbird, Q&A” by clicking here. I sincerely hope you enjoyed the interview. All profit from this book will go to charity. 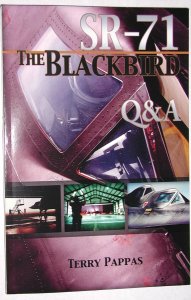