The name is Rick Jantz, and he’s a new writer on the block. He writes Westerns and his first book, “Colson’s Law,” is the stuff that movies are made from. This first interview with Rick should tell you that he is eloquent, interesting and devoted to his craft. When Rick asked me to interview him, I knew it would be a great interview. All I can say before you read this is… I told you it would be good.

1. Quickly, give us the title and genre of your book and a short tagline:

The title of my first Western novel is, “Colson’s Law.”  A shamed gunfighter must give up his whiskey bottle and return West to help a young heiress claim her ranch.

2. Who is your intended audience, and why should they read your book?

This book is intended for anyone who likes great Western novels, primarily men of all ages.  The book is action-packed with gunfights, brawls, and mystery as a mysterious force attempts to sway Wyoming politics in their favor through violence and murder.

3. How did you come up with the title of your book?

The title shows one man’s determination to use his six-gun law to bring justice to the frontier.

The cover was designed by JH Illustration.  I had researched different cover designers, and the work that Jeanine Henning had done was simply outstanding.  Fortunately, she posts some of her work on her website, so I could see that she knew what she was doing. After initial discussions with her, I contracted her to do my cover.

5. Who is your favorite character from your book and why?

My favorite character is the main one, Rad Colson.  He’s a man who learns to rise above his alcohol addiction and chose to fight for that which he knows to be right.  Once he decides to do so, the reader quickly realizes that he also has the physical ability to fight those who would impose their will on an untamed land.  He is also a man who knows how to treat others that deserve it with respect, and he is someone who wants to love and be loved.

6. How about your least favorite character?  What makes them less appealing to you?

One of the antagonists, obviously.  She’s manipulative and not afraid to use treachery and murder to get what she wants.

7. If you could change ONE thing about your novel, what would it be?  Why?

I would spend more time with the Vic Ranch, the largest ranch in Wyoming Territory.  I would want to give the reader more time and insight into the workings and beauty of a great ranch back in the late 1800s.  Ranches were difficult enterprises back then, and there were many that were not nearly as successful.  I would like to spend more time exploring how it became successful and the impact that it had on the frontier.

8. Give us an interesting fun fact or a few about your book:

The story occurs just before Wyoming was to become a state within the Union in 1890.  This enabled the story to include power struggles for fictional characters to set themselves up as powerful leaders.

Women were not always ladies back in the old West.  In fact, they could become nasty and be just as willing as men to kill for gain.

Colt .44s are not light guns. They could weigh as much as 5 pounds, which could make it difficult to get out of the holster as fast as the main character does.

9. What other books are similar to your own?  What makes them alike?

The plot and writing are similar to Louis L’Amour, one of the greatest Western writers of all time.  Our stories are about tough men who are fast with a gun, know how to live off the land, and want love and marriage to a woman who is as strong or stronger than they themselves are.

10. Do you have any unique talents or hobbies?

Besides writing, I like to act and do comedy.  I’ve had a very successful stand-up comedy character that was able to ad lib onstage and keep people laughing.  Interestingly enough, he’s an old mountain man who doesn’t understand modern society but puts his own simple spin on life.

11. How can we contact you or find out more about your books?

I can be contacted via my author website: rickjantzwriter.com.  I post about my books and the craft of writing.

12. What can we expect from you in the future?

I am now working on my next Western, which I plan to turn into a series.  It’s called “Six-Gun Twins” and is about twins who are equally fast with their six-guns.  The tagline is: “2 Men – 4 Guns.”  Doesn’t that just whet your appetite?

13. What can readers who enjoy your book do to help make it successful?

I would love to hear that readers enjoyed the book and leave me a review on Amazon.  They also need to let others who like Westerns know that there is a new writer on the scene, and they need to share the book with them.

14. Do you have any tips for readers or advice for other writers trying to get published?

Don’t give up on your dream to become published.  There are so many more opportunities for writers nowadays, whether they want to go with traditional publishers or self-publishing.  This places writers in control and will let them develop their craft based on readership engagement and purchases.  I would also strongly advise that they get their book covers professionally designed because mine has received so many compliments and really jumps out at you.  Also learn how to self-promote and even hire a book promoter. It’s money well-spent.

I’m very pleased to finally offer my book to the public.  I wrote it 25 years ago, and then family and career stopped me from pursuing my dreams of writing until now.  Those were things I chose to focus on, but now it’s back to my passion for writing.  The response to my first book so far has been incredible and ensures that there will be another book forthcoming.

16. And now, before you go, how about a snippet from your book that is meant to intrigue and tantalize us:

Here’s an excerpt about Rad Colson’s speed with his guns:

“Everybody on the Laramie street saw what happened that day and they would tell it to their children and their grandchildren.  They saw Ed Nelson’s gun begin to come out of its holster before his intended victim had even touched his.  But when he did, Lord, how he touched it!

No one even saw Rad’s hands move as they swept down and up with the twin .44s spitting death at the man a short distance away.  The first thought their minds were able to register in that millisecond was that two slugs tore simultaneously into Ed Nelson’s puny body.  They would later see that both bullets had entered the heart of their victim, within a coin’s width of each other.” 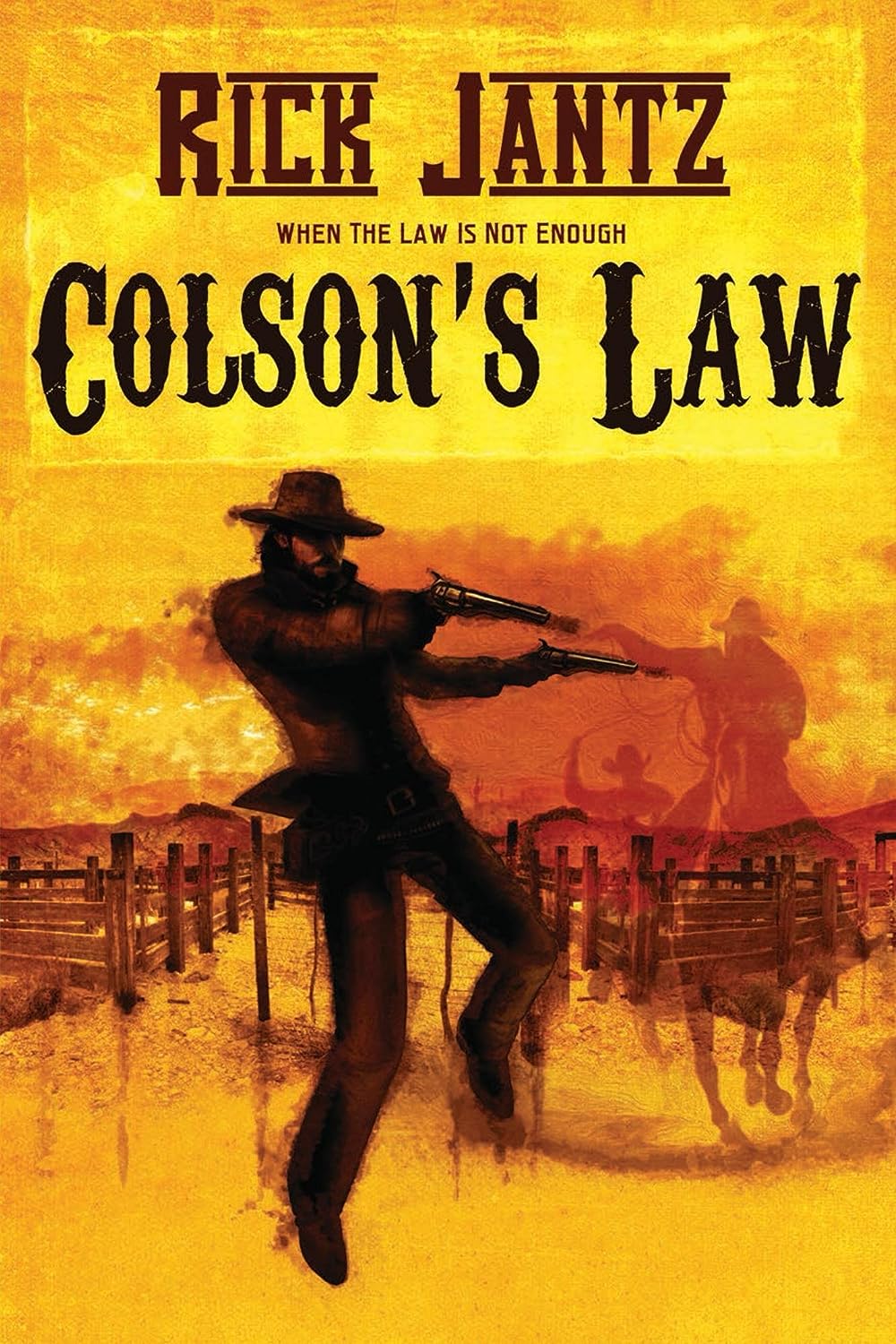 Get your copy of Colson’s Law today