Tomorrow? How About Susannah Cord Today!

Rebecca McLendon is a new writer, but this new writer title has a twist. She has years of experience with words. As a teacher she taught the written word, and as a retiree she has dedicated her time to learning to fly and writing a book. That book is called “The Day I Grew Wings: Journey of a Soul With A Destiny.”

What’s this new book about?

It’s about learning to fly!

“It all began when we decided to get an airplane. I looked forward to riding with my husband over the countryside and enjoying the scenery. But one day he dropped the bomb. He told me I would need to learn to fly the plane, because, should something happen to him up there, I would have to put it on the ground. I began waking up at night silently screaming because I felt I was flying out of control up there with no way of getting the plane down. We ordered the Ground School materials, and thus the journey began. I had overcome cancer. I could do this too. My new song became, “I believe I can fly.” As instruction continued, and the hours added up, I suddenly realized I was a pilot.”

Let’s see what Rebecca has to say about her experiences as a writer! 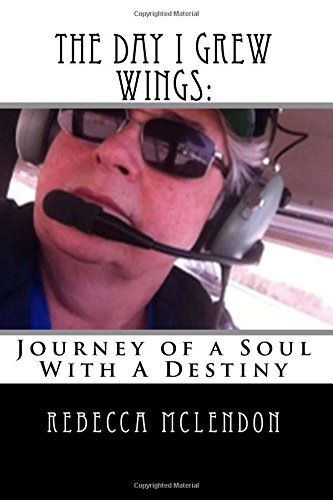 Good morning, Rebecca. What inspired you to write your first book?

Hi there. I began this book as a blog on the Internet.  Friends began contacting me and telling me it should be a book, so I set it up on my computer and began the book.

There are always exciting opportunities and challenges in life no matter your age.  Carpe Diem!  Seize the day and make it count!

How much of the book is realistic?

My book is ALL realistic!  I write what I have lived and what I am currently living.

I have two.  John L Moore has inspired me with his own novels and life.  He has also been my chief motivator to finish what I start!  My other mentor would be Richard Bach who taught me how to write about flying and making it a powerful and realistic experience for the reader.

What books are you reading now?

“Looking for Lynne” by John L Moore and “The River Caught Sunlight” by Katie Andraski.  Both have written fiction novels based on real life experiences, which is a project I hope to entertain in the near future.

Are there any new authors who have grasped your interest?

Mike Trahan, pilot-author of “The Gift” series, Books 1, 2, and 3; and Katie Andraski, “The River Caught Sunlight.”

I have currently drafted the first four chapters of my second book.  Of course there is no title yet!  That has to come via inspiration from a surprise source.  However, if I write it, it will come.

Name one entity that you feel supported you outside of family members.

All the citizens of the Pilot Nation have surrounded me with a common love for flying and a spirit that encourages one another no matter the smallness or the magnitude of an accomplishment.

I would include a couple or three pictures in significant places, but I do prefer to paint the pictures with words.  No need for pictures if the words say it all.

I began “writing” as a pre-schooler by  first asking my mother or grandmother to draw my stories out on my large chalkboard.  I then began drawing my own storyboards  and “telling” my stories as I drew…as soon as I could write well, I wrote my first “book” at age 8 about an ill-fated duck hunt and then a lengthy document (65 pages in pencil on lined paper) about a trip out west at age 11 during math class each day.

Can you share a little of your current work with us?

Listen to your gut in your daily decisions.  Avoid the common pilot trap: confirmation bias, where you seek the advice of others around you and attempt to formulate your decision about going or staying based on what they think or what they say they’d do. A pilot must make decisions DECISIVELY.  Period.  Even if the whole aviation world chides you to go on!

On another occasion, Tom and I planned to fly 19 minutes north of Crockett to fuel the plane for my lesson.  I had opted for an early morning lesson to beat this horrible triple digit weather. Remember, most small aircraft are not air conditioned, so I was learning to fly with my window open.  Tom called and told me to get some water and a snack and meet him at the airport.  I had seen the cumulus clouds building up taller and taller earlier that afternoon, but as I drove out I could see they were rapidly building up into a thunderstorm.  VFR pilots do not fly in or near a thunderstorm.  Tom called while I was en route to report weather build up where he was driving from.  I told him I was already “on it.” I arrived at the hangar and told our aviation friends and experts we were about to have a weather conference.

Surprise drove us to our computers and phone apps to start monitoring the system.  So far the route we were heading was “clear,” but after a few minutes, I saw a small green blob moving across the radar, and my thought was, “Sure, it’s clear for now, but that thing is moving such that it will cut right across our path on our return!”

“We aren’t going anywhere,” I said.

John, emerged from the dark, cluttered “office” of his hangar and jokingly flapped his chicken wings. “Prawwk prawwwk….!”

The phrase came to me:  “’Tis better to squawk than croak.”  I meant it, so I said it.  And he, being a seasoned aviator and instructor himself, grinned, I am sure, thinking, “The little woman does have a brain.”

We reluctantly made the final call to scrub the flight after monitoring and watching a huge lightning filled hail storm pass right over our intended flight path.  The whole area was under a Convective SIGMET, which is a relatively short-lived system of thunderstorms that last about an hour from start (the cumulus stage like I saw outside my bedroom window and increased rapidly in size as I drove to the airport) to finish (downdraft stage).  These are to be avoided.  Don’t expect all to go as planned.

We scrubbed the flight.  We would just get up very early, do our preflight, and run up there to get our fuel.  All went well, with the exception of an aborted initial landing attempt.  The runway view showed we were entirely too high to land.  We “went around,” which is terminology for aborting the landing and reentering the pattern for a second attempt.  ‘Tis better to be cautious, even if others are goading you to “aww go on, you’ll do fine.” ‘Tis better to squawk down here than it is to croak up there.

I find balancing the busy-ness of everyday living with setting aside definite time to write extremely challenging.  Many think I just “play at the computer all day” not realizing I am writing OR editing someone else’s writing.  It’s also really hard to attend to ironing or cooking or mopping when inspiration is screaming to be expressed!

Do you have to travel much concerning your book(s)?

Actually, until recently I have done all there is to do about my books via the Internet.  It’s amazing to be able to send documents, edit documents and manage promotions, sales, etc. from your desk. I went to a friend and fellow pilot’s hometown to join in a book signing event, which would constitute traveling.

The photo on my book was actually my first “Pilot selfie”….

I found wrapping it up the hardest part.  Events kept happening, and I kept wanting to “add a chapter.”  A friend and fellow writer finally said “BECK!!  Finish the book!!”  That jarred me out of “scope creep” where I was about to take a project and keep adding to it and spreading it out into infinity.

Everyone has a story!  WRITE it.  And if you cannot write it physically, record it for someone to transcribe!  Writers, especially biographical/autobiographical writers are actually historians.  But all writing contributes to a society’s history, simply because it reflects the heartbeat of its people.

What were the challenges (research, literary, psychological, and logistical) in bringing it to life?

My greatest challenge has been “putting myself out there.”  To write autobiographically is doing just that.  You must be willing to have your very life and character read by the entire world.

How long did it take you to publish your first book, after you started trying?

On the average, anything I write in book form I expect to take eighteen months to two years.  Simply because I do not have hours and hours to stay at it daily.

My personal experiences ARE my writing.

What genre of books do you like to read? Do you limit yourself to only the genre that you write yourself?

I love good, wholesome fiction with a finely tuned plot woven with sub-plots that engage my MIND.  I like it to be credible and substantiated with truth.  I also love personal experience stories of people with common interests, adventure writers, journals.

Were you always good at writing?

Yes, expressing myself in words has never been a problem.

What advice would you give to people who “run out of creativity” when writing?

Take a break.  Take a walk.  Look at God’s creation.  Listen to good music.  Doodle on a drawing pad.  I started a story once drawing stars all over the paper.  Another with “I don’t know what to write.”  Another with a Haiku poem.

Who are your target readers?

People of all ages who have a dream to do something.  To step out of their comfort zone to fulfil that dream, even if it is in their imagination. (That’s the beauty of fiction.  And that is the beauty of the fiction piece I am “entertaining” in my mind.  I may never do it in real life…but my character WILL.)

Overcoming fear.  Mastering a goal.  Believing in yourself and trusting in God for all things.

What do you think people search for in a book?

In this world full of violence and darkness, I think, bottom line, people look for something that will actually turn out well.  Something that lifts us above the things that create great angst in our being.

What do you consider to be your most valuable accomplishment?

Raising and educating three children with my husband.  I also value the thousands of souls I have been in touch with through teaching in public schools.  It was worth it all.  I pray my writing expresses that.