Why did you want to write a book?

I wanted to write a book ever since I was a kid. I loved when my teachers would give us creative writing assignments in school. I’d always go way over the minimum length. I thought it would be cool to write an entire book one day. Also, I always loved to read and felt very moved by many of the books I read. I wanted to write something that would move people as well. Between Boyfriends is an attempt to make people laugh , but also to get them to re-evaluate what makes them happy and how much of what they do is really for someone else. I also hoped that people would be more compassionate to teens and young adults who use a bad attitude to mask deep feelings of insecurity and unworthiness. These negative self-images are more prevalent than people think, and I believe that in a person’s early 20s is their best chance to let go of those false beliefs and become a happier person.

What makes you a great writer?

I don’t know that I am a great writer, but I know that some of the things that many writers struggle with, such as humour and dialogue, are things I write well. I may not be the best at foreshadowing or imagery, but when it comes to creating rich characters with believable motivations, that’s what I’m good at. Allowing for personal development in a slow, realistic fashion while keeping the reader entertained is where I excel.

What is inspirational to you?

Other books inspire me, especially ones with spiritual or compassionate messages sprinkled within an entertaining narrative. That inspires me to try harder and to write more. I take inspiration from people around me but not just my friends. I respect privacy, but I am be a but nosy and if I witness an interesting exchange between people or overhear something juicy, I may use it in a book.

How did you approach writing?

Between Boyfriends was written in a rather haphazard way. I got the idea in my junior year of college and wanted nothing more than to stop everything else in my life and write. Unfortunately, I was paying for college myself, which meant working 30+ hours a week while attending classes full-time. I worked summers too, generally with two jobs. So, I wrote whenever I could, an d I didn’t have time to create an outline. It was mostly sit and type and hope whatever came out wasn’t awful. This is how I wrote the book over the course of three years. Suffice it to say, it wasn’t brilliant. I did a major rewrites and several smaller ones based on feedback from agents and friends. I never really had time for anything structured. It worked out though. I tried to use an outline for the second book and went completely off course. I learned that I’m not an outline writer. I write as it comes.

What do you think a great book needs?

A great publicist. Just kidding. Sort of. The problem with defining something as a great book is you usually have to get enough people to agree that a good book is really a great one. I think there are a lot of great books out there that haven’t gotten the promotion from good to great but could someday if it resurfaces. So, I’d say for a great book you need a good book that is memorable enough and lucky enough to get people championing it. I think you need all the right elements, an interesting plot, interesting characters, and some truth people can take away from the story. I’d argue that the characters don’t even have to be relate-able as long as they are interesting and consistent.

How do you feel about the independent writing world?

I’m a big fan and think we all need to support indie authors and publishers, and not just because I went from self-published to indie published. Traditional publishing houses aren’t willing to take risks any more, which means that a lot of great voices aren’t being heard. On the flip side, a lack of gatekeepers means books held to lower standards are out there. I run a boutique PR firm for authors when I’m not writing, and one of my requirements for taking on a new client is that their book must be professionally edited. I know it is expensive, but the lack of good editing is a main reason why people, some people, look down on indie authors. That could change if more authors invested in professional editing, proofreading ,and design services.

Do you believe a book needs promotion to succeed?

I think in 99% of cases, yes. You might see a rare book that gets released at just the right time and falls into the hands of just the right people who tell their friends, who tell their friends, and so on, and a book succeeds without any real promotion. But that is so rare. I resisted the idea of having to promote my work for a long time. I adopted the naïve belief that as an artist I shouldn’t have to bother with promotion, just put out a quality product. Years later, I became a publicist. You eventually realize that there are more books out there than readers could possibly keep up with, so you need promotion to stand out.

Who are your favourite authors?

What attracts you to a book?

Pheromones? Oh my God, there’s a marketing idea I bet that’s never been tried. I always read the description and a couple of pages to see if I like the writer’s style. Usually I read women’s fiction and fantasy. If it’s a women’s fiction book, I better be laughing within the first few pages or I’m not interested. For fantasy, I usually look for a style I can immediately understand. I find some fantasy tries so hard to be creative that you have to work really hard just to understand what is going on. I’d rather know that there’s a great storyline from the description and then relate instantly to the protagonist than struggle to figure out an entire new world before I can enjoy the book.

A drop of rain falls from the sky—what do you think?

“Wow.” We don’t get a lot of rain in San Diego, so unless I’m about to drive to LA I often take a moment to enjoy the sight and feel of raindrops.

How does a cloudy day make you feel? Sometimes sad and sometimes relaxed. I think that if I’m in a good mood, a cloudy day seems like a great excuse to curl up with a book and drink hot tea, but if I’m tired or stressed a cloudy day can be depressing.

What does a bar of chocolate taste like to you?

Heaven. I love chocolate, especially sweet, dark chocolate. Bitter chocolate makes me sad. I think, “Just a little more sweetener and this could have been divine.”

How do you define your book by genre?

My book is very easily defined as chick lit. Chick lit is known for being light, funny, and appealing to women. It usually contains a romantic element, but isn’t a romance. It deals with a woman going through a change in her life and usually involves help from friends. I love chick lit because it’s told in a fun way but can still deal with issues like divorce, career changes, death, and growing up. My book is a little different from most chick lit in that the protagonist has some issues that make her unlikeable in some ways, but I wanted to write a book for most women in their 20s who do have some issues their figuring out and who aren’t perfect and sweet and lovable all the time.

How does blog touring make you feel?

It’s a lot of fun. It reminds me of when I first started getting my freelance articles published online and I could pop over to a bunch of sites and see my byline. Knowing that so many blogs are helping to showcase my novel is wonderful and makes me feel, more than anything, extremely grateful.

How many times have you rewritten a line to try and get the right feel for it?

I don’t often rewrite lines multiple times, but occasionally there is one that I wish would just write itself. I’ll rewrite a line a dozen times if I have to, and sometimes I’ve had to do that to create the exact feel I wanted.

Do you like to write with music? Does that help you concentrate?

I’ve tried it and I know it works for some people, but I really love music I can dance to and will tend to get up and start dancing and singing along, which doesn’t help my writing much. I do like to take dance breaks though during long writing sessions. It helps me recharge.

Do you feel the writing world is full of negativity or positivity?

I’m not sure that I completely understand the question, but the authors I associate with are all positive, supportive people. I’ve spoken with a lot of nice literary agents and publishing people. There are certainly a lot of mean people out there who seem to be independently wealthy because they sure spend a lot of time looking for new books to rip apart in reviews. It makes me really sad when people aren’t constructive in their criticism, but I know that has nothing to do with me or my work and everything to do with someone’s own issues.

Does promotion make you excited or scared?

What are your expectations as a writer?

I expect to keep working my butt off until I can earn a comfortable living off my work.

Do you feel comfortable interviewing?

Absolutely. Though so far I’ve only been interviewed for blogs, newspapers, and informally on the radio. I’m terrified of a live TV interview. I’d do it though.

What is the worst thing you’ve ever read?

Well, there was this 1-star review of my book… But I don’t think that’s what you mean. If I could think of the worst book I’ve ever read I wouldn’t say what it is.

Do you find it easy to concentrate on a book?

Definitely. Writing or reading books draws me in and unless there’s an awesome dance track on it is hard to distract me. Food can sometimes do it though.

What are your hobbies outside of writing?

I study kung fu and qigong. I take my training very seriously, so it’s hard to say it’s a hobby but technically it is. I used to do a lot of yoga. I hope to get back to that soon. I do flash mobs sometimes. I used to ride horses, but when my mare got too old to be ridden and then passed away last year I stopped. I wasn’t very good at it anyway, but I’m sure I’ll take it up again someday.

Book: Romance (I think that’s just because of the word before) 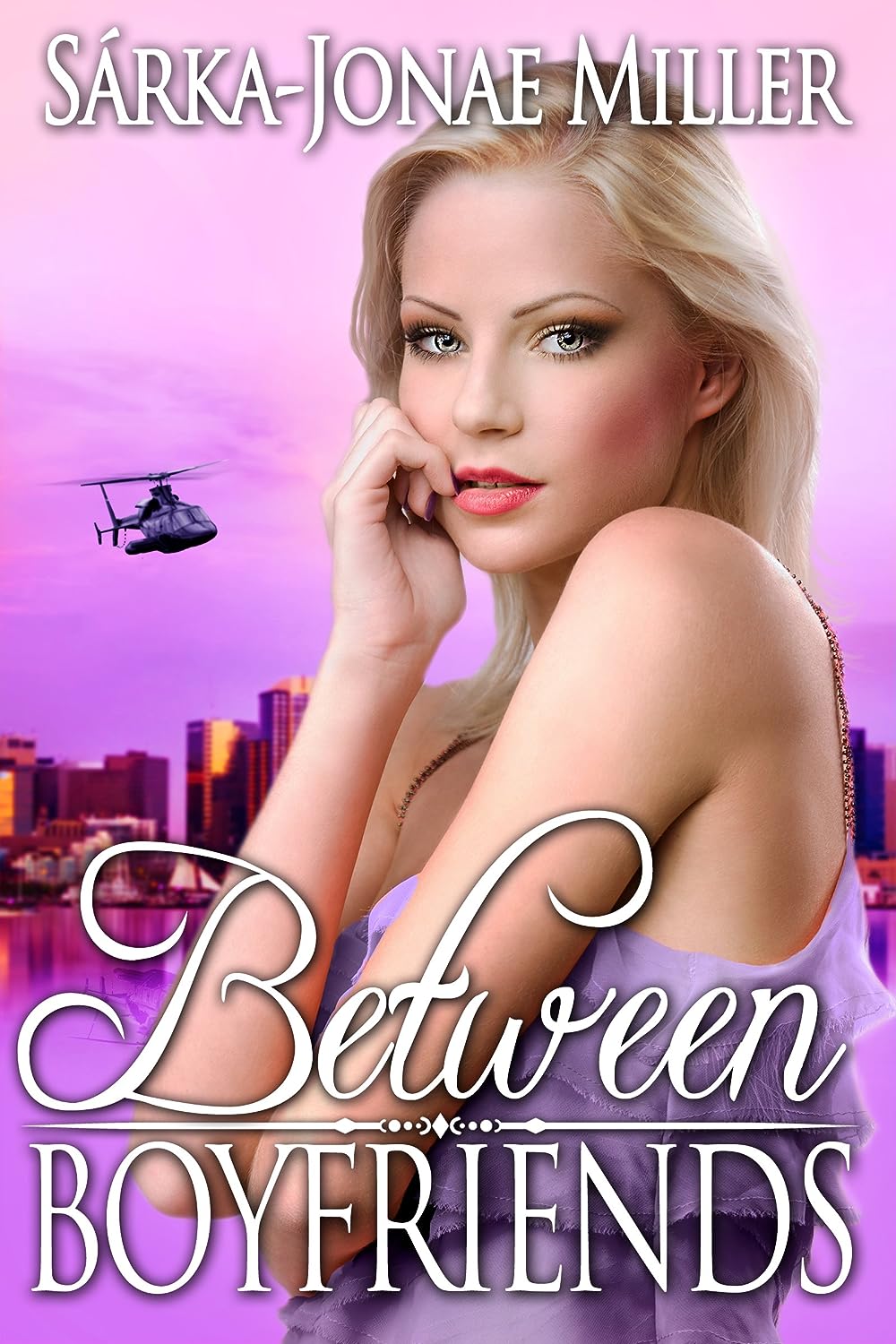 Get your copy of “Between Boyfriends” today!