I have a real treat for you, today! A full interview with bestseller Cliff Roberts and rising star Charlie Flowers. What do these two guys have in common? Well, Cliff rose to fame after the release of his novel Reprisal: The Eagle Rises, and Charlie? Well, Charlie just got the Novel Ideas “book of the year award” for his fantastic spy thriller Hard Kill.

Charlie is currently in the process of making a movie out of Hard Kill, and Cliff has turned down one offer in the hope of a better deal in the future. It’s a wonderful time to be a writer.

So, what do these two immensely popular writers do to make their books stand out? Let’s find out…

Nick: Hey, guys, great to get you both together for an interview.

Cliff: Hi! Thanks, it’s a pleasure to be here!

Nick: Okay, so let me start by asking you, Charlie, how do you feel about writing? How did you approach the idea of writing a book?

Charlie: Blimey that’s a toughie! For me, I don’t think I DO think about it. It’s almost like an “automatic writing” process. Sometimes, I’ll get a strong image in my head and feel compelled to write about it. An example– the abandoned airfield in the second Riz novel. I was haunted by the image. In fact, I even drove up there to take a look at the base. It’s… creepy.

Nick: Cliff, let me ask, do you ever “live” your writing? Do you ever have images you just have to discover and create like Charlie?

Cliff: Oh yes. I think of my stories as if they were movies. I think how the actors would behave on the film and then try to write so the reader will see the same thing. That way the reader is drawn through the book from scene to scene.

Nick: Charlie, when you write, do you write as though you are writing a film?

Charlie: Yes, I do, and my editor doesn’t seem to like the amount of BANGWHOOSHTHUDs I put in. She keeps taking all the sound effects out. And the swearing, but that’s another story

Nick: How does your new editor feel about your work, Cliff?

Cliff: I’m sure she pulls her hair trying to figure out what it is I’m trying to say. I tend to leave words out of sentences because my mind works far faster than my fingers do. I think for the most part she enjoys the story, and with her help, I can actually present to the public a readable book that they will enjoy, too.

Nick: Charlie, let me ask you, how have people taken to your book so far?

Charlie: People have formed a cult following, mainly among women, which was a surprise to me. Maybe they like the romance sub-plot. Reviews have been positive, apart from one lady who thought all the nicknames were “silly.”

Nick: Cliff, how have the reviews been for you?

Cliff: Not so bad. I enjoy the feedback; and I have to say, the reviews drove me to hire a new editor!

Nick: Charlie, how do you handle the haters?

Nick: I have indeed! You have a really strong fan base, Charlie. Cliff, what’s your new book “Nevwas’s Gold” about?

Cliff: It’s not your usual detective story. It about a hack writer who keeps stumbling into crimes and has to solve them in order to save himself. He’s old, fat, handicapped, and sassy as hell, has a heart of gold and uses deception to take on young stronger, faster bad guys who just look at him as an old fat guy. If you read my new book, at the end you’ll really only have one thing to say–I want to be like Nate.

Nick: Cliff, that sounds like a great read! So, Charlie, what comes after “Hard Kill”?

Charlie: The fourth and fifth in the Riz series. Riz 4 is BARRIO ENDS, where the gang get sent in to rescue some hostages in a Tottenham riot. The wheels come off. And Riz 5, MURDER MOST RURAL, is your classic English village murder mystery! After that, I intend to write a factual book about Ford Britain.

Nick: On that note, Cliff, any non-fiction coming from you?

Cliff: Well, I have a quote book out currently titled “What the Writer Said.” It’s got a lot of meaningful quotes by the great and near-great, like me. It’s available on Kindle and Createspace. It’s a great reference tool and inspirational read for those authors–or anyone for that matter–who needs a little something to get them motivated again. Plus, I have several more quote books in the works including  “What the Writer Said #2.” The writers just keep coming up with more quotes.

Nick: Charlie, how would you feel about writing a book with Cliff? I think that would be one helluva tale.

Charlie: We could meet half way. I could lend him Bang-Bang. She’s semi-house-trained and doesn’t bite, too much.

Cliff: Nate is always looking for some to help and someone to harass at the same time.

Nick: I think Nate and Bang-Bang would have a great time together. So, Rocky, how’s the movie going?

Nick: Cliff, I guess you have seen “Reprisal” as a film. Any offers from the studios yet?

Cliff: No serious offers, but then I haven’t tried shopping it. I think it would make a great blockbuster film–lots of action and tons of intrigue.

Nick: Charlie, do you believe your non-fiction work will be as well received as “Hard Kill” or do you believe the Riz series will be considered your best work by future readers?

Charlie: Oh blimey, I don’t know! I’m doing the Ford book as I and many of my family worked there, and also because it’ll have niche appeal. There’s a wealth of stories from the Ford workers of the 70s and 80s. So we shall see! 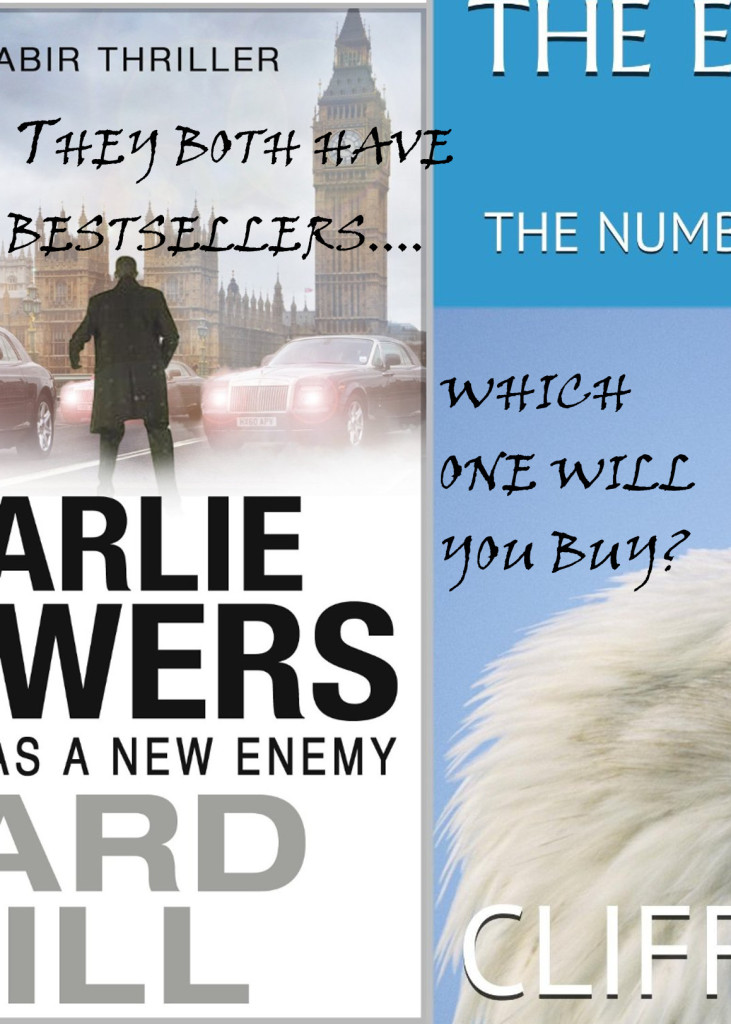 DON’T FORGET TO PICK UP YOUR COPY OF “HARD KILL” BY CHARLIE FLOWERS… YOU WOULD BE FOOLISH TO MISS OUT! ON THE MOST EXCITING NOVEL SOON-TO-BE MOVIE OF RECENT TIMES.