The Truth About Vietnam

Covert The Not Known is the story of men at war; it is about the things men do in war and the things war does to them. Restless, filled with dreams of adventure, seeking more of life than a suburban existence, Jerry Nedwick set out to prove himself as countless generations have done: by going to war. His war lay in the jungles of Vietnam.

After you read the interview, go and read the book “Covert The Not Known.” It will really tell you what happened in Vietnam. Between Connie’s answers you will find the words of Jerry…

Q) Thank you for agreeing to this interview, Connie. Let me start by asking you this—how did you meet Jerry?

A) Hi, Nick. A mutual friend introduced Jerry and I at a party, and we were together from that point on. It was love at first sight, we married six weeks later, and that marriage lasted for forty-two years when he passed.

I made this writing in defiance of a Secret Clearance as a Covert Recon Marine after maintaining that pledge for over 40 years. I do so to inform the public of the realities we face to combat the Evil that knows no rules or no deeds too grotesque.

Q) So, how did you feel when you found out Jerry was writing a book?

A) I was very surprised that Jerry was writing a book. He hardly ever read books, so I could not wait to read what he was going to write. The only things I ever saw him read were gun magazines, health books and the entire set of the encyclopaedia. He had started writing another book after “Covert” but only completed a few pages before he passed away. What a story teller to have never read novels himself.

After several years and much deliberation about my participation in the Vietnam War, I decided to write down my experiences and memories that happened over 43 years ago. The events, places and names are as accurate as 43 years of lapsed time allows. What you read is based on a great deal offact, but it is upon the reader to determine fact from fiction.

Q) For a man who hardly read “Covert The Not Known” is an impressive book. What did you think of it when you first read it?

A) When I first read Jerry’s book, I was shocked. I did not know he had gone through everything he put down on paper. His writing brought to light a lot of things about Jerry I had always wondered about. I think I discussed some of those in our first interview. His nightmares, the sometimes changing of bedrooms because he was afraid he would hurt me, his getting up in the middle of the night to patrol our property, his always being on the defensive with locks, guns and etc.

Stories, recollections and events are based on those of a small group of men who shared their lives and deaths in a jungle infested with evil. The images, sounds and memories came from their hearts and minds and, on several occasions, from the depths of their souls.

Q) How do you feel about the way the book has been received by readers?

A) I am very happy the book has been received so well by those who have read it. However, I know Jerry wanted the book to reach lots of people and I am still trying to get it out there to fulfil his dream. He said he had to let people know what went on in Vietnam, not for himself, but for the guys in his team that did not make it home. I also believe it was a mental release for Jerryand I hope he found some peace before his passing.

In the Covert Recon team, each man’s reality in his everyday life in an undeclared covert war was different from another’s reality, but they were no less real…This writing is not for those with weak stomachs or those who are not open-minded about what men do in war and what war does to men. It is painfully graphic at times, but events and people are described in such a way that one might understand how things happened when surrounded by the worst of humanity and the instincts to survive.

Q) Recently, you started a Facebook page for the book. How do you feel about the way the page has grown?

A) I love the new Facebook page and am quite surprised with all the likes and messages.

…My sleepless nights, torment, anger and tortured memories are no more or less than any of those felt by the brave men and women who served in similar conditions. I understand their realities and hope they understand mine.

Q) Can you see “Covert The Not Known” as a movie?

A) Oh yes, I see “Covert The Not Known” as an action packed movie. I just hope someone else will see the value of making it into a movie. I would really like to see it on the big screen while I am still on this earth to know all of Jerry’s dreams have come true. 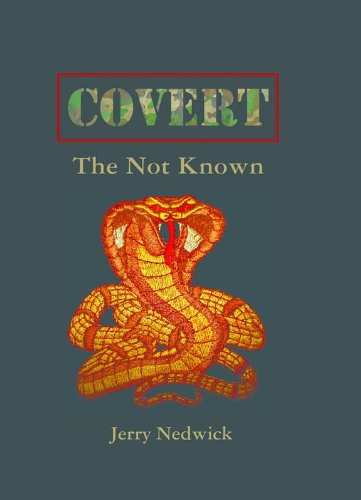