Mike Trahan announced yesterday that there may be a third book in store for his readers. The book will focus on his experiences as a Delta pilot after the Vietnam war. Mike said recently that the story would be the most fascinating of the trilogy and he can’t wait to get things written down and out there.

Recently, Mike released his second book The Gift Part Two: The Air Force Years to rave results. His fans have already said that this volume surpassed the first in content and style of writing. Mike has already got a hit on his hands and the fans’ approval of a second and third volume just shows that he is beginning to gel with his readers. Sales have now started to mount up from around the world. 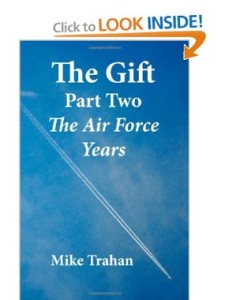 The Gift Part Two is scheduled for release as a Kindle book in the near future. The story tells of Mike’s experiences in war torn Vietnam. He undertook many hair-raising flights and writes frankly about the day-to-day struggles military and Air Force personnel faced. The story is a tell-all, honest and frightening account of a subject many have forgotten about. In the process of battling with the returning warriors, many have forgotten the horrors the warriors faced.

Mike makes no political statement about the war. As a true patriot, he talks only of the duty he was expected to fulfil. He talks about what he faced, what he dealt with and what he went through. There is no doubting the honesty of this Texan who has no tall tales to tell.

The first book Mike Trahan wrote was called The Gift and had a rave run of five star reviews from readers. To celebrate the book’s release, Mike organised a book signing and was left amazed as all copies of his first book were whisked away by anxious readers…

This is an extraordinary personal story of ordinary events coming together to shape a young man’s life. Mike Trahan is a talented storyteller and writer who draws the reader into his early years growing up in East Texas in the `50s and `60s. His love of family, devotion to church, and passion for sports become the nexus to an early fervor to fly and “…slip the surly bonds of earth.” This authentic and personal account details his quest to fly.

As Mike is dealt life’s cards, the reader feels his failures and disappointments and celebrates his successes. As he prevails over setbacks, he achieves his goals – receiving his commission as an Air Force lieutenant and going through USAF flight training. This is a story for those who remember that time and for those interested in how we construct our individual identities.~ Five Stars

This is a wonderful autobiography. It’s warm, candid, motivational, human, upbeat. All attributes that reflect its author, Mike Trahan a man I’ve known for a half century

Mike has done a splendid job explaining the process whereby, at an early age, he found his focus. It captivated me. It also made me appreciate how precious an experience this was for him.

And rare too. Unlike so many others, Mike knew what he wanted to do and, to his enduring credit, he set about achieving his goal. What I find motivational is he succeeded, and then some.

And, since the book takes readers only to his mid-twenties, a follow-on edition will give us more about his rich and interesting life, including flying low level combat missions in the Vietnam War, a very divisive event for his generation.

Stylistically, his prose is unaffected by obtuse meanings or by complicated verbiage. It is simply as endearing as the man who found his path early on and followed it to a fulsome life during which he made friends galore.

I’m one of them, and you will be too once you meet him, something you’ll want to do after reading his book, “The Gift”~ Five Stars