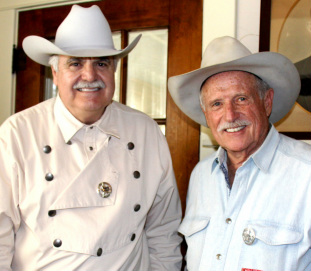 Ken Farmer and Buck Stienke are two of the most exciting writers around today. Their Black Eagle Force series of books have been moving quickly off shelves for monthsand their first western, The Nations, has already become a reader favourite. I have interviewed both Ken and Buck separately, but for our final interview I wanted to do something special.

“I want to do a live interview!”

“Are you crazy?” I was told. “You know how hard you have to work to be understood.”

“Just make sure the people can understand you…”

So, on a hot Saturday afternoon I sat down with Buck and Ken to interview them face-to-face, so to speak. We grooved into the interview and three hours later I had enough material to satisfy my video editor Kevin Diamond. I should make a note here about Kevin. He is one of the most talented video editors in the business today and is a producer for a film company called Angelic Pictures. I couldn’t have done this without him- thanks buddy!

His name is Ken Farmer…

He has appeared in many films and TV shows over his long and successful career. He has been in Silverado, Texas: Walker Ranger, Dallas and Friday Night Lights. Furthermore he has worked with or befriended almost every major Hollywood actor.

He is a master horseman, a born cowboy.

He has directed a movie of his own called Rockabilly Baby which told the story of a rock and roll star with the looks of Elvis Presley and the rock star antic of Jerry Lee Lewis.

He co-runs his own publishing company called Timber Creek Press with his business partner Buck and sits high knowing that each of his co-penned books has been a bestseller.

His name is Buck Stienke…

He was trained by the US Air Force to use a variety of weapons and has a deep technical knowledge of guns and their capabilities.

He is an accomplished flier with years of experience

He has co-written a host of bestsellers with Ken Farmer,  and the books would not be the books without the distinctive touch of Buck Stienke.

Welcome to their world! This interview took place in the office of Buck Stienke’s gun shop in Texas, USA. Below is Part I.  Part II coming soon!

Ken’s and Buck’s books are available on Amazon and also on their website at Timber Creek Press.