Michael Haden is a writer with a message. He wants to spread the word about drink driving. I think his intentions are honourable, and when he approached me for this interview, I knew that it could well be one of the most thought provoking things I have ever written. Michael has taken the life of one young girl he coached, who was sadly killed in a drink driving accident, and has written the rest of her life. He has taken all the would-be questions and turned them into a story with a moral. The book is called A Deal With God. Is it a fascinating read? Yes. A bestseller? Sure, 30,000 copies and rolling. I think most of all, this book is a book that asks why we continually drink and drive? Why do we have to endanger the lives of others? Why can’t we be responsible enough to take a taxi or walk? I think Michael is an excellent writer with a great book, but I am pretty sure he would be the first to admit that he wishes he never had to write it…

Q) Hi, Michael, let me start by asking what helped you make the decision to become a writer?

A) I have a Bachelor’s Degree in Mass Communications. I am a Public Relations/Writing for the Mass Media major. In college, my ACT score on the essay writing part was the highest in the state of Florida. I pursued a profession, water conditioning, because I was starting a family and it was far more profitable. But my passion is writing, even if it is only a one liner in some ad copy.

Q) That qualifies you to be a fiction writer? Would you say some of the news we read and hear in the mass media is made up? Like fiction?

A) Any story, fiction or non-fiction, is better when embellished a little bit. It is the seasoning to the story. People want to enjoy reading your writing or they won’t come back for more–kinda like a restaurant. The majority of the people that read my book said they read it in two days because they couldn’t put it down.

Q) Which “seasoning ingredient” do you think makes your book so readable and addictive?

A) The way I developed the characters. If you don’t love Deana Murphy by the end of the book, you are heartless.

Q) Tell me more about the character of Deana. Who is she?

A) Deana Murphy is a girl I coached in soccer about ten years ago. She has a near unbelievable biography and was one of my best and favorite players. I got her a full-ride soccer scholarship, and she dominated her very first year. She almost made All-American, she was that good. Deana was killed by a drunk driver two weeks before her twentieth birthday while she was home working during summer break.

Q) What drove you to write her story, Michael? What really touched you about Deana?
A) She was killed the summer between her Freshman and Sophomore year. She was an orphan and had no survivors. We all loved her dearly and were devastated by the loss. I didn’t want her death to be in vain. When I appeared on Studio Ten, over one million viewers found out her story. If my promotion of her story stops one impaired person from causing a fatal car wreck, my project is a success.

Q) I guess one of the key points you are trying to drive home is the danger of drink driving. Do you think people really realise how dangerous it is to do that?

A) I know some people read the story in the newspaper when it happened and thought it was sad. But the average person does not understand how exponentially tragic the loss really is. That is why I wrote the book. The books answers questions in her life– the questions that tell the story of what might have been.

Q) How did you approach the “what might have been” questions regarding her life?

A) I took all of Deana’s amazing aptitudes and rolled it into a mission from God mandate. I wanted to show how much she could have accomplished if it were not for someone’s gross negligence. Within ten years, she drastically and positively influences the lives of over 1000 people. She helps an an entire town with her faith, devotion, and lifeskills.

Q) What was the most difficult part of writing a book that really could have gone anywhere and taken her to great heights or great lows– many of which are outside of the reality of her life?

A) The mandates from God were very difficult and complicated. She told God she would do anything if He would send her back. He forewarns her it will be a difficult life in a take-it-or-leave-it proposition. She takes it, not knowing how tough it will actually be.

Q) It must have been tough for you to write this book. I can imagine it being an emotionally draining experience to write the story of someone you knew and respected so much. How did you personally find the process of writing a book with such an emotional attachment to yourself?

A) I lost twenty-five pounds during the actual three months I wrote the crux of the book. I broke down multiple times, especially writing chapters 11 and 13.

It was a really creative experience though. I remember once, when I was in my truck on a long drive to a job far away, and a cool story line came to me. It was like a movie playing in my head. It was very engrossing and I starting telling the story to my friends and relatives and they all loved it. I would spend all day thinking about what I would write that night, write all night, then type and edit it in the morning. 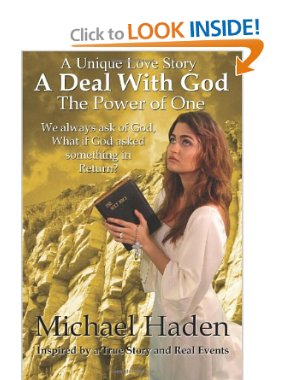 Q) Many writers say that the process of writing a book can be compulsive. Would you say you had a compulsive need to write?

A) That would be a good way to put it.

Q) Let’s talk about the actual publishing experience you went through. How did you find the process of getting your book into print?

A) I self-published the book. We tried getting an agent to get us a major publisher, but it is like pulling teeth. We–me and my IT guy Adam who formatted the book–got fed up with the process and did it ourselves.

Q) What would your advice be to a newbie writer? Traditional publishing or self-publishing? Which one would you promote?

A) It depends on your appetite to market the product yourself or have someone else do it. I enjoy marketing, so it worked for me.

Q) As a self-published author, how have you found sales so far?

A) Over 30.000 people have read my book and over 90% have absolutely loved it. A few people on Kindle library and tried to speed read weren’t as happy, but that is because the book has five sub-plots. If you speed read the book, you will miss them. Everyone that read the whole thing and understands what I am doing with the project loves it.

Q) I have to ask, Michael. Have you got a new book on the way?
A) It depends how successful this one is. It does have the potential to be an interesting series. I have Deal II’s story line all written. I just have to do the research.

Q) Thank you for your time, Michael. It has been a pleasure!

You can connect with Michael at his website and on his Facebook page for A Deal with God.